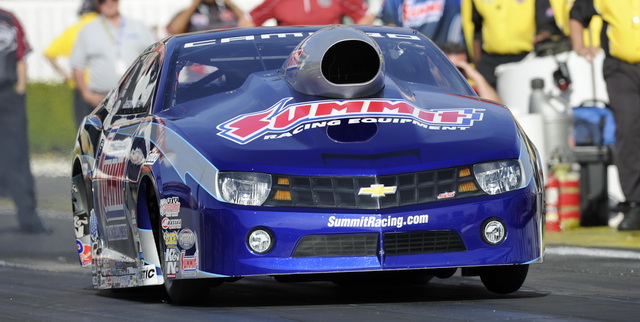 Summit Racing Pro Stock driver Jason Line (above) reached a milestone in Houston this past weekend (Apr. 26-28), as he wheeled his Summit Racing Chevrolet Camaro to a win at the O’Reilly Auto Parts NHRA SpringNationals at Royal Purple Raceway to earn the 30th victory of his professional career in his 63rd final round.

Line, the No. 4 qualifier, survived a fortunate first round by a narrow .0002-second margin of victory over Matt Hartford and reeled in a win over a very traction-troubled Erica Enders-Stevens in round two with the second-quickest pass of the round, a 6.582 at 212.09 mph. 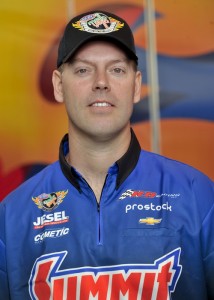 In the semifinals, the Mooresville, N.C.-transplant who hails from Minnesota kicked his driving into high gear and left the starting line with an awesome .010-second reaction time that edged Jeg Coughlin’s .012. At the finish line stripe, it was all Line as he made the quickest and fastest run of the round, 6.580 at 212.06, and advanced to the final for the first time this season.

With the trophy in sight, Line was focused and determined, and he dropped the clutch well ahead of No. 2 qualifier and final-round opponent Shane Gray with a .007-second reaction time to Gray’s .055. The sizable advantage was absolutely necessary at the top end when the scoreboards flashed identical 6.589 e.t.’s and matching 211 mph speeds.

“I wasn’t going to be late [in reaction time], that was definitely not in my plan,” said Line, who also won in Houston in 2007. “They’ve been running well, and knew I needed to leave first in my Summit Racing Camaro. I was trying, and fortunately, I was able to accomplish what I set out to do. It turned out well, and it was cool to do on live TV too.”

The live broadcast was a homerun for race fans, who were able to watch the semifinal and final rounds live from home on ESPN2, and the circumstances provided a high-pressure adrenaline rush for the teams as they thrashed between rounds to make the call. The KB Racing team and their fellow Pro Stock competitors were also faced with the challenge of racing on a very green track following persistent rainstorms that washed away the second day of qualifying at the event.

“It’s always tough when that happens,” said Line. “It was especially tough for us because we’ve been a little lost lately. But today, it worked out for Team Summit. I’m not sure how, I’ll have to go back and look at everything to try to understand how it all worked out the way it did, but we’re happy.”

For Line, the victory was a long time coming. Surprisingly, the Summit Racing team had yet to earn their first win of the season before this weekend’s NHRA SpringNationals, the sixth race of 24 in the 2013 Mello Yello Drag Racing Series.

“We wanted to get a win at the first race of the season in Pomona,” said Line. “This is a work in progress, and we made it down the racetrack six times in a row, which is something we haven’t done all year.

“We’ve struggled, and it’s been a fight. After awhile, you start to wonder if you’ll ever get to the winner’s circle again, so this feels really good. It’s good for us, it’s good for Summit Racing Equipment, it’s good for our team owner Ken Black, and it’s good for all of the guys who work hard on the team and put in all the effort. It was a good weekend.”

Line also took time after the win to thank those whose support makes days like today possible.

“Naturally, we could not do this without the support of several great people and companies,” said Line.  “Of course, it all starts with Ken and Judy Black.  Also at the very top of the list is Summit Racing Equipment, and their many employees, who we are so proud to represent.

“In addition, we want to thank Chevrolet, Maxima Oils, Cometic Gaskets, Mac Tools, PAC Valve Springs, CP Carillo, K&N Filters, Speed Dawg Shift Knobs, Wiley-X and everyone else whose involvement with our race team makes days like today possible.  We are glad to bring them this win.”