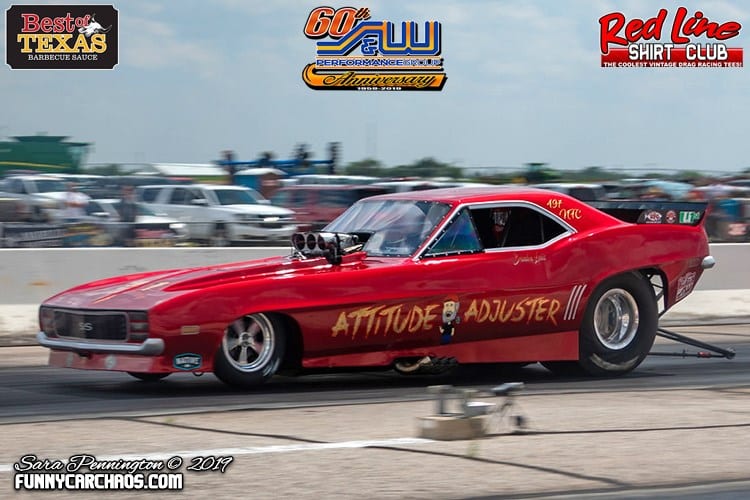 The third event of the 2019 Best of Texas BBQ Sauce Championship tour presented by Red Line Shirt Club brought the series back to historic Amarillo Dragway for the second annual Funny Car Chaos event, May 31st & June 1st. Funny Car hungry fans highly anticipated the return of the series to the Texas panhandle and seventeen cars came to compete for a spot in the quick sixteen main event. With precious points on the line, every run counts for those in the running for the inaugural Funny Car Chaos Championship and Friday night welcomed fabulous weather and a great crowd for two qualifying sessions under the lights.

Ken Singleton and the “High Risk” screw blown alcohol burning Monte Carlo from Oklahoma took the top spot with a 4.10 at 191 mph pass followed closely by Nick Poloson in the “Bucket List” nitro machine with a 4.16 at 178 mph. Local favorite Clay Cunningham put the “Still Crazy” entry into the third position with a 4.39 at 163 mph as Brandon Lewis and Mark Billington rounded out the top five after Friday’s qualifying rounds. A wild match race between Ray Kelley’s jet dragster and John Robinson’s turbo diesel dragster closed the feature on Friday night as teams returned to the pits to prepare for final qualifying and eliminations on Saturday.

Race day welcomed more sunshine and pleasant temperatures in Amarillo as the gates opened and fans steadily found their spots in the stands and tailgaters set up down the spectator side fence line. The racers all shared how enjoyable it was to tow back to the pit area as the return road took the teams right in front of the spectator side fence allowing the fans to cheer their favorites on. It was all systems go with a huge line up of drag racing on tap including the Dirty South Gassers, Outlaw Nostalgia Shootout and Outlaw 6.80 Index classes.

The final qualifying session got underway and Brandon Lewis’ “Attitude Adjuster” ex. John Hale owned 1969 Camaro fuel flopper jumped to the number three spot with a nice 4.29 at 177 mph. Ray Stringer, Keith Jackson and Tod Barker all earned spots in the Rodak’s Custom Coffee ‘A’ field with a bump spot of 4.63 at 160 mph. The AlkyDigger ‘B’ field was led by Andy Mears’ “Dragon Slayer” 1957 Chevy from Lubbock with a 4.67 at 148 mph. Mo-Kan ‘B’ field winner Matt Nissen was in attendance, but engine damage suffered on Friday night ended his weekend early, allowing first alternate Larry Bradford and the “American Dream” team to join the field as sixteen cars were ready for first round eliminations.

The call came out from Chaos announcer David Rattan for the Rodak’s Custom Coffee ‘A’ field to head to the staging lanes as the gloves were ready to come off and it was time to play for keeps. The run schedule was moved up one hour by series director Chris Graves as the forecast called for strong changes of rain late in the evening. Ray Stringer brought his new look Oldsmobile Cutlass nitro burning Chevy to the line having just been named “Best Appearing Car” courtesy of Tony Lewis Collision & Paint. Stringer was paired with Brandon Lewis in an all nitro affair to kick off eliminations. Stringer was off the line first but just ran out of muscle as his 4.50 at 159 was no match for Lewis’ 4.17 at 183 mph.

Keith Jackson’s “High Heaven” and Nick Poloson in the Doak family owned “Bucket List” fired up next in another all nitro bout. Poloson made his best lap of the weekend with a 4.10 at 180 mph to take out Jackson’s 4.46 at 157 mph. Next up Mark Billington brought his big show legal Top Alcohol funny car to the line against Clay Cunningham. Cunningham took a huge starting line advantage but ran out of ponies as Billington’s nice 4.16 at 175 mph drove around Cunningham’s 4.66 at 161 mph. The final pair of first round ‘A’ field competition brought top qualifier Ken Singleton to the line against Tod Barker. Barker had the “Back in Black” Corvette tuned up and posted his best pass of the weekend with a 4.48 at 160 mph but fell short to Singleton’s winning 4.25 at 186 mph.

AlkyDigger ‘B’ field action immediately got underway with Jordan Ballew in the “Ballew Thunder” taking on alternate Larry Bradford. Bradford blasted off the line first and posted his best pass of the weekend with a 5.05 at 143 mph, but came up short at the stripe as Ballew used a 4.89 at 143 mph to drive around for the win in a close one. Top qualifier Andy Mears was out next alongside Robert Slaughter and Mears’ 4.80 at 145 mph took out Slaughter’s 6.04 at 114 mph.

Kebin Kinsley posted an ‘A’ field runner up finish at the season opener driving the Farris family owned “War Wagon” but this weekend was behind the wheel of his own “Wild Child” Mustang bodied fueler and lined up with Jeff Cameron’s “Magnolia Missile” in first round. Cameron blasted off the line with the best reaction time of the round, earning the Taylor Motorsports Products “Quick Reaction Time” bonus and his 4.96 at 138 mph took out Kinsley who had mechanical issues, struggling to a 8.10 at 64 mph. In the final pair of ‘B’ field action, Mo-Kan runner up Nick Johnson came to the line in Wayne Reinart’s alcohol burning “Prairie Fire” against Chuck Loftin’s “Motivation” nitro machine. Loftin had struggled thus far, but came up with a solid run when it mattered most as his 4.43 at 154 mph took out Johnson’s 4.82 at 145 mph.

The semi-finals were delayed by a pop-up shower. After a brief drying session, the floppers were back in the lanes and fans were ready to see which drivers would take it to the final. In a nail biting Rodak’s Custom Coffee ‘A’ field semi, Brandon Lewis and Nick Poloson got the action started in their fuel funnies. Poloson took a slight starting line advantage and was straight and smooth in the “Bucket List” while Lewis had his hands full as the car drifted to the wall, then back to the centerline. Lewis held on, wide open and white knuckle to drive around at the stripe with a winning 4.12 at 178 mph to Poloson’s close 4.18 at 178 mph.

Next up brought Ken Singleton and Mark Billington to the line in a powerhouse match up of modern bodied alcohol burners. Revved up and ready to go, at the flash of amber Singleton was off first with a slight advantage, which Billington had already made up by sixty feet. Billington had a nose out in front at 330, but at the stripe Singleton muscled his way to the win light with a 4.16 at 185 mph to Billington’s extremely close 4.19 at 176 mph for an .021 margin of victory. Lewis was headed to his first career Chaos final in his rookie season on tour, while Singleton was in familiar territory winning three ‘A’ fields in 2018 including Amarillo, but in search of his first win of 2019.

AlkyDigger ‘B’ field semi-finalists were ready for action that kicked off with ‘dry hop king’ Jordan Ballew facing off with Jeff Cameron who had not only earned his first career Chaos round win, but also claimed the “Long Haul Bonus” courtesy of A Glass Company in Amarillo. Ballew never trailed in this one as his 4.98 at 140 mph held off Cameron’s 5.29 at 138 mph. Andy Mears and Chuck Loftin fired up next to see who would face Ballew in the ‘B’ field final. Mears took a healthy starting line advantage but at the stripe his 4.71 at 146 mph was no match for Loftin’s best pass of the weekend with a 4.39 at 168 mph. Loftin was headed to his first career Chaos final in his rookie season on tour to face off with the youngest driver on tour Jordan Ballew, who was looking for his second win of the 2019 season.

With a storm system brewing and targeted with a bullseye on Amarillo Dragway, the rush was on to get the final round cars serviced and back to the lanes. Teams thrashed in the pits and made it back to the line with dark grey skies rapidly approaching. The AlkyDigger ‘B’ field came to life first as Ballew and Loftin staged their machines and crew chiefs walked away after their final adjustments. The drivers were off the line together but Ballew quickly lost power and pulled to the side while Loftin ripped off his best pass of the weekend with a 4.26 at 170 mph to claim his first career Funny Car Chaos victory!

The Rodak’s Custom Coffee ‘A’ field finalists came to life as Brandon Lewis and Ken Singleton took the stage in a nitro versus alcohol battle. Singleton ripped off the line with a large starting line advantage but his performance fell off, while Lewis and his Guy Tipton tuned team saved their best for last with a 4.10 at 184 mph to clinch their first Funny Car Chaos victory over Singleton’s 4.41 at 176 mph!

“With a proven car and a proven tuner, I know I need to bring my ‘A’ game to every race. Having raced Pro Mods for the last nine years, I had some adjustments to make in the cockpit to re-establish my driving abilities from our TAFC days. Nitro is a different animal. The center steer driving style all came back to me in Amarillo. The car improved on every lap and we proved to be the car to beat at the end of the night. I want to thank my family and crew, they busted their butts between rounds and I’m thankful to get the win for them. We’re looking forward to the rest of the season and hope to double up with a win at Lufkin in a few weeks,” said Brandon Lewis.