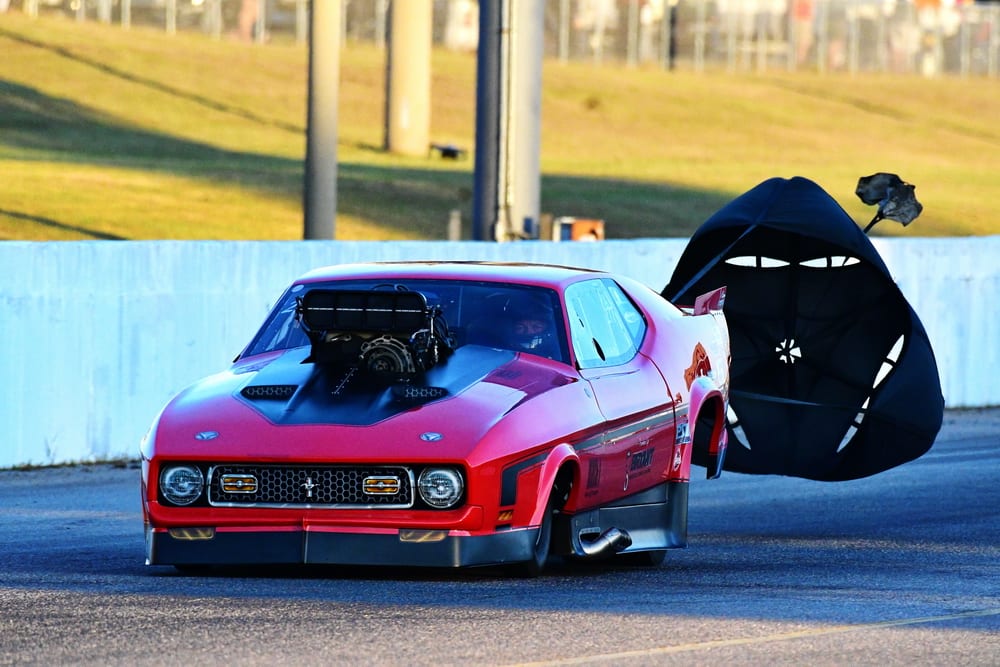 In addition to the PDRA’s touring five professional classes and four sportsman categories, East Coast Auto Transport Extreme Outlaw 632 and Porter Electric Outlaw 10.5 filled out the World Finals lineup. Dillon Voss in his ’17 Corvette leads Extreme Outlaw 632 with a 4.309 at 165.99 mph. Mike Decker Jr. is the Outlaw 10.5 provisional No. 1 qualifier with his 3.945 at 197.22.

North Carolina logger Terry Leggett charged to the No. 1 spot in Pro Extreme, using a 3.549 at 215.41 to hold off championship hopefuls Mattias Wulcan and Mike Recchia. Mathematically unable to win the championship, Leggett is set on winning the race in his Terry Coyle-tuned ’71 Mustang, even if it means upsetting the title contenders.

“I’m hoping I don’t end up in the middle of that (championship battle),” Leggett said. “I hope they have to run someone else or even each other. I don’t want to be the decision maker because we’re going to try to whoop whoever we line up against. I think the world of all these guys, but we came here to win the race.”

Defending Pro Nitrous world champion Tommy Franklin began his World Finals weekend by announcing that Franklin Companies LLC had reached an agreement to purchase Virginia Motorsports Park. Seemingly undistracted by the new venture, Franklin uncorked a blistering 3.653 at 205.44 in his Musi-powered “Jungle Rat” ’69 Camaro to earn the provision No. 1 spot. He will be the new elapsed-time record holder if he can back up the run on Saturday.

“It feels good to come here and be the No. 1 qualifier,” said Franklin, who is leading the points over Jay Cox. “We’re fighting for this championship. It’s going to be a tough battle, but we’re doing what we need to do. The primary thing is just getting up and down the racetrack. We’re making the right calls for the racetrack. I thought we could’ve went .63 or .64, but the water grains held us up. This run gives us confidence. We just need to build on it and take this one round at a time.” 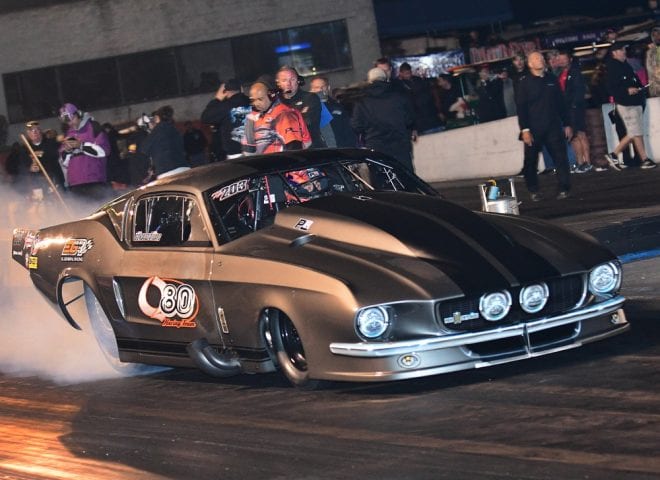 Points leader Jose Gonzales reset both ends of the Pro Boost national record when his turbocharged “Eleanor” ’67 Mustang crossed the finish line in 3.658 seconds at 215.75 during the third session. Gonzales’s tuner and Pro Line Racing teammate, Eric Dillard, sits behind him in second after wheeling the turbocharged Q80 Racing ’69 Camaro to a 3.669 pass at 200.23. Tractor pulling national champion John Strickland is third after posting a 3.712 at 201.64 in the Roots-blown GALOT Motorsports ’69 Camaro.

“The pressure is off in the sense that we don’t have to worry about the championship, but the pressure is on to be the first to run in the threes,” said Goforth, a three-time winner this season. “We sent three motors back to Sonny’s (Racing Engines) after GALOT just to find some more power for this weekend. We ran 4.006 in testing yesterday when the conditions were the best I think we’ll see this weekend. It was a priority to make a three-second run, but it might have eluded us. Everything will need to be exactly right, and we’re doing everything we can on our end to make that happen.”

Chris Garner-Jones was attempting to join an elite list of Pro Extreme Motorcycle riders who have dipped into the three-second zone when he fired off a 4.004 at 177.18 in the third session.
After coming so close, the 28-year-old rider believes his T.T. Jones Racing Hayabusa has a chance to break out of the fours on Saturday.

“We were definitely looking for a three, but our 60-foot time was off a bit,” Garner-Jones said. “We picked up performance at the 330-foot mark and picked up speed, but the early number wasn’t there. But now we know that a three-second run is definitely possible tomorrow. We’re focused on getting the win, but a three would be nice.”

Ninety Top Sportsman entries made qualifying attempts during the first two sessions, easily filling up the Elite 16 and Top Sportsman 32 fields with dozens of alternates. Two-time NHRA Pro Stock Motorcycle world champion Matt Smith leads the Elite 16 field with a 3.775 at 198.88 in Henry Dogay’s “Cajun Nightmare” ’68 Camaro. Virginia-based engine builder Billy “The Kid” Albert is second in Stan Nance’s ’17 Camaro with a 3.818 at 194.77, with 2014 Top Dragster world champion Travis “Carolina Kid” Harvey in third with a 3.887 at 184.84.

North Carolina’s Jeremy Creasman finished Friday qualifying as the No. 1 qualifier for the second consecutive race, charging to a 3.735 at 192.25 in his ProCharger-boosted dragster. Defending world champion Justin Kirk is second in the supercharged Glockner Truck Plaza dragster with a 3.806 at 188.83, followed by Greg Curtis and his Ohio-based dragster with a 3.815 at 186.72.

The 3rd annual Brian Olson Memorial PDRA World Finals will continue Saturday with a final qualifying session for all categories, beginning with Edelbrock Bracket Bash at 8:15 a.m. Pro eliminations are scheduled to begin at 4:30 p.m.