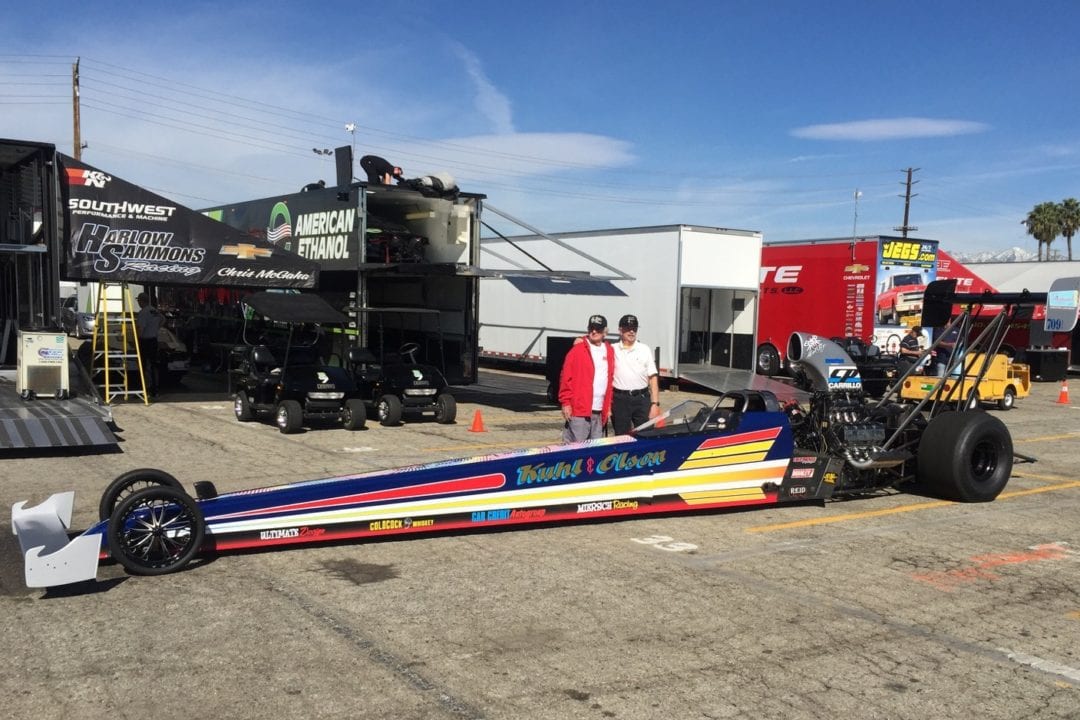 45 years after the formidable duo of 2012 International Drag Racing Hall of Fame inductees Mike Kuhl and Carl Olson ran rampant at the 1972 Winternationals to win the Top Fuel category, Miersch Racing will pay tribute to the legendary team by running a special Kuhl & Olson design on its injected nitro dragster in the Top Alcohol Dragster category at the 2017 NHRA Circle K Winternationals, Feb. 9-12.

The dragster will emulate the design of the Kuhl & Olson team’s first rear-engine dragster which earned Best Appearing Car honors at the 1971 U.S. Nationals and won the Winternationals the next season. Tim Sieger of Ultimate Design produced and applied the vinyl graphics.

The tuning and engine building talents of Kuhl, the driving ability and racing acumen of Olson, and their fast and aesthetically-pleasing dragsters made them one of the most iconic Top Fuel teams in the Southern California drag racing hotbed from 1971 through 1974 with Olson driving and in 1975 and 1976 with other drivers. Besides their 1972 Winternationals victory, other accomplishments include winning the March Meet, The Last Drag Race at Lions Drag Strip, the 1972 IHRA championship, and being the 14th members of the Cragar 5-Second Club.

Following their successful and popular run as a drag racing team, Kuhl and Olson each found success in their later careers. Kuhl expanded on his engine building business to become a prominent supercharger manufacturer, and he opened Kuhl’s Klassic Restoration after selling the business in 2001. Olson has had a long career in the motorsports industry that includes long stints with NHRA, SEMA, and SFI. They were both celebrated at the 2007 California Hot Rod Reunion presented by Automobile Club of Southern California where they earned the Lifetime Achievement Award.

“I’ve been so lucky to grow up at the race track around legends of the sport, and I really wanted to pay tribute to them, particularly Kuhl & Olson,” said Larry Miersch, team owner and tuner. “They are such an iconic team with deep roots in Southern California who have each made their marks on the sport and the industry. The body of the dragster turned out beautiful. I hope the weekend goes as good as the car looks.

“I was talking about this with the Donnell family, who were also close to Mike Kuhl through boat racing and drag racing, and this came together with Jason Donnell’s involvement with his company, Car Credit Auto Group in Corona [Calif.]. Mike will be at the race with his Cacklefest car. I can’t wait to see his reaction.”

Miersch, who reached the final round at this event in 2012 and tuned his dragster to runner-up finishes with Cameron Ferre at the helm at the 2014 Auto Club NHRA Finals and 2015 U.S. Nationals, is a multiple-time BMX champion who bases his team in Huntington Beach, Calif. His A/Fuel dragster will be driven by second-generation racer James Day, who won the 2014 March Meet in Gary Turner’s Nostalgia Funny Car.

“It’s definitely going to be awesome to represent Kuhl & Olson and celebrate their achievements,” said Day. “I’ve been racing in the nostalgia ranks for a long time, and I love being around all the guys who pioneered the sport. They are real drag racers.

“Larry has all best parts and pieces, knows how to make an A/Fuel car run, and has a great group of guys on the team. We hope put the car in the winner’s circle for Kuhl & Olson and also for Larry’s dad, Roy, who is a big part of the team.”