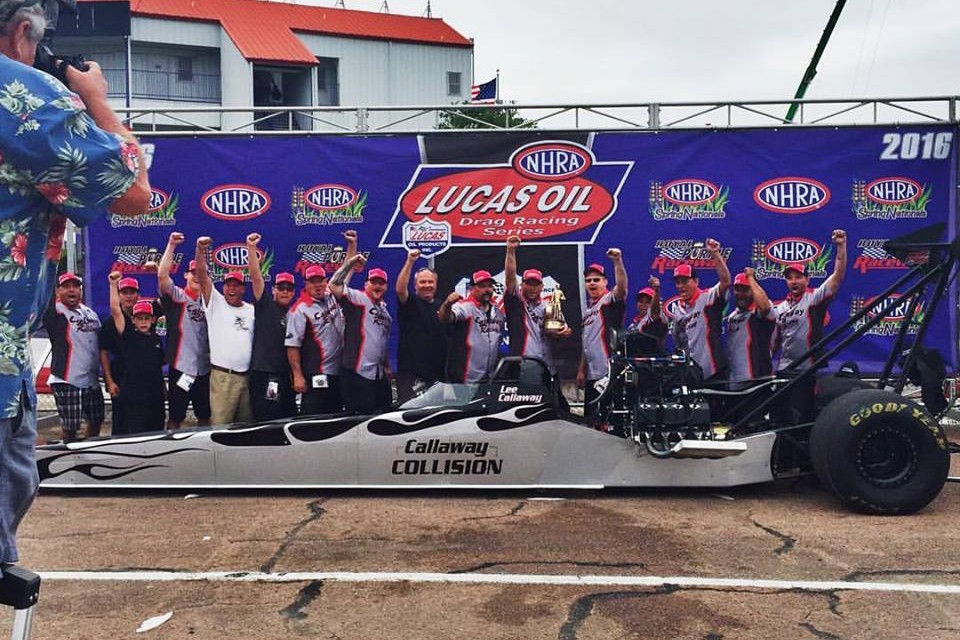 After months of delays and waiting due to the COVID-19 pandemic, NHRA Top Fuel driver Lee Callaway is finally set to make his hometown debut at this weekend’s Mopar Express Lane SpringNationals at Houston Raceway Park. Callaway’s teammate and tuner Scott Palmer both competed at last weekend’s AAA of Texas FallNationals at the Texas Motorplex just south of Dallas as a warm-up of sorts to get ready for Callaway’s hometown debut.

For many years, success eluded Callaway, who lives within earshot of his home track in Baytown, but in 2016, he broke through for his first and only win in the Top Alcohol Dragster category at the SpringNationals that year. While Callaway and Palmer race on a limited budget compared to some of the full-time NHRA teams, Callaway plans to make a hard run at this weekend’s race.

“Last weekend in Dallas was to get back in the swing of things for me,” said Callaway. “We really didn’t know if we were going to go up until the last minute, but I’m really glad we did because I think it set us up to make a good performance this weekend. We plan on making both qualifying sessions on Saturday and see if we ruin some of the bigger team’s plans on Sunday.”

Callaway flies the colors of his collision repair business, Callaway Collision, in Channelview as his primary sponsor, and points out the timing of NHRA’s new series sponsor Camping World matches with Callaway Collision’s new Recreational Division they will open later this year.

“We want to use this weekend’s race to let people know we are about to open up a new Recreational Division at our collision center,” stated Callaway. “So with Camping World coming on, it’s a good fit for us, because RV’s are going to be a big part of what we do in our Recreational Division. This is a big race for us because we have a number of our local business partners supporting us this weekend including Run n Hide Ranch, Aero Septic, Crawfish Hideaway, The Barn, Fitz Roofing, AquaScapes Pools & Spas, Performance Truck and Trailer Repair, Derryberry’s Mechanical Contractors, Elizabeth Tinney REALTOR Keller Williams Preferred, along with longtime Scott Palmer Racing backers Tommy Thompson Racing, Trask and Marck Recycling.”

“We plan on running hard and having a good time with our friends, family and business partners,” Callaway continued.