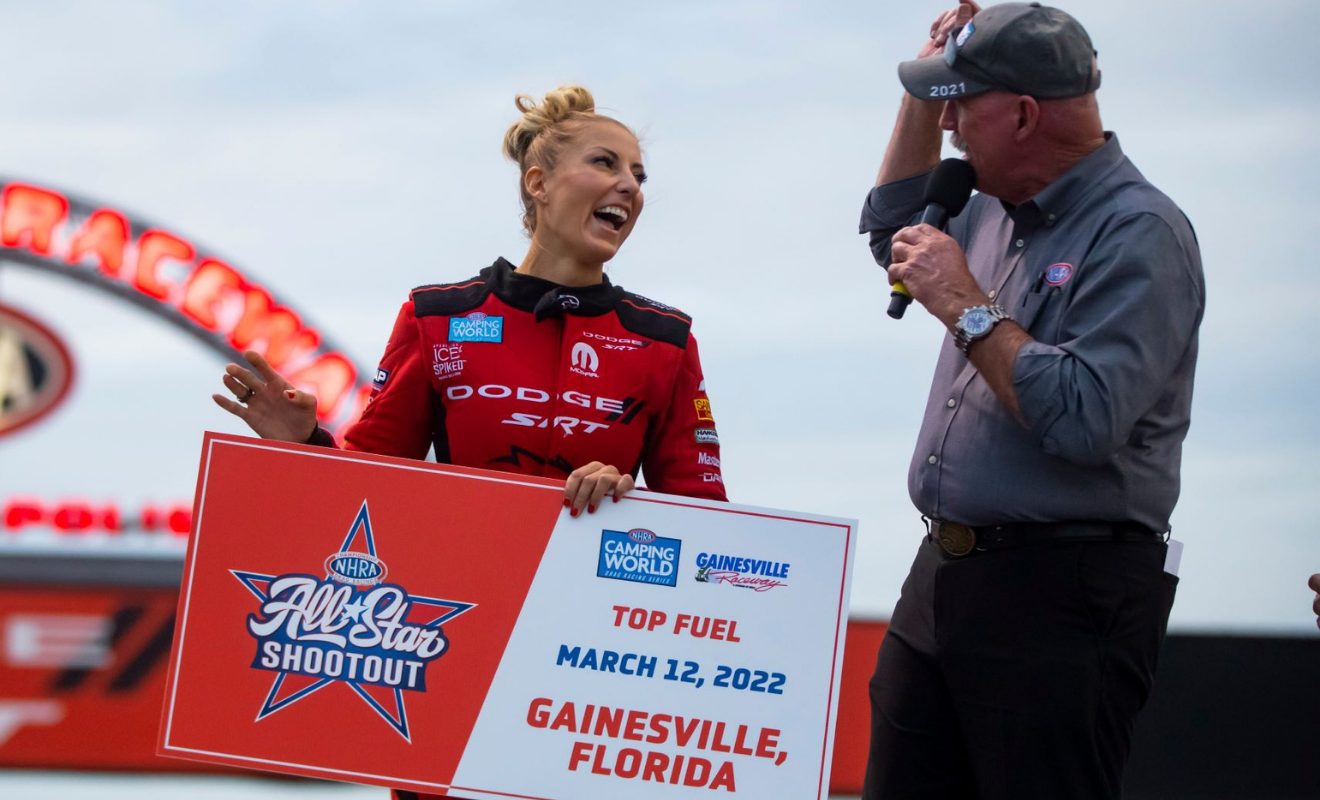 There’s a race within the race during the NHRA Gatornationals this weekend at Gainesville (Fla.) Raceway, and it’ll happen live on FOX.

The north-central Florida track that opened in 1968 and hosted the first Gatornationals event in 1970 plays host to another first on Saturday as part of the NHRA Camping World Drag Racing Series weekend March 10-13. The inaugural Pep Boys NHRA Top Fuel All-Star Callout is a specialty race that pits the top-eight Top Fuel drivers against one another in a winner-take-all event worth $80,000 and televised live on FOX.

The Callout is exactly what it sounds like. Prior to the first round of qualifying on Friday, drivers will “call out” who they want to go up against on Saturday. The first to make a call out is Torrence, who earned the No. 1 seed by virtue of his championship in 2021. He gets to pick from the seven drivers who he wants as his opening-round opponent. Force would get the next pick, provided she is not called out by Torrence. Salinas would follow until all the first-round matchups are set.

TSR’s Pruett earned the sixth seed by way of her seventh-place finish in the 2021 championship combined with her qualifying positions in the first two events of the 2022 season – the NHRA Winternationals Feb. 17-20 in Pomona, California, and the NHRA Arizona Nationals Feb. 25-27 in Chandler, Arizona.

The first round of the Callout will take place at 11:45 a.m. ET on Saturday with the semifinals set to follow at 1:30 p.m. FOX comes on the air at 2 p.m. to recap the action from the first round and semifinals before showing the final round live at 3:15 p.m.

“The Callout has really come full circle for us as I helped introduce it at the U.S. Nationals last year on behalf of Dodge,” Pruett said. “It’s something new and exclusive to the NHRA. With the top-eight being able to qualify into it, it’ll have a different format than what we’re used to. It’ll be a little more outlaw-style and allow us to put on our racer hats, and that’s what excites us about it. For this Dodge team to be qualified into it, it says a lot about our program.”

TSR made its NHRA debut at the season-opening Winternationals. In addition to fielding a fulltime Top Fuel entry for Pruett, TSR also campaigns a Funny Car for 39-time event winner and three-time Funny Car champion Matt Hagan. The $80,000 prize for winning the Callout can certainly assist the first-year team.

“Just to have a chance at getting those extra funds for TSR means a lot,” Pruett said. “The money can go toward our backup car, research and development, and extra test sessions. We have very qualified people on our team and those extra resources matter. The guys out here work for a bonus, and this is a bonus race for everyone across the board.”