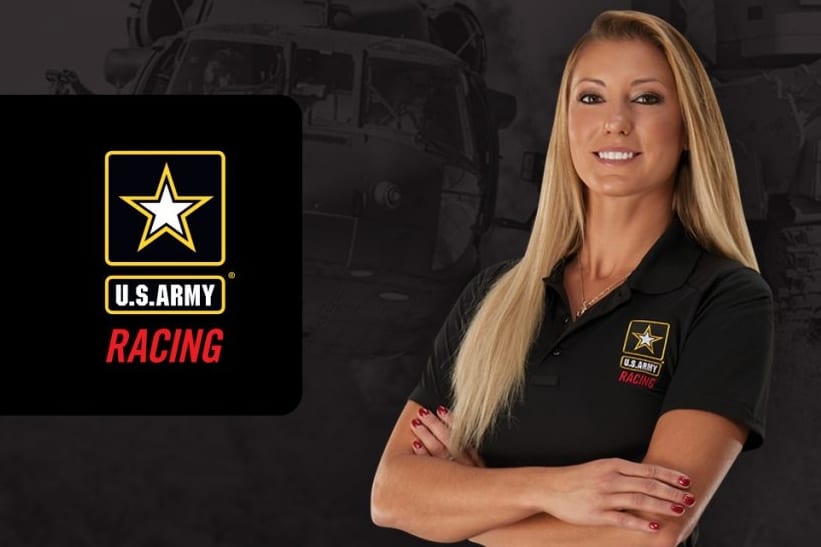 U.S. Army Racing has bolstered its 11-time championship-winning Top Fuel driver lineup of Tony “The Sarge” Schumacher and Antron Brown with the addition of fellow Don Schumacher Racing (DSR) driver Leah Pritchett and her team for the 2018 NHRA Mello Yello Drag Racing Series season, it was announced Tuesday in preparation for this weekend’s annual NHRA Nitro Preseason Test Days at Wild Horse Pass Motorsports Park on the outskirts of Phoenix.

Pritchett and the DSR Mopar/U.S. Army Dragster team will join eight-time champion Schumacher and three-time champion Brown when the Army Racing heritage marches into its 18th full season of NHRA competition since “The Sarge” debuted the U.S. Army colors on his DSR Dragster at the prestigious U.S. Nationals just outside Indianapolis in September 2000.

“Throughout the U.S. Army’s 17-year partnership with DSR, the Army colors have exhibited dominance and resilience with one of the most elite organizations in all of motorsports,” said Elizabeth Wilson, deputy assistant secretary of the Army for Marketing and Director of the Army Marketing Research Group. “Tony Schumacher, Antron Brown and their respective teams have been the ultimate representatives of our more than 1 million U.S. Army Soldiers around the world. And today, we are extremely proud to welcome Leah Pritchett to the Army Racing family and look forward to the addition of a third championship-contending driver and team to the lineup.”

In addition to representing the U.S. Army on the racetrack during the 24-event NHRA Mello Yello Drag Racing Series campaign, Pritchett will join Schumacher and Brown in the Army’s initiatives away from the track, including local high school programs at each track on the circuit, the Army’s Centers of Influence (COI) and the NHRA’s Youth & Education Services (YES) events during race weekends throughout the season.

“This is one of the most prestigious partnerships of my career and for our team, and we look forward to joining this very successful Army duo of Tony and Antron, creating the U.S. Army trifecta,” said Pritchett, who is coming off a powerful 2017 season that included four event titles in six final-round appearances. “This is a tremendous opportunity for us, to represent the Soldiers who serve and enable us to do what we love. Tony and Antron have had an insurmountable impact on my life. I am humbled and honored to join them in representing the U.S. Army, and our team is inspired not just rise to our expectations for next year, but to elevate our training even further. On a personal note, Tony was my first favorite driver in the NHRA. I met him even before the U.S. Army partnership began for him and watched him from the other side of the ropes. I’ve always seen Antron as a role model since his switch to Top Fuel. As every year becomes slightly more surreal, this is yet another new chapter, one that carries the prestige and the honor with my two teammates of representing Soldiers around the world. Our goal is to win on the track for my team, win for the Army in the communities we visit, and represent the U.S. Army with our entire heart and soul.”

In her first full season with DSR, Pritchett kicked off 2017 with a victory at the NHRA Winternationals in Pomona, California, her first of four event titles and six final-round appearances on the year. She added six No. 1 qualifying efforts and also set national elapsed time records twice – 3.658 seconds in February at Phoenix, and 3.640 seconds in August at Brainerd, Minnesota. She finished fifth in the final Top Fuel standings after qualifying for the Countdown to the Championship playoffs for the second year in a row.

Schumacher and Brown entered the 2017 season having combined for four Top Fuel world titles in the previous five years. Schumacher and his U.S. Army Dragster for DSR scored an early season victory at the Gatornationals in Gainesville, Florida among his four final-round appearances to up his record total of event titles to 83. He added four No. 1 qualifying efforts to raise his record total in that category to 84. Brown and his Matco Tools/U.S. Army Dragster for DSR brought home four event titles among his 10 final-round appearances and two No. 1 qualifying efforts during his 2017 campaign.

“Leah has been a great DSR teammate and now she is going to strengthen our Army Racing lineup overall,” said Schumacher, who finished eighth in the final standings this season. “She and that team proved their speed right out of the box and she showed up at the track each weekend as one of the cars to beat. Off the track, she brings great marketing capabilities as one of the more colorful spokespeople in this sport. It’s a win-win for everybody involved.”

“I think it’s awesome to have Leah join Tony and me under the Army banner because she has the attitude and the heart of an Army Soldier,” said Brown, who was fourth in the 2017 standings after his back-to-back championships in 2015 and 2016. “She’s resilient, she has the work ethic and the desire – all the Army traits to be able to go out there and do battle on the track. She never quits, never gives up, never says, ‘I can’t,’ just, ‘I will.’ I’m looking forward to having another great Army teammate go out there and do battle with out there.”

The 2018 NHRA Mello Yello Drag Racing Series kicks off Feb. 9 to 11 with the 58th annual NHRA Winternationals at Pomona.