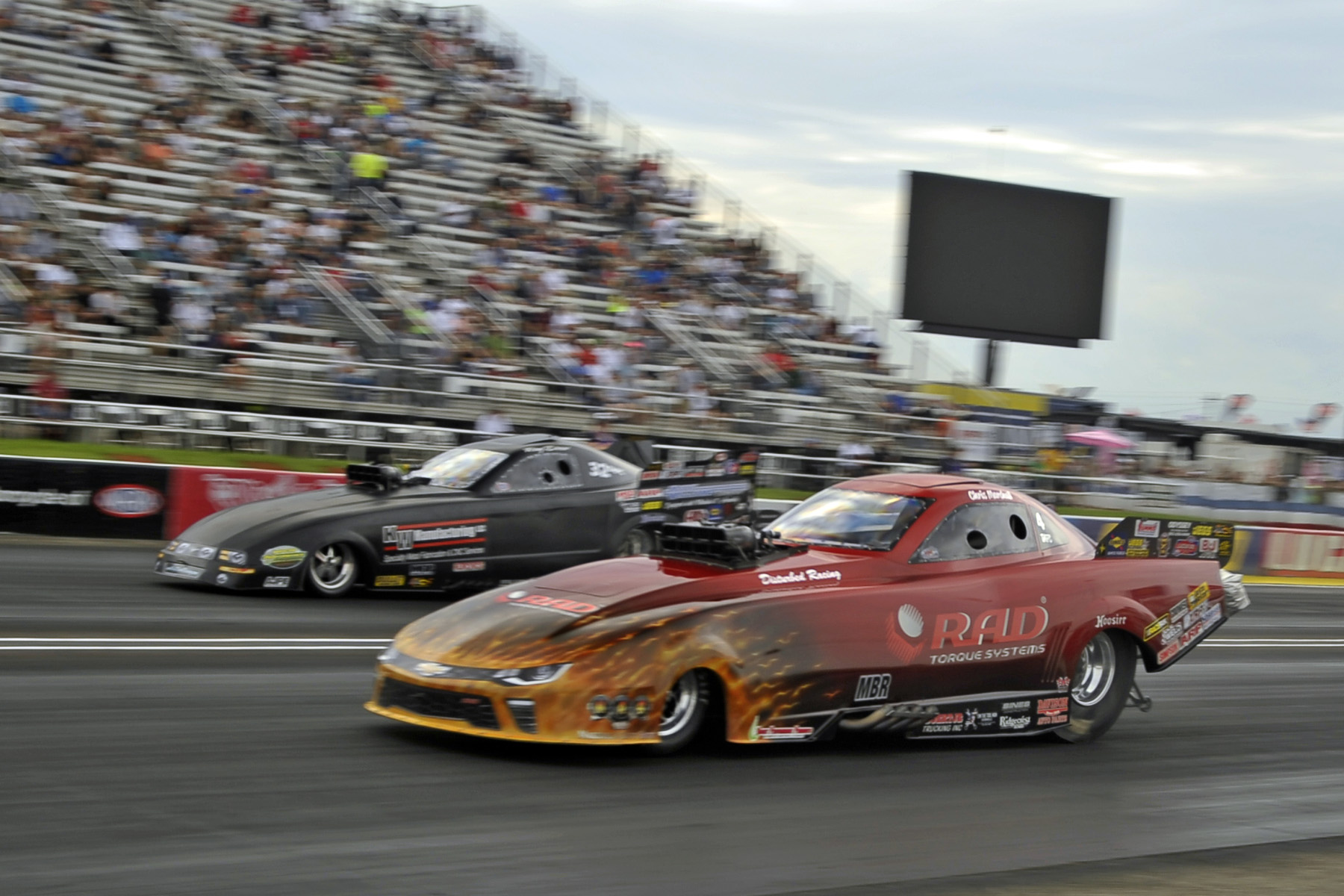 This time last year Chris Marshall was in Indianapolis, Indiana for the first time in his career. In just his third year racing Top Alcohol Funny Car, he seemed to have found his sweet spot, having back-to-back success and taking home the Wally at the NHRA Northwest Nationals in Seattle, then again at the regional event in Seattle. This pivotal moment in his career pushed him to try his hand at The Big Go, and in his rookie debut, he was the No. 1 qualifier and made it to the finals, losing to Sean Bellemeur. It wasn’t the outcome he wanted, but no doubt a solid first appearance at the prestigious race. And while he isn’t the first driver to do it, he did it without any sponsors, funding his entire racing operation himself [with help from his partner, Alan Mascord].

Marshall’s racing career began in 2002, not on a drag strip, but in the mud. In 2010, he moved over to race a Pro Nostalgia Fiat Altered. That’s the same year that he met Alan Mascord while working on a custom project with Mascord’s ‘56 Chevy Belair. Marshall realized that they both shared a love for drag racing, and they formed a partnership to build and field a competitive Top Alcohol Funny Car.

In 2015, Marshall purchased a 2006 rolling Funny Car chassis from the east coast, and it was nothing special. It was never a proven car, and had never even went down the track. He put his sand racing engine in the chassis and got his TAFC license later that year. In 2016, he won his first Wally at the Seattle regional event. The following year he switched to a new, lighter Camaro body, helping him be a bit more competitive, and he won his second Wally in Canada. The following year, he went on to take home four more first place finishes.

With quite a high bar set in 2018, Marshall headed into the 2019 racing season more stressed than usual. His funding was running low with no major sponsors on his car, and he knew he would only be able to race a certain number of times before he was out of money.

“I started the year very determined to win so that we could make some more money to keep racing. This was our last-stitch effort to find someone to pay attention to us,” said Marshall. “This was a lot of pressure, and we didn’t do well. It got in my head and affected my tuning and my driving ability. The thought of racing being over was devastating for me. I didn’t want it to be over. I wasn’t ready to be done.”

In July, Marshall and his wife [Briana] were at a race at his home track, Woodburn Dragstrip, in Woodburn, Oregon, when Dan Provost, owner of RAD Torque Systems, came up and introduced himself.

“He told me that he saw [on Facebook] where we wouldn’t be able to race much more, and he wanted to help. We put together a plan and we’re so thankful to have his financial support for the last few races.”

Marshall says that having backing from RAD Torque Systems has helped clear his mind, and it’s helping him make smarter decisions as a tuner and a driver.

“A lot of our recent success has come from taking a more relaxed approach on the track. It doesn’t take away from my competitiveness, but it takes the desperation away. I know that I can’t win them all, but I know that I am going to be able to race next weekend, even if this weekend doesn’t go how we want it to, and that takes a lot of pressure off me.” 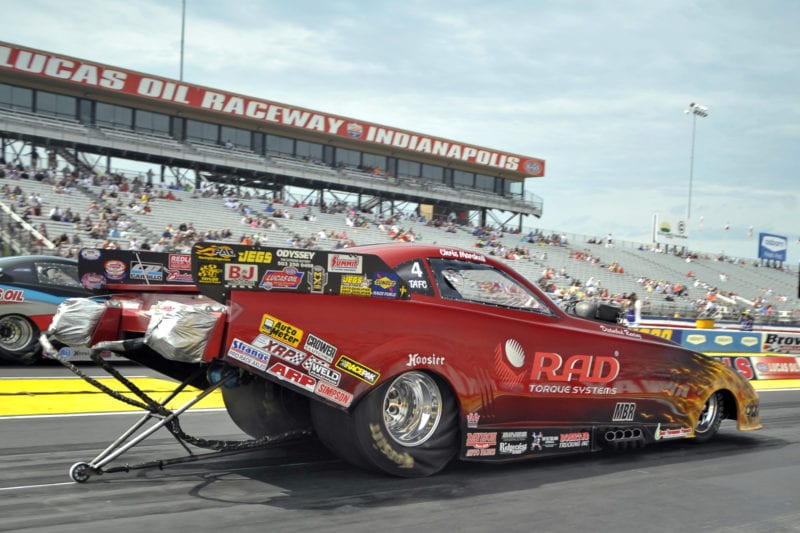 Because of his depleting budget, Marshall didn’t have plans to come back to the U.S. Nationals this year. But after what seems like a repeat of last year, winning both the NHRA national event in Seattle and then again at the Seattle regional event, his new sponsor wanted him to race in Indy. Provost provided the financial backing, and that’s why Marshall is competing at The Big Go this year.

“It wasn’t on our list to come to Indy last year, or this year. But when you win two races back-to-back, you get a little more motivated. So we headed into Indy feeling pretty good.”

Marshall started the weekend with big shoes to fill after qualifying No. 1 last year. While he would have liked to fill those shoes, he had a few issues during qualifying, including blowing up a transmission, that prevented him from getting the No. 1 spot.

One of the unique things about Marshall is that he isn’t just a driver of his RAD Torque Systems-backed Top Alcohol Funny Car, he also services the car and makes all the tuning decisions. And sometimes the decision whether to play it safe or try to hit a homerun can be a tough one.

“I’ve been taking a different approach at tuning my car. One of the hardest things as a tuner is knowing when you have to back down. There are a lot of great drivers and tuners who are much more strategic than me, but I’m trying to follow in their footsteps and hoping it gets me some better results.”

Marshall takes a lot of satisfaction in making a successful run because he knows that he made that happen.

“Driving is hard, but I think tuning is the toughest part. When it’s good, it’s really good, and I know that I did that. It also helps me have a better understanding of what happens in the car because I know what happened on the computer,” says Marshall. “I am definitely self-taught when it comes to tuning. When I first started, I knew nothing about the Racepak thing. It was just a bunch of squiggly lines to me.”

And while Marshall now knows what all of those squiggly lines mean, he still doesn’t use all the data that he could. He says he relies a lot on his common sense.

“I only use a few things from the Racepak for my tuning. There are a lot of parameters and things you can do with the software, but we just don’t use all of those things. If I had all of that data, I wouldn’t know what to do with it. I keep it simple.” And so far, this simplistic approach seems to be working for Marshall.

Fans who watch Marshall on the track are quick to notice the woman who’s backing him up after his burnout. She isn’t just his backup girl, she’s his wife of more than 11 years. Marshall says she is very hands-on when it comes to their racing program, and integral to getting their car down the track every round.

“She grinds all the clutch discs, orders all the parts, manages all of the finances, and keeps everything for our team in order. She’s my biggest cheerleader and she’s with me at every race,” says Marshall.

And when they’re back home in Oregon, they both work together at Marshall’s Auto Body & Paint. Marshall says that he gets a lot of questions about being with his wife 24/7, but he says it works for them. 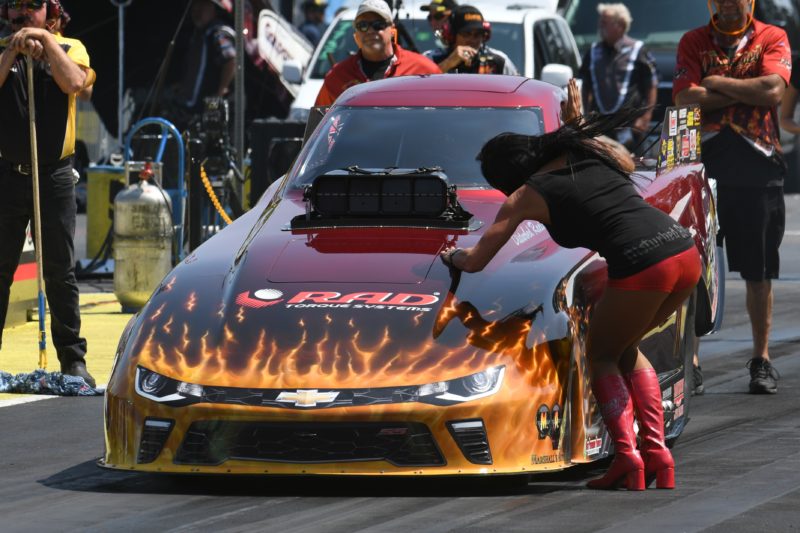 “When one of us has a bad day, we understand why. Some couples work in different places and have things go on and bring that frustration home, but we know when one of us hasn’t had a good day, and it really helps. We have a very lucky and special thing going, and she gets into it just as much as I do. If you don’t have that full support, drag racing is tough to do.”

Marshall will race rookie driver Ryan Stack in round one this weekend, scheduled for Sunday evening. After Indy, Marshall will be heading to a track he’s never raced at before: Maple Grove Raceway in Pennsylvania, for the Mopar Express Lane NHRA Nationals. He’s also got his eye on the points championship. Currently in fifth place, he’s hoping he can gain some traction on competitors and climb the ladder a bit this weekend.