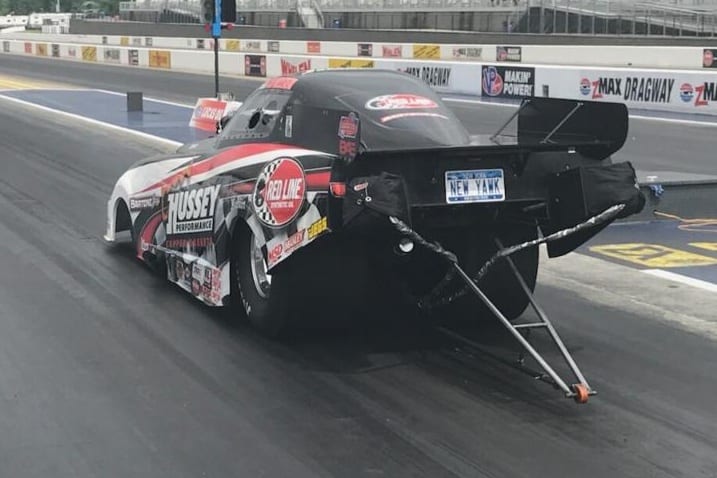 While Larry Dixon drove to three NHRA championships in a Top Fuel dragster, he’s readying to rumble in a Top Alcohol Funny Car at the 11th Annual Cavalcade of Stars presented by Budweiser, May 19-21, 2017 at Summit Motorsports Park.
The Hussey Performance-sponsored car is owned by Tony and Michael Bartone and packs a lot of punch with its blown Brad Anderson bullet.
“When I saw the car at McKinney Corp, I asked the chassis builder about it and he said it’s a really good car but that Tony, who drives it, was having back trouble and was looking for a driver because he loves the sport and wants to be involved in it,” said Dixon, who has known the Bartones for 20 years. “I gave Tony a call, and he said they were planning to run the Charlotte NHRA race in late April with Sean Bellemeur driving, and that they would stay a day later so that I could get in the car, make some laps, try to get a license and see how it goes.”
With that mission accomplished, Bartone invited definite fan-favorite Dixon to drive his car in Top Alcohol Funny Car, which features 270 mph-plus vehicles, at the 11th Annual Cavalcade of Stars presented by Budweiser at Summit Motorsports Park. The event is poised to welcome the largest audience on the annual NHRA Lucas Oil Drag Racing Series North Central Division tour.
“The Bartones could have their pick of people to drive their car, and I really appreciate that they’re letting me drive it, especially considering I have good credentials in Top Fuel, but none in Top Alcohol Funny Car,” said Dixon, with a laugh.
When asked about the difference between piloting the Top Fuel Dragster and the Top Alcohol Funny Car, Dixon was quick to mention line of sight, and likened the Top Fuel dragster experience to sitting in the front row of a movie theater and the Top Alcohol Funny Car experience to sitting in the back row behind a basketball team.
“The two cars are very different, and the learning curve is very steep,” said Dixon. “For example, I’m used to driving with a centrifugal clutch, and in this car, I’ll be driving with a pedal stop clutch, which is similar to a stick-shifted manual transmission. In my Top Fuel Dragster, I didn’t shift when the light went green, but in this car, I’ll be shifting twice. I’m very much a rookie in this car, but it will have my full attention and my respect, and I’ll be in good hands with the Bartones and their crew chief, Steve Boggs.”
Dixon, who has been as quick and fast as 3.70 at 332 mph to the 1,000-foot mark in a Top Fuel dragster and 5.59 and 263 mph to the 1,320-foot mark in the Top Alcohol Funny Car, has assuredly been successful in Top Fuel dragster competition at Summit Motorsports Park. He has won at the popular track twice, and he set a record there with that 332 mph to the 1,000-foot mark in 2015.
In addition to racing, the 11th Annual Cavalcade of Stars presented by Budweiser will boast jet engine-powered vehicles, fireworks and more. Summit Motorsports Park is at 1300 State Route 18, Norwalk, Ohio. For event and ticketing information, visit www.summitmotorsportspark.com or call 419-668-5555.
Story by Mary Lendzion