When Kyle Dvorak showed up for testing at Palm Beach International Raceway last week, he had no real intentions of driving a race car during the week-long test session. Just how did he end up in a hard-hitting Top Dragster crash in the middle of Friday night’s exhibition program? 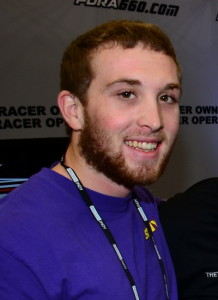 Dvorak, who finished third in PDRA Top Dragster points last year, made the trip from his Illinois home to the sunny South Florida track to help his friends, brothers Matt and Zach Sackman, who were to license in a pair of Top Dragsters; a supercharged car owned by the Sackmans and a nitrous car owned by Shane Novak.

“My mom and I headed down to Palm Beach last week for a couple different reasons, and neither of them were for me to drive a race car. That wasn’t in the plans when we headed down there. We mostly wanted to get out of the cold and do whatever I could to help the Sackman boys with their transition from the Junior Dragsters into the big cars. My mom actually urged me to bring my driving equipment with me just in case someone wanted me to make a shakedown run or whatever might come up,” Dvorak recalled.

The back story that partially led to the crash started earlier in the week, when Zach Sackman and Novak started making all-motor passes in the nitrous car. The car was skating around down-track, so Dvorak was asked to take over the driving duties when the time came to start applying nitrous. The car continued to have issues with Dvorak behind the wheel, even when adjustments were made to reduce the problems.

“First the car was pulling pretty hard to the left. Not even off the hit or at any certain point on the track, just the whole run it wanted to make a left turn. We started to fix that by staggering tire pressure in the rear by a tenth of a pound or so throughout the week. The car did some big wheelies during the week. There were a couple runs where it came up pretty high pretty fast. One of them it did a hard left turn so I had to get out of it and another one it made a hard right turn towards the center line so I had to get out of it again. Both of those times I had to set it down a lot harder than I wanted just because it made that hard turn. We had to adjust the toe-in on the front tires after those wheelies. Between the three of us in the seat – me, Shane and Zach, the car got loose on all of us down-track. So throughout the weekend we were gradually putting more wing angle in the car to help keep it planted down-track.

“I guess to sum it up, this wasn’t your average dragster that goes A to B on every pass. We were fighting issues with it all week long. I just wish that everybody who has seen the video that’s floating around could understand that there was more to it. Not that that changes what happened. I just want to shine a little light on the issues we were fighting,” Dvorak noted.

In the video shown below, the car Dvorak was driving started drifting out of the groove towards the right retaining wall, then made a hard turn across the left lane into the left wall. The impact was severe enough to cause a concussion, so Dvorak doesn’t have any memory of the run or its immediate aftermath.

“From the time I let off the transbrake button off the top bulb, I don’t remember anything up until…I remember looking up and there were a bunch of EMTs in my face and I think I remember seeing Darren (Sackman) and Antron Brown. I realized I was still on the track in the car, and that’s when I realized I messed up. But I don’t remember anything going down-track, the impact or sliding around. I honestly don’t remember any of that. I was hoping it would come to me in the next couple days. Unfortunately I’ve had a couple different concussions before, all non-racing related, and I started to gain back memory over the next few days after those incidents. I’m not really getting anything so far, but maybe in the next week,” said the 20-year old driver.

Aside from the concussion, Dvorak walked away with little more than bruises. He praised chassis builder Race Tech Race Cars and his safety equipment, including a HANS device, for preventing more serious injuries.

“My head hurt the last two days. My neck was pretty tender all day Saturday but now I have full mobility back in my neck. My left thigh is sore from where my leg hit the chassis bar but I’m actually walking around the house right now and it feels perfectly fine. I should be back to normal in a couple days. Actually the thing that hurts the most is my tongue; I must’ve bit down on it pretty hard upon impact. For how unbelievably hard I smacked into that wall, I can’t believe that’s all I have to complain about. It’s just incredible.”

As bad as it was, it’s also hard to believe that the incident was one small issue away from being a two-car collision.

“It was supposed to be another match race like they had done earlier in the day. Zach was supposed to be right there next to me. His car had a fuel leak after starting up so he didn’t run. I feel terrible enough as it is regarding the whole incident but could you imagine if I took out an innocent person with me? I wouldn’t know how I’d be able to live with myself,” Dvorak confessed.

When asked to sum up his assessment of the incident, Dvorak admitted, “As much as I wanted to find something wrong with the car, as much as I wanted to have a concrete parts failure or something to point out, there were just a lot of small factors and my poor judgment that led to it. That’s really all there is to say.”

Despite the startling crash, Dvorak says he’ll continue on with his family-owned Top Dragster before the 2015 PDRA season kicks off.