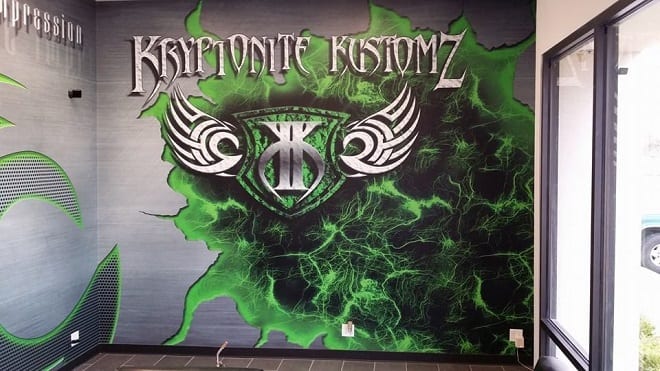 May 28-30 the Professional Drag Racers Association will visit Gateway Motorsports Park for the Mid-America Open, the fourth stop on their 2015 tour. On Thursday, Official Wrap Provider of the PDRA, Kryptonite Kustomz, will host a free pizza party for racers and crew from 7pm until the pizza runs out.

Kryptonite Kustomz is known for their head-turning wraps that cover everything from golf carts to semi rigs and race cars of all shapes and sizes, as well as banners and interior walls for corporate offices or race shops. The Oklahoma based company recently moved into a large, state-of-the-art, climate controlled facility that can house any size rig. 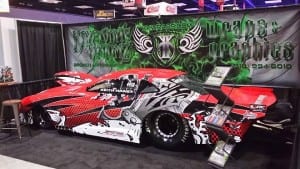 Racers can check out the jobs Kryptonite Kustomz has done for Mel Bush Motorsports, Todd Martin and Brandon Pesz of Lethal Threat Racing, Keith Haney Racing, Joey Martin and Neal Wantye, as well as Randell Reid, among others. Chris Davis, owner, invites everyone to join him at the pizza party to learn more about the complete line of services Kryptonite Kustomz offers.

Davis is also partnering with the PDRA to support their Official Charity, Shriners Hospitals for Children. A donation box will be available during the pizza party and Davis encourages everyone to consider making a donation to an organization that is very close to his heart.

“My son, Christopher, was a Shriners kid and the St. Louis Shriners Hospital is where we went,” Davis explained. “We live in Tulsa, Oklahoma, but that was the hospital that took care of his needs. The Shriners Hospital of St. Louis was special to Beth and I. We thought it would be special to encourage donations at the St. Louis race since that was our home away from home for weeks or months at a time. We want to do this in honor of Christopher.”

Christopher had a rare bone disease that slowly dissolved his spine. The Shriners worked on his medical research and also installed hardware to hold his spine together.

“They did everything they could to give him the best quality of life he could have,” Davis continued. “They would do it all for no charge. They don’t accept money. My son did pass away when he was 20 years old, but the Shriners gave us more time to spend with him and helped him have a better quality of life. Hopefully he provided them some medical knowledge that will help someone else.

“When I heard the PDRA had partnered with the Shriners and made them the Official Charity, it struck a chord with me. It rekindled some things with me and I wanted to get involved. The Shriners do so much for children without expecting anything in return. When you’re dealing with so much already and already have astronomical costs from other things, it really relieves some of the burden.”

Before his son passed away, Davis worked as an engineer, but with the void left behind after Christopher’s passing inspired him to do something different. Davis had the facility, know-how and creativity to design custom wraps and so Kryptonite Kustomz was born. Although the company is known for its incredible artwork and first class customer service, the company does more than just produce eye-catching custom wraps. Kryptonite Kustomz helps keep Christopher’s memory alive.

“Eventually the disease caused a paralysis level that made my son a quadriplegic,” Davis continued. “He was paralyzed from the neck down, exactly as Christopher Reeve was. This was how he lived the last four years of his life. There are a lot of similarities between my son and Christopher Reeve. My son’s nickname was Topher. When we read Christopher Reeve’s book we found out that his nickname to his family was Topher also. All the stem cell research indicated they had the same level of injury.

“As my son’s life was slowly being taken from him, he never complained. So people started calling him Superman. To this day if I go out to his gravesite there will be a Superman toy lying on his marker, and it’s been eight years since his passing.

“Just before he passed his favorite song that was current at the time was the Three Doors Down song, Kryptonite. Nobody has known this until now, but the name of my shop is not just a cool name. It’s named after my son. Something just told me to name it Kryptonite, and that would be a way to keep my son’s memory alive.”

To read more about Christopher’s story and learn about the full range of services Kryptonite Kustomz offers visit www.kkwraps.com and stop by Kryptonite Kustomz’s display at the Mid-America open for free pizza from 7pm until on Thursday, May 28.