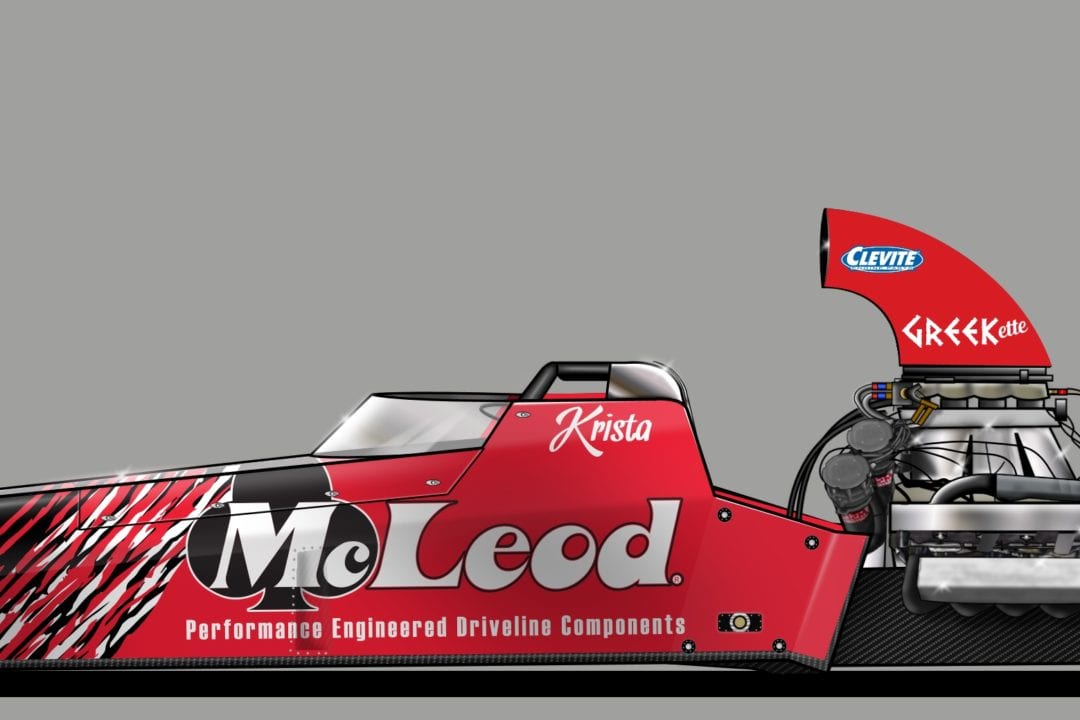 Baldwin, a third generation nitro driver, and Dicero invited Ahten and his crew out to the US Nationals earlier to help run the McLeod entry. At the race Ahten expressed interest in finishing his second A/Fuel car for the end of the season and both teams decided to collaborate and to debut a new car in Las Vegas.

Of course with the new car, it seemed perfect to debut a new edgier look for McLeod Racing.

“The car looks spectacular,” says Baldwin, Creative Director of McLeod. “I’m excited to run a new car this weekend. I’ve driven a few different dragsters over the years and each one has a personality of its own. Each car moves different off the line and down track, it just takes a couple runs to learn how to finesse this 4,000 HP machine. But with the confidence I have with the Ahten team and Anthony Dicero, there should be no problem getting this car down the track.”

With the SEMA show following the race this weekend, Paul Lee, president of McLeod, wanted to showcase the company with the new look.

“The SEMA show is our biggest show of the year,” says Paul Lee. “With many attendees going to the race, it’s a great way to expose the brand to our potential customers and industry collegues. And to have JEGS being our Dealer of the Race, customers at home can buy everything McLeod with a 20% discount this week.”

Baldwin returns to Las Vegas where she went on to the second round in 2017 and ran consistent numbers all weekend.

“Last year at Vegas was one of my favorite races,” says the 25-year-old. “We ran consistent 5.30’s and I made my way to the second round. This time of the year is one of the busiest for myself with racing and the SEMA show, but to be able to stay on my game and drive with focus, that is a challenge in itself. I love what I do and there is no doubt about that.”

From October 26 to November 2, customers will be able to receive a 20% discount on the entire McLeod Racing line through JEGS High Performance.