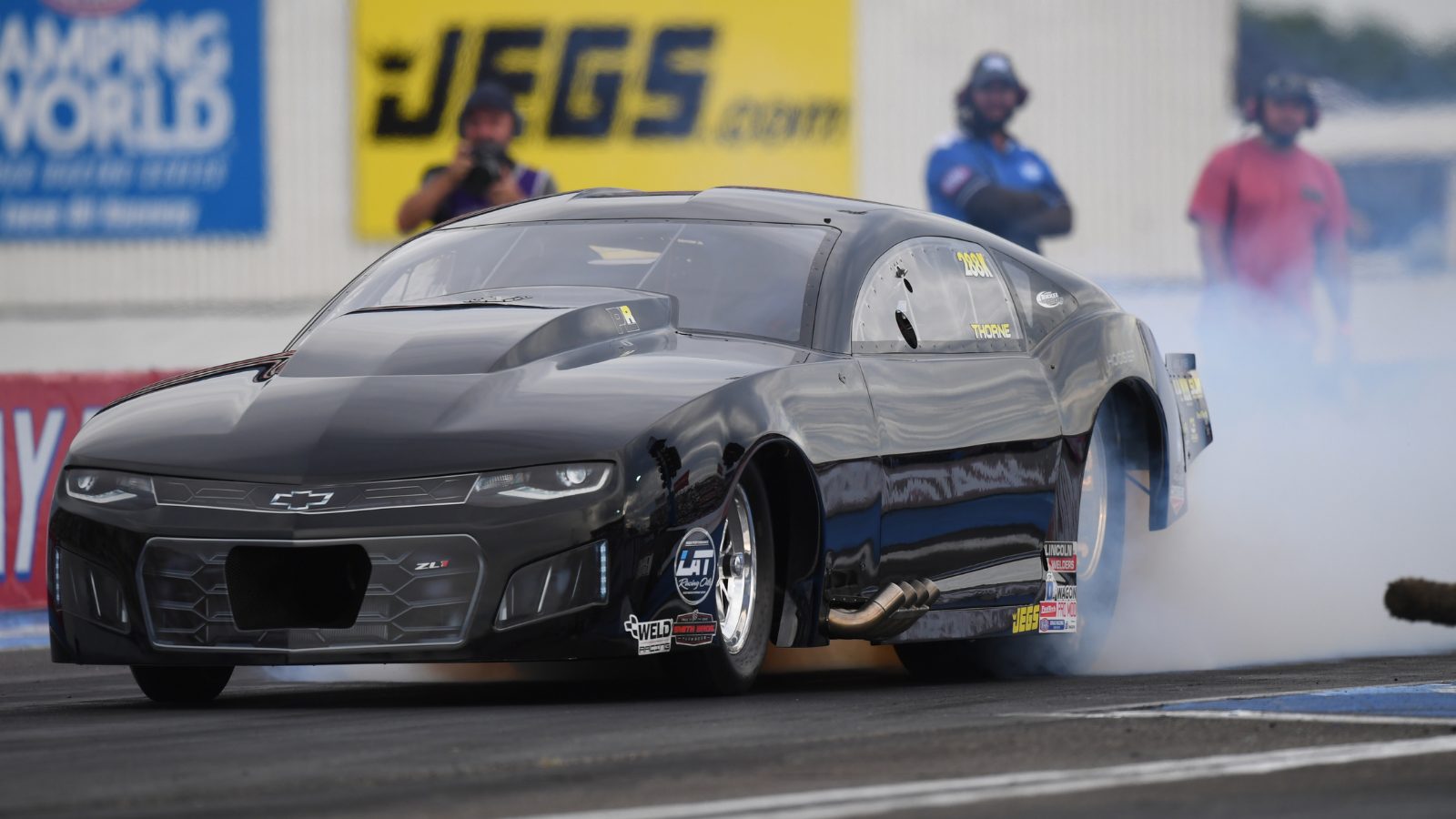 Kris Thorne may be on the verge of clinching his first world championship in the FuelTech NHRA Pro Mod Drag Racing Series presented by D-Wagon, but he’s not about to celebrate just yet.

Thorne currently has a 102-point lead over two-time world champ Stevie “Fast” Jackson heading into the final event of the 2022 season as part of this weekend’s 37th annual Texas NHRA FallNationals at Texas Motorplex. It’s a significant lead for Thorne, who has three wins this season, but it hasn’t guaranteed him the title just yet.

Thorne is well aware of that, which is why he’s focused on trying to have another big weekend to close out what has been an incredible season in his ProCharger-powered Camaro.

“We’re just going to continue to take it round by round and if it’s our day, it’s our day,” Thorne said. “Every race we go to, we have that same approach and take it a round at a time. If you catch yourself planning ahead, that’s when you get in trouble and hurt yourself. Every race this year, we’ve taken it round by round and it’s worked out for us and hopefully, we can do the same thing this weekend.”

This weekend’s race in Dallas, which is the last of 10 events during the 2022 season in the FuelTech NHRA Pro Mod Drag Racing Series presented by D-Wagon, is also powered by JBS Equipment, which is owned by Pro Mod standout Justin Bond. His season has included a victory in Topeka, and he was thrilled to have his company sponsor the final race of what has been a terrific year in NHRA Pro Mod.

“The NHRA is one of the largest motorsports sanctioning bodies in the world,” Bond said. “To have the opportunity to have the JBS Equipment company branding involved, supporting and to be supported by my Pro Mod class was an easy decision, it was also a business decision. JBS Equipment has over 100 dealers in the United States and adding more each year. This opportunity provided allows JBS Equipment to have further reach and engagement with potential future customers and dealers in a location where we are looking to expand our dealer network.”

Bond’s Bahrain 1 Racing teammate Jackson knows he need a monumental weekend – and likely his second win of the season – plus an early exit by Thorne to get his third title. But the fan-favorite driver is excited for the opportunity, especially considering his struggles early in the year. Those appear to be gone and Jackson, who won in Charlotte last month, is again back in title contention.

“It’s always bittersweet going into the last race of the year. You want to try to win it all, but you don’t want it to be over,” Jackson said. “I love NHRA drag racing and the guys I compete against out here are the best in our sport. Big moments like this require preparation and focus. We have our best motor in the car, our best blower and I’m laser-focused. You try not to think about it and say it’s just another race, but that’s a lie. This race crowns the world champion of door car racing and it’s a huge moment. It’s a long shot for us, but I’m going to try to knock it out of the park.”

Since the title isn’t official yet, Thorne isn’t even considering any early celebrating. His final-round berth in Indianapolis strengthened his points lead, but two first-round losses in the past four races has left an opening – albeit a small one – in the championship race.

Thorne will have to deal with a number of talented drivers in Dallas as well, including defending event winner Lyle Barnett, who also won in Indy this year, Jackson, Bond, defending world champ Jose Gonzalez, Doug Winters, and J.R. Gray. It all makes for a massive weekend, but Thorne knows if his team can continue to make consistent runs, good things will happen, and that means possibly his first world championship in the class.

“At the beginning of the year, we were really consistent and just kept going rounds,” Thorne said. “To possibly clinch a championship and win the race, that would definitely be a lifetime goal. We’ve got to have a consistent race car this weekend. That’s going to be the key, going A to B every lap.”

To purchase tickets to the Texas NHRA FallNationals at Texas Motorplex, call 800-668-6775 or visit tickets.texasmotorplex.com. For more information about NHRA, visit www.nhra.com.