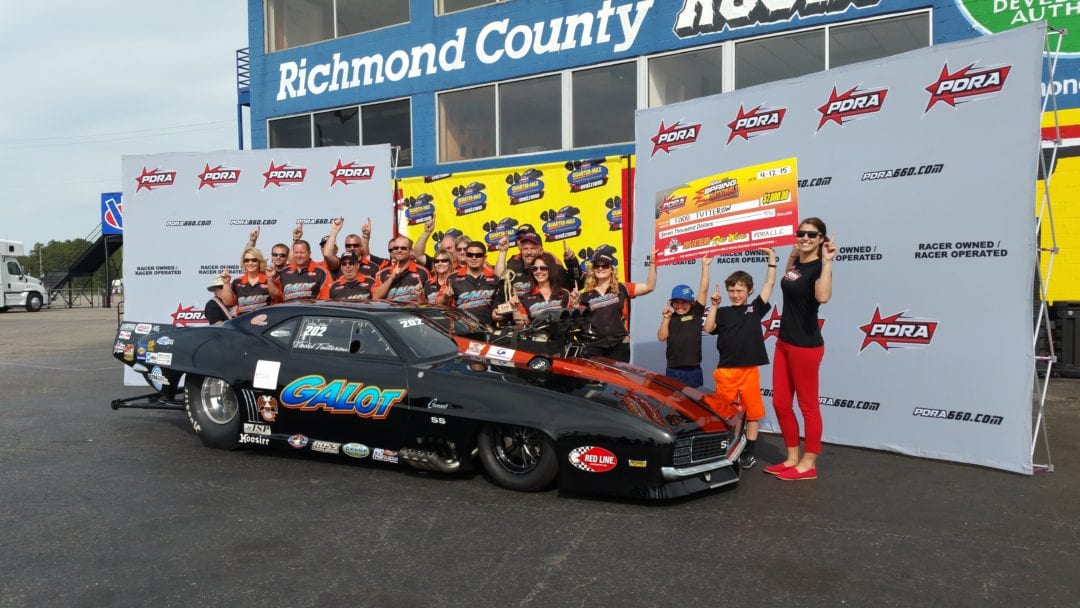 Todd “King Tut” Tutterow, from Yadkinville, NC returned to the PDRA NAS Racing Pro Extreme class for the 2015 season with his Galot Motorsports ’69 Camaro after a two-year absence from the Pro Extreme class but has proven to still be a big contender just after the first two events. Tutterow lost in the semifinals at the season opener in Ennis, TX but was crowned the Champion at the Spring Nationals at Rockingham, NC.

Tutterow, along with Jeff Bohr, had their hands full at the PDRA Spring Nationals, not only tuning Tutterow’s Galot Motorsports ’69 Camaro in Pro Extreme but also the Galot Motorsports’ two Pro Boost cars driven by John Strickland and Kevin Rivenbark. Rivenbark qualified second with Strickland landing in the number seven position The two Galot teammates met in the second round of Pro Boost where Strickland took the win with a starting line advantage over Rivenbark. Strickland also had a good side by side race against Fiscus in the semifinals – Strickland’s .065 reaction time to Fiscus’ .062, Strickland’s 3.858 et to Fiscus’ 3.856 et. Strickland lead until about the 330-foot mark, when Fiscus drove around him for the win. The MOV was .00057 seconds (approximately 19 inches).

After the Pro Extreme qualifying was complete, Tutterow found himself sitting in the number twelve position with an et of 3.63 and would face Wesley Jones, who ran a 3.58 et to qualify fifth. First round, Jones had his hands full with his ’41 Willys trying to keep it on his side of the track while Tutterow went right down broadway with a 3.66 et to take the win.

In round two, Tutterow was facing his longtime friend Terry Leggett. Leggett had to shut down early giving Tutterow the win with his 3.71 et. In the semifinals, Tutterow defeated Jose Gonzalez when he ran into traction problems.

Tutterow was to take on Mustafa Buhumaid. This would be their second time meeting during the 2015 season with Buhumaid 1-0 against Tutterow, but that quickly changed when Buhumaid had an early starting at the tree (-.084) giving Tutterow the win.

“When it is your day, it is your day.” Tutterow said of the win. “I want to thank my crew, Mr and Mrs Wells (Galot team owners) for all of their help and support. We couldn’t do any of this without them. I also want to dedicate this race to my mom’s memory; her birthday would have been this weekend.”