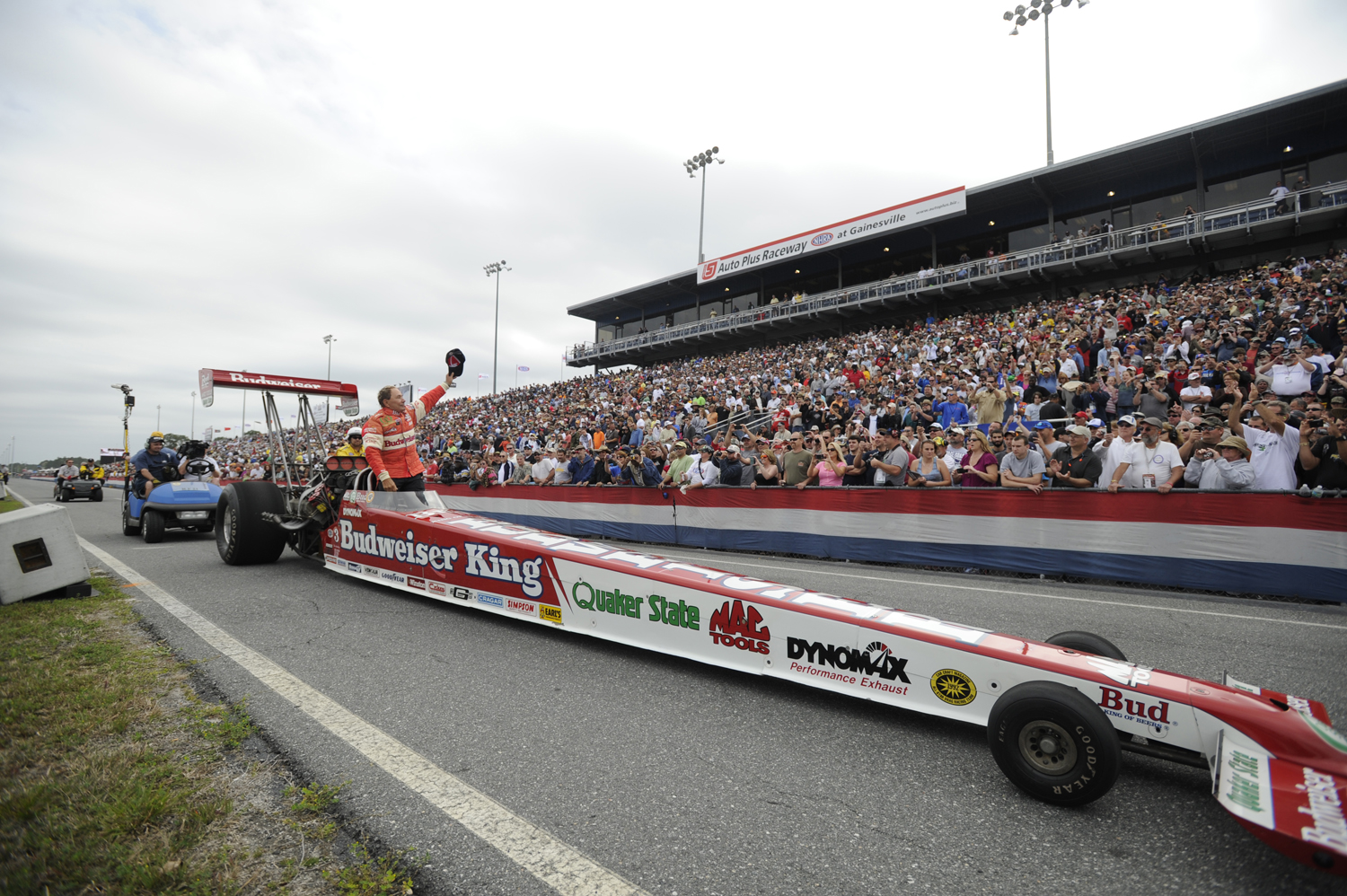 The ‘King of Speed’ Kenny Bernstein has done a lot during his decades of involvement with the NHRA, but his most notable accomplishment is the day he earned his nickname by breaking the 300 mph barrier in Top Fuel, 20 years ago.

The ‘King’ will be honored at this weekend’s Tire Kingdom NHRA Gatornationals presented by NAPAFilters.com at Auto-Plus Raceway at Gainesville, the same event where that historic pass took place two decades ago. Del Worsham (Top Fuel), Mike Neff (Funny Car), Jason Line (Pro Stock) and Eddie Krawiec (Pro Stock Motorcycle) are the 2011 winners of the NHRA Full Throttle Drag Racing Series event that will be telecast on ESPN2 HD.

Not only was Bernstein a six-time NHRA world champion, record-breaking driver and team owner in the NHRA, he was also a successful team owner in both NASCAR and IndyCar. Even with all of his involvement and achievements in other forms of racing, the NHRA will always be his favorite.

“The NHRA drag racing side, the 300-mile-per-hour feat, the things we got to accomplish in drag racing will be forefront always,” Bernstein said. “It’s always really the NHRA drag racing side because I got to be the driver there. That’s the one thing that I have always enjoyed the most of any of these racing endeavors. An owner is fine, but there’s nothing like driving, winning and competing, being at the top of your game on a certain day.”

He earned the title ‘King of Speed’ during qualifying at Gainesville in 1992 with the original Budweiser Top Fuel dragster. The 301.70 mph run surprised him and his team as much as it stunned the entire crowd at the East Coast opener.

“It was pretty much ideal conditions,” Bernstein said. “We hadn’t even said that this was a 300-mile-an-hour run. We didn’t talk much about getting to 300 other than we wanted to, it wasn’t like it was preplanned this was going to be the one.”

The NHRA will honor the 20th anniversary of that great moment Saturday, March 10th at Auto-Plus Raceway at Gainesville with a special ceremony that will include the original Budweiser dragster, Bernstein, his wife Sheryl and some of the original members of his crew followed by an autograph session at the Darrell Gwynn Foundation display.

Bernstein retired from the NHRA at the end of 2011, but his son Brandon still competes in the 7,000-horsepower Top Fuel class and for the first time in his nine-year career he’s not racing for his father’s team. Brandon joined Morgan Lucas Racing as the driver of the MAV TV/Lucas Oil dragster and currently sits ninth in the point standings.