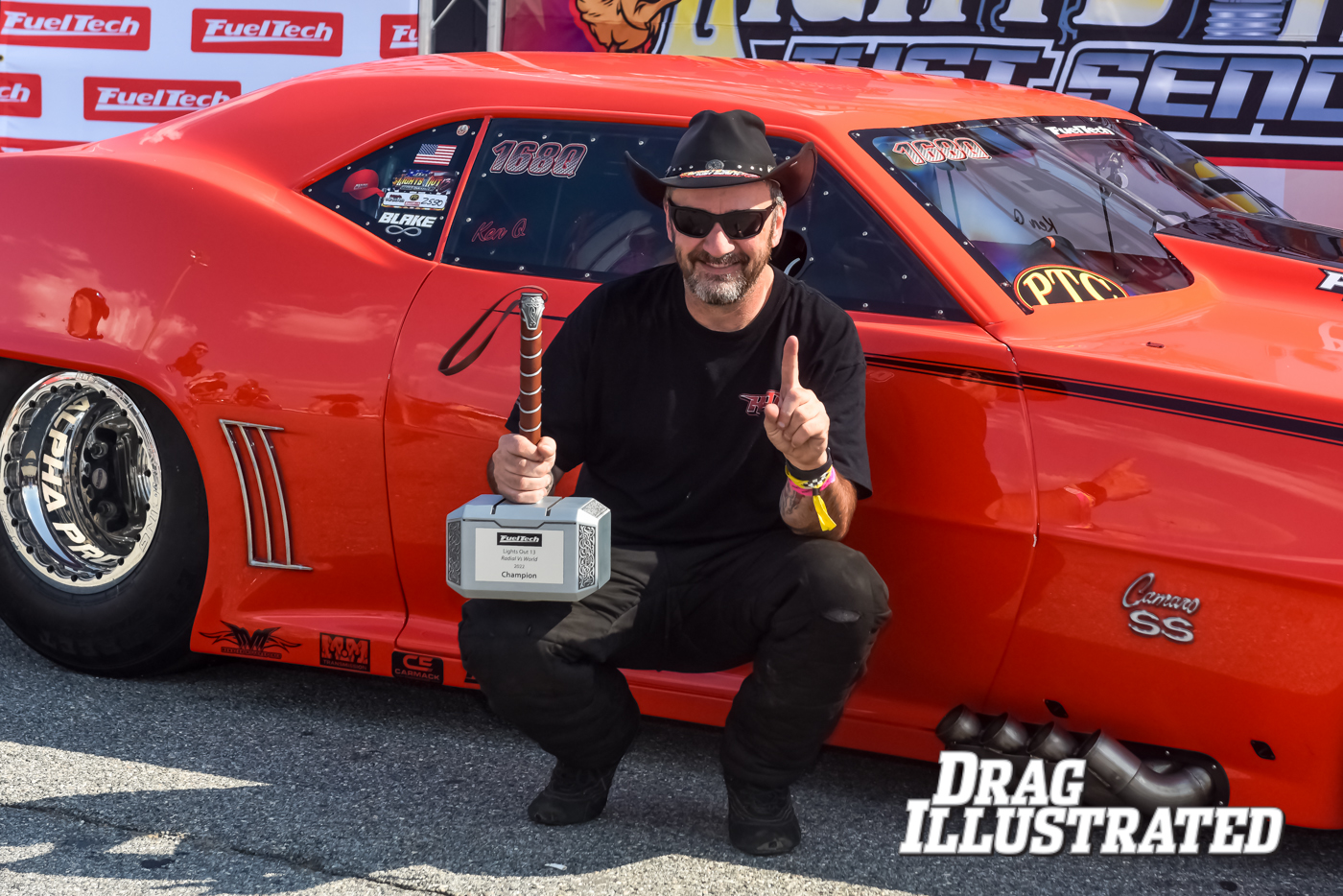 After several years of chasing a win at Duck X Productions’ “Super Bowl of small-tire racing,” Ken Quartuccio finally has a Lights Out hammer to add to his trophy case. The Connecticut doorslammer racing veteran scored the win in Radial vs. the World at Holley EFI Lights Out 13 on Sunday evening in his ProCharger-boosted “Serial Killer” ’69 Camaro. It was a side-by-side race with Bryan Markiewicz in the final round, with Quartuccio using a holeshot advantage and a 3.764 at 200.35 to finish ahead of Markiwicz and his 3.773 at 198.76.

The win means so much to Quartuccio not only because he’s been chasing it for so long, but also because of the challenging nature of the event. Lights Out brings out the biggest hitters in radial racing, and the conditions can test even the most experienced drivers and tuners.

“It’s an incredible feeling to win this race,” said Quartuccio, who was named the 2021 DI Outlaw Racer of the Year. “I tell this to people and they don’t ever understand it. They have to figure it out themselves to get it. There’s two things about Duck’s race that just makes it hard. The five rounds of racing mean you have to be really good five times, which is hard. The other thing is you qualify and you do everything at night, but then on race day the conditions deteriorate really fast.”

Quartuccio and his team, led by longtime friend and tuner Jamie Miller, skipped testing before the race and went into the weekend with a car that hadn’t been on radials since Quartuccio was runner-up in RvW at No Mercy 12 in October.

“I almost think you’re at a disadvantage to test,” Quartuccio said. “This year is the first year I didn’t test at all. I showed up on Thursday. I didn’t come on Wednesday and I didn’t test once. We put the radial setup in it from when we runnered up a few months back and started out with that.”

“We didn’t worry about fast numbers,” Quartuccio said. “I didn’t pay attention to Jason and Markiewicz and everyone’s crazy numbers. I just stayed focused on what we were doing.”

That set up a semifinal pairing with No. 1 qualifier Jason Lee, who recorded the second-quickest pass in RvW history with his 3.499 on a second-round single. Facing Lee had admittedly scared Quartuccio earlier in the weekend, but by the time eliminations continued in the heat of the day on Sunday, Quartuccio had turned his focus to the threat developing on the other side of the ladder.

“We were afraid to race Jason,” Quartuccio said. “But then I watched how good Markiewicz and [tuner] Josh Ledford were doing in the heat. Nobody was going to run with them in the heat. There was no way. I said if I had to race Jason in the semis, I’d rather race him than Markiewicz. My team was looking at me funny, but it made sense if you looked at how the runs went all day.” 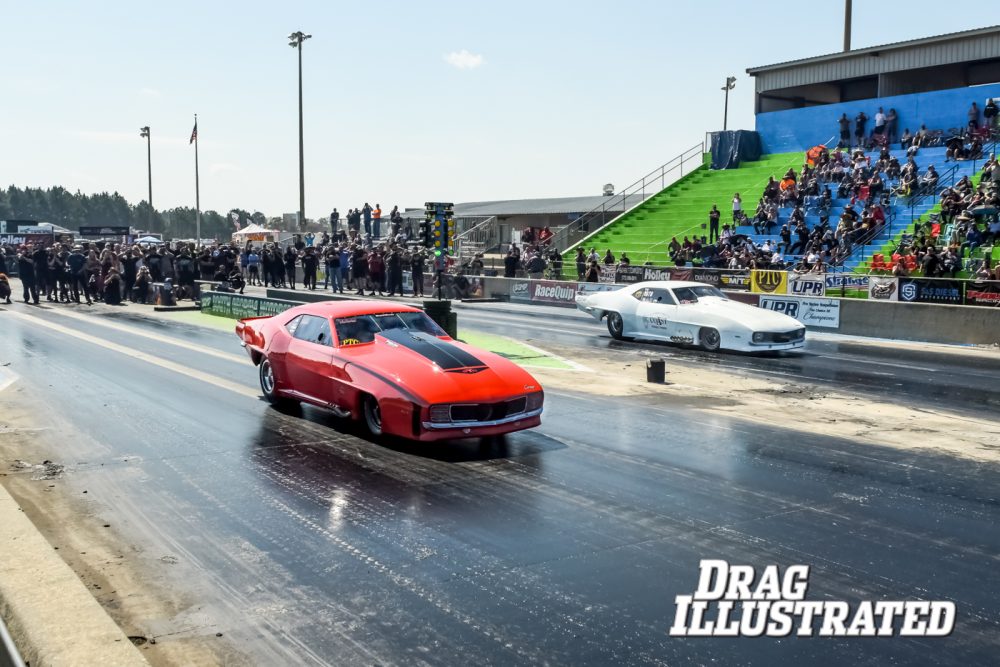 Knowing he would probably be at a performance disadvantage in the final round, Quartuccio planned to make up for it with a superior reaction time. He succeeded, cutting a .055 light to Markiewicz’s .143 bulb. Both drivers had to pedal, but Quartuccio recovered quicker and went on to win.

“We set the car up super soft,” Quartuccio said. “As soon as I let go of the button it tried to wheelie and I just gave it a quick, quick blip to set the nose down, whereas his car carried the nose harder and he had to lift longer than I think I did. I think that was the difference to win the race. I thought it was all going to be him. They just ran so good in the day.”

The win was especially validating for Quartuccio, who started racing at Lights Out several years ago in the Outlaw 632 class, which no longer competes at the event. He’d qualify No. 1 just about every time, but only came away with one win. The frustration continued when Quartuccio stepped up to Radial vs. the World a few years ago.

“I always ran good there and I always came home without a win,” said Quartuccio, who did win the Magic 8 race in Pro 275 at No Mercy 12 last year. “I’d be at the end of the track and I’d want to just keep driving right off the end of the track sometimes. Look at Jason Lee and what they went through. They’re fast. Fletcher Cox [and Shawn Ayers], they tested in Florida and they were fast. It’s heartbreaking. This race, I don’t know what it is about it, but it’ll break your heart.”

Those heartbreaking moments were also tough on Quartuccio’s team, which includes Jamie and Johnny Miller, Dennis Godbout, Gary Gonzalez, Richard Beaumont, Jason Gade, and Kyle Cheval, as well as Quartuccio’s wife, Denise, and daughters Kaitlin and Kelsey. Quartuccio was proud to deliver a win for them, and was quick to praise them. 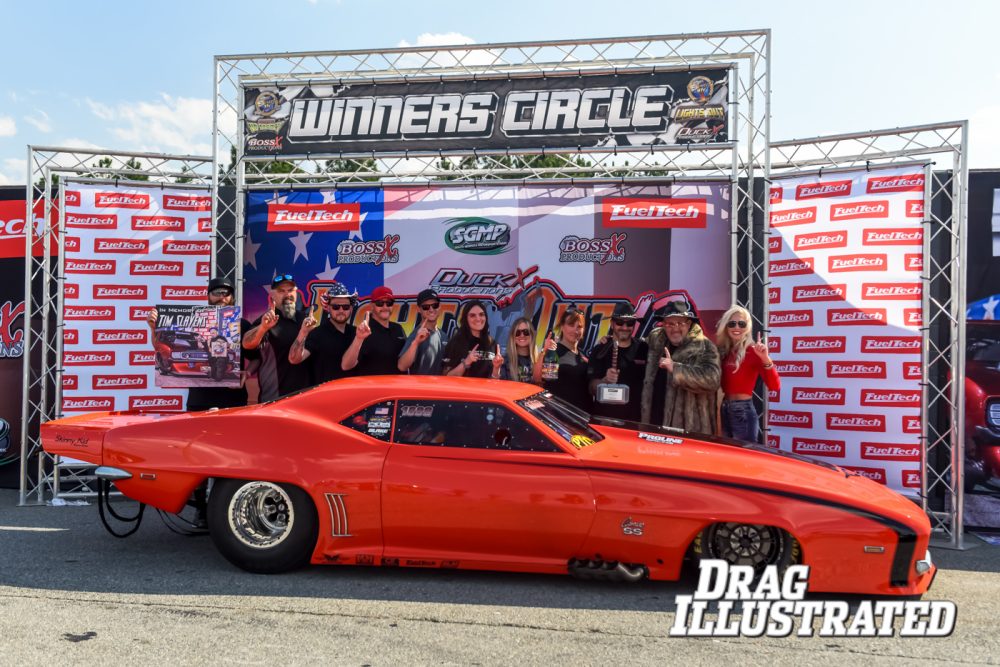 “Jamie and those guys made a lot of really good calls and a lot of gutsy calls,” said Quartuccio, who also mentioned supporters like Menscer Motorsports, Proline Racing, and M&M Transmission. “I give them credit for really thinking outside the box.”

When Quartuccio appeared in DI #174 as the 2021 DI Outlaw Racer of the Year, he hinted that he was trying to get a major Duck X Productions RvW win so he could step away from radial racing. After winning Lights Out 13, he confirmed he’ll likely focus on big-tire competition to pursue the 2022 PDRA Pro Boost world championship.

“If you ask me today, I’m not going to Sweet 16 and I’m not going to chase the [Radial Outlaws Racing Series] championship,” said Quartuccio, who will still attend radial races with his daughter, Kaitlin, who’s racing in Ultra Street this year. “I want to try to win a Pro Mod championship. I don’t know how many more years of racing I have left at the level I’m racing at or as much as I’m racing. Pro Mod is really where I want to focus my efforts. I don’t know, in three weeks you’ll probably see me at Sweet 16. I don’t know. But I just believe Pro Mod racing is the best thing going right now. I just think it’s the best.”