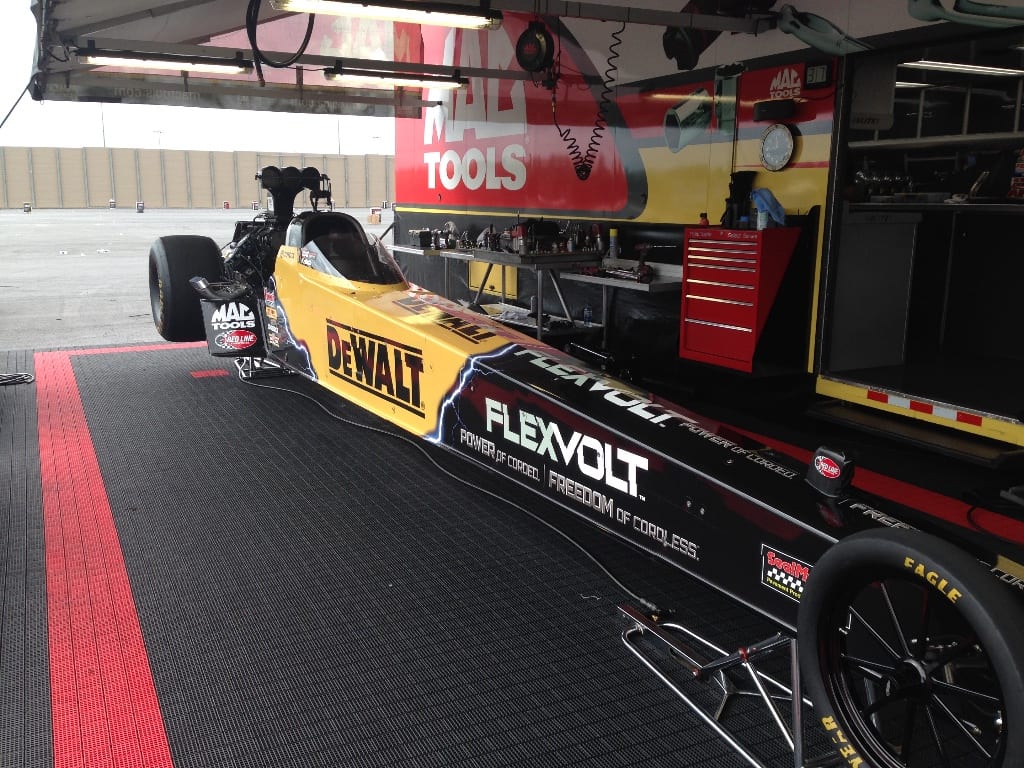 For the second consecutive season, NHRA Countdown for the Championship contender Doug Kalitta will showcase the colors of DEWALT. The black and yellow scheme will be campaigned for the next two events: the AAA Midwest Nationals in St. Louis and the NHRA Keystone Nationals in Reading, Penn.

Stanley Black & Decker, the parent company of both Kalitta’s traditional primary sponsor, Mac Tools, and DEWALT, will use the space to promote their new line of DEWALT FLEXVOLT™ products. The DEWALT FLEXVOLT™ line, which includes new battery technology, was launched earlier this season to much acclaim.

“I am excited to showcase DEWALT’s new FLEXVOLT™ line on my Top Fuel dragster,” said Kalitta, who has clinched his nineteenth consecutive top 10 points finish. “The technology has proven to be a breakthrough for every jobsite and we are proud to utilize both Mac Tools and DEWALT products in our pit area on these 11,000 horsepower machines.”

DEWALT will utilize the primary placement to educate both consumers and sales representatives on the advantages of the FLEXVOLT™ System, in which a proprietary battery technology platform provides users with multiple voltage outputs from a single DEWALT battery pack – 20V MAX*, 60V MAX*, and 120V MAX* when two 60V MAX* batteries are combined – giving users the power of corded with the freedom of cordless.

The 2016 season has already been memorable for Kalitta as he scored three consecutive victories earlier this season for the first time of his career. Just days ago, Kalitta recorded a strong performance in the 2016 Countdown for the Championship debut race in Charlotte. He recorded his fourth no.1 qualifier of the season and his fifth final round appearance. Kalitta currently ranks second in the standings.

“Kalitta Motorsports is pleased to highlight this new line of FLEXVOLT™ products on our 330-mph dragster,” said Jim Oberhofer, Vice President of Operations, Kalitta Motorsports. “Team Kalitta puts our tools through strenuous tests with the engine rebuilds and their reliability is incredible.”