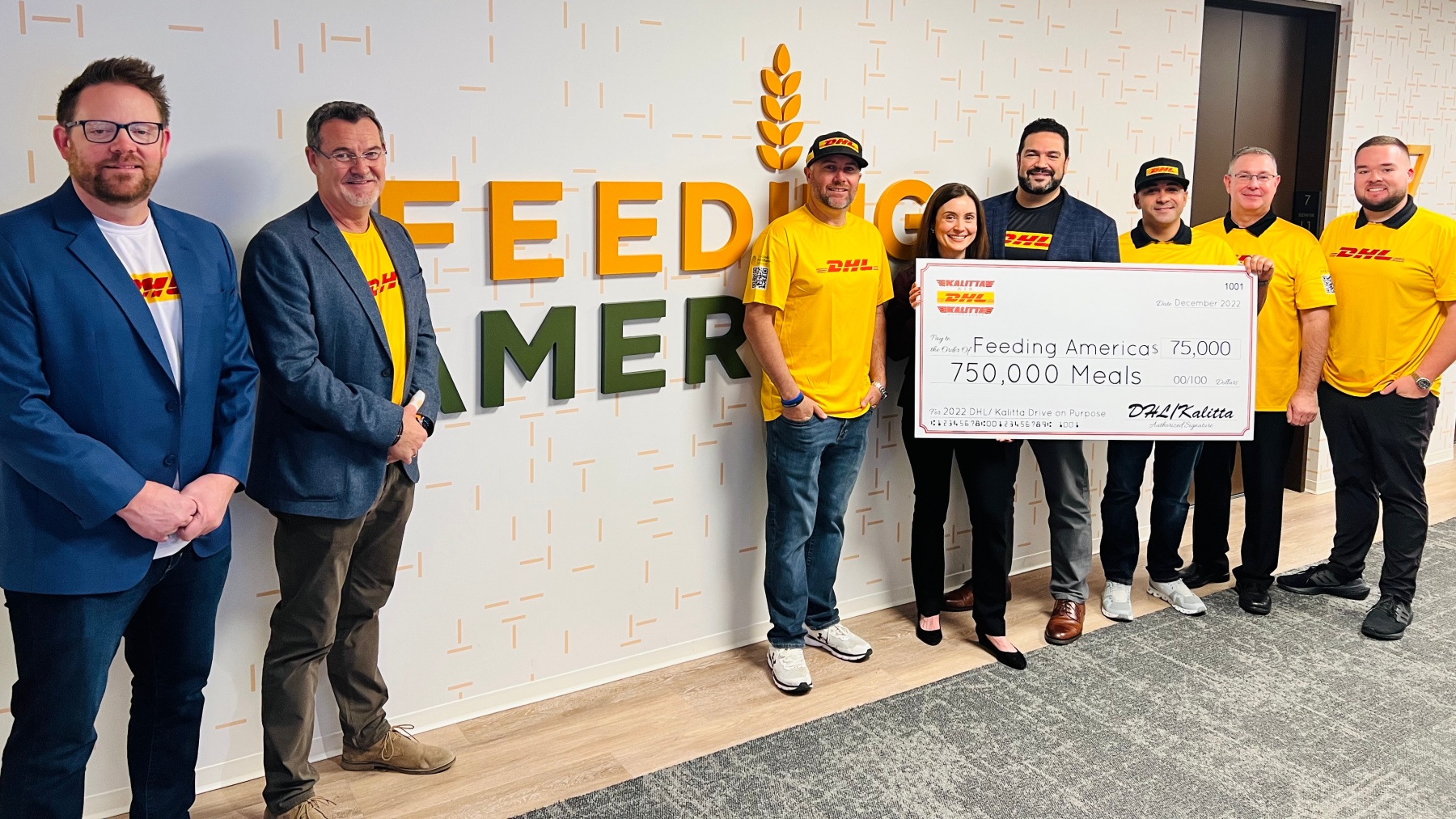 During four races of the NHRA Countdown in the months of September and October, Kalitta Motorsports along with long-time sponsor DHL donated 750,000 meals to Feeding America,  the largest charity working to end hunger in the United States, to help race to end food insecurity with the ‘Drive For Purpose Challenge.’

The ‘Drive for Purpose’ charitable program, which exceeded its original goal of 500,000 meals, was based on win lights recorded by Doug Kalitta, Shawn Langdon and J.R. Todd at the Carolina Nationals in Charlotte, the Midwest Nationals in St. Louis, the Texas Fall Nationals in Dallas and finally, the Nevada Nationals in Las Vegas — along with fan and corporate donations. A check presentation was conducted Tuesday, December 6, at the Feeding America Chicago office with Langdon, Todd, Bob Lawson and Luke Fath from Kalitta Motorsports, as well as DHL Executives Geoff Walsh, VP and GM of the Midwest U.S. Area and Nemer Abohasen, VP and GM of the Southeast U.S. Area.

“We are thrilled we received support from our NHRA fans, some of our sponsors and most of all the success on the track by Doug, Shawn and J.R. to support Feeding America and the Drive For Purpose Challenge,” said Chad Head, Kalitta Motorsports General Manager. “We were in the middle of our playoffs racing for the Top Fuel and Funny Car world championships, so drawing more attention to Feeding America by winning rounds on Sunday was awesome all the way around. DHL is a great marketing partner that not only has a great B2B relationship with our organization, but they do an amazing job supporting causes that are important to us and our fans.”

For every win light the drivers turned on during eliminations on Sunday, Kalitta Motorsports donated 2,000 meals to Feeding America and DHL matched that donation. At the final race of the program, both companies doubled the donation amount to 4,000 meals each per win light. During the Drive For Purpose, fans were also able to get involved by scanning a QR code on the back of each of the Kalitta Motorsports team haulers to make a direct donation to Feeding America. Additionally, the NHRA promoted the initiative on their social media accounts and numerous times during the NHRA on Fox national television broadcasts. Each of the drivers and Kalitta Motorsports social media accounts gave updates throughout the four-race stretch to keep the program top of mind.

“It’s been great to be able to work together with a long-time partner in Kalitta on ‘Purpose’,” said Abohasen, who heads all the Social Responsibility efforts for DHL Express in the U.S. “Our purpose is to take a bite out of Hunger!  We started something amazing to bring awareness to the issue and partner with Feeding America in this great cause.  We hope this will be the beginning of even more exciting things to come between DHL/Kalitta, on ‘Purpose’!”

The Drive For Purpose Challenge was part of a much broader program by DHL during the month of September that saw the company also raise funds for Feeding America that equated to a donation that was large enough to feed 2.6M people.