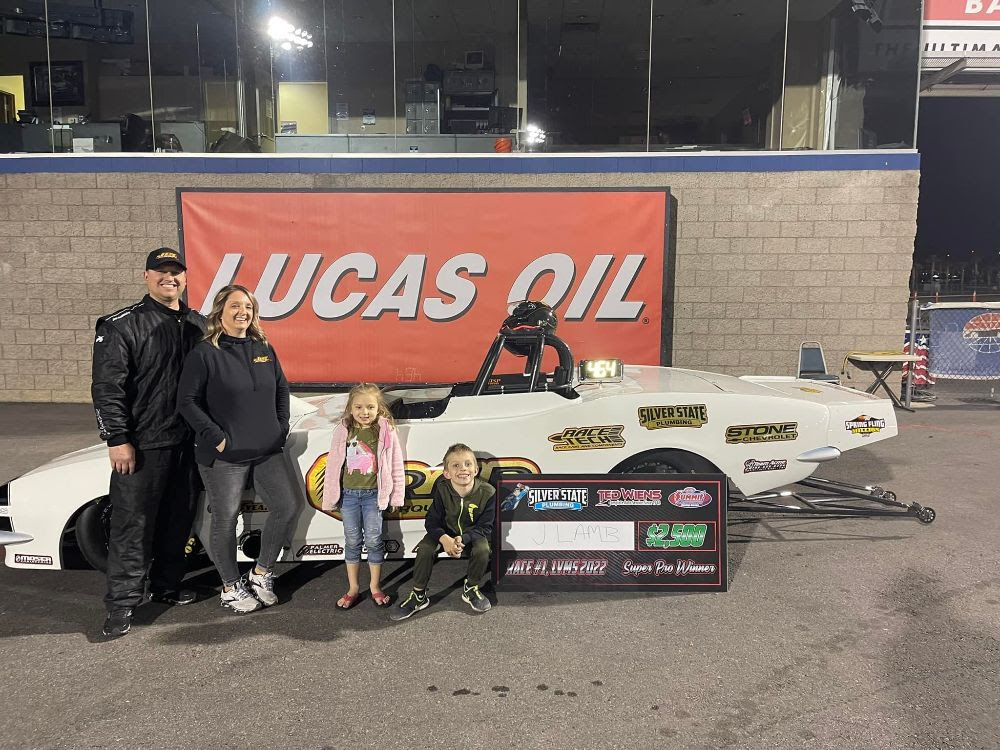 A lot of folks in the drag racing community still think of Justin Lamb as one of the young guns, a heavy-hitter who’s part of the “next generation” of NHRA’s Lucas Oil Drag Racing Series. The calendar, though, tells a different story: Lamb is definitely a heavy-hitter – he’s a five-time champion in the premier Sportsman series and an avid bracket racer – but now he’s in his mid-30s, and his role has expanded to include being dad to the next generation as son Jayce finds his groove in a Jr. dragster.

In no way does that mean that dad is hanging up his driving gloves to be crew chief. Lamb’s outlook on the 2022 season of drag racing is one that is perhaps more family oriented than in the past. Jayce, now 8 years old, and little sister Jovi have often accompanied dad Justin and mom Jeanine to the racetrack, but Jr. racing wasn’t a tremendous focus. Recent developments, though, have impacted the family’s outlook.

“Jayce has had a Jr. dragster since he was 5, but over the winter when we were testing, he found confidence that he’s never had before,” said proud father Lamb. “He was actually having fun, and he was having so much fun that he wanted to make more runs. He told Jeanine, ‘I want to stage myself.’ That was a first, and we were both excited to see him so enthusiastic about his own racing.”

In 2022, the elder Lamb’s program will include a full season in the two well-recognized Chevrolet COPO Camaro entries that he raced successfully last year. In Stock, he’ll be back behind the wheel of the RAD Torque Systems COPO, and in Super Stock, Lamb will once again wheel Larry and Carol Stone’s Silver State Refrigeration and HVAC/StoneChevy.com COPO.

He will also be bracket racing the new Chevrolet Camaro roadster that he fine-tuned over the winter and that recently brought in a $2,500 payday in Super Pro at the first race of the year at The Strip at Las Vegas Motor Speedway. The roadster will be the car that brings the family together to compete for dual trophies at specific events.

“I’m looking forward to racing with Jayce,” said Lamb. “I’m excited to get to a few of the local ones that I haven’t done in over a decade, race Juniors with Jayce in the morning and my car in the afternoon. This is something we haven’t really been able to do before. It’ll be cool to spend a weekend here and there racing in a new way.”

On the NHRA side of things, things will be a bit more intense. Lamb’s schedule will likely include a full go at the Pacific Division races, which is something he hasn’t focused on for a couple of seasons.

“The schedule worked out really well for us this year, and with how convenient it is, it makes it pretty enticing to go for a full division count,” he said. “There are seven races withing five hours of our house, and if we can do well, that could open up the opportunity to race for points.

“We were moderately happy with how things went last year with both cars, but we worked really hard over the off season, and I’m looking forward to seeing that translate into better results.”