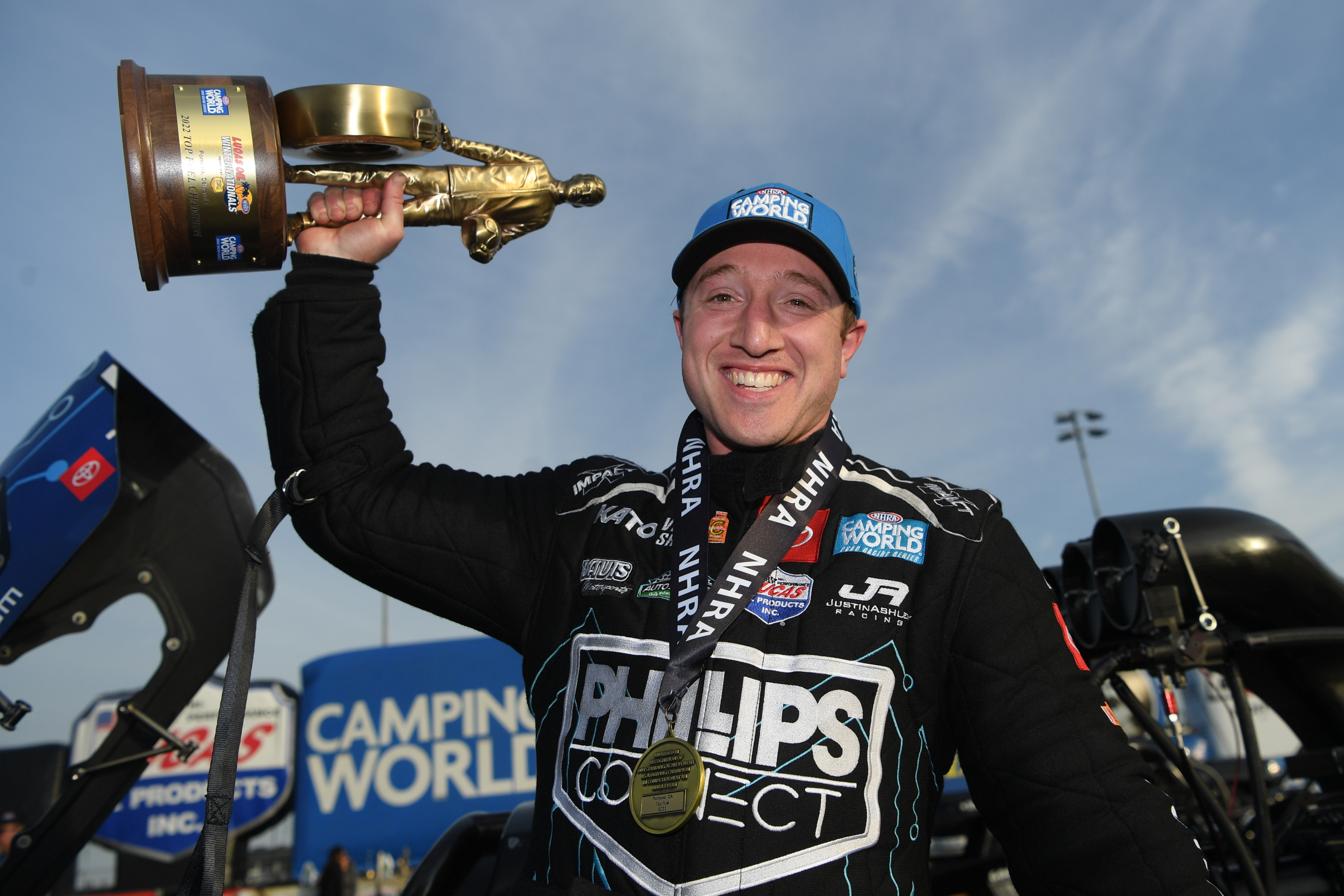 For the second consecutive NHRA Winternationals Justin Ashley raced his way to the final round and today the young driver from Plainview, New York, drove all the way to the winner’s circle. His Phillips Connect Toyota Top Fuel dragster powered by Vita C Shot turned on four wins lights on the way to victory at the 62nd annual NHRA Lucas Oil Winternationals. In the first round Ashley defeated Jim Maroney, then took on Toyota Gazoo Racing North America teammates Antron Brown and Steve Torrence in consecutive rounds before outrunning 2019 Rookie of the Year Austin Prock in the final.

“We wanted to focus on our sixty-foot times and our early numbers. Our numbers in Phoenix were really good and it was up to us to make sure it translated to Pomona and the rest of the year,” said Ashley. “We are off to a good start. Those runs from testing were integral to our success today and this dragster was really like a bracket car all day. From a driver’s perspective when you have good early numbers and make runs like we did today that gives me as a driver a lot of confidence.”

“The better the car is running, of course you feel more pressure to perform as the driver. For me I always put pressure on myself to perform for my team. Our Davis Motorsports team and (crew chief) Mike Green do such an outstanding job. It is up to me to be the best driver I can be.”

Over the course of the three-day event Ashley’s Phillips Connect Toyota Top Fuel dragster was a model of performance consistency posting seven consecutive flawless passes down the newly resurfaced Auto Club Raceway at Pomona. On race day his winning elapsed times were 3.699, 3.692, 3.702 and 3.694 seconds, respectively. With the backing of new primary sponsor Phillips Connect and Vita C Shot along with returning sponsors Auto Shocker, KATO Fastening Systems and GuardLab Ashley is poised to be a dominant player on the NHRA scene in 2022.

“We knew coming into today and this season that Top Fuel was going to be tough,” said Ashley from the Auto Club Raceway media center. “You saw that starting today when races were separated by a few thousandths of a second. We really had no lay-ups, and I don’t think you will have any lay-ups this season. To be able to beat guys like Maroney, Brown, Torrence, the four-time champion and Prock just solidified what we wanted to get done over the off-season. We were trying to work on picking up more power. Today you could see the progress we made.” 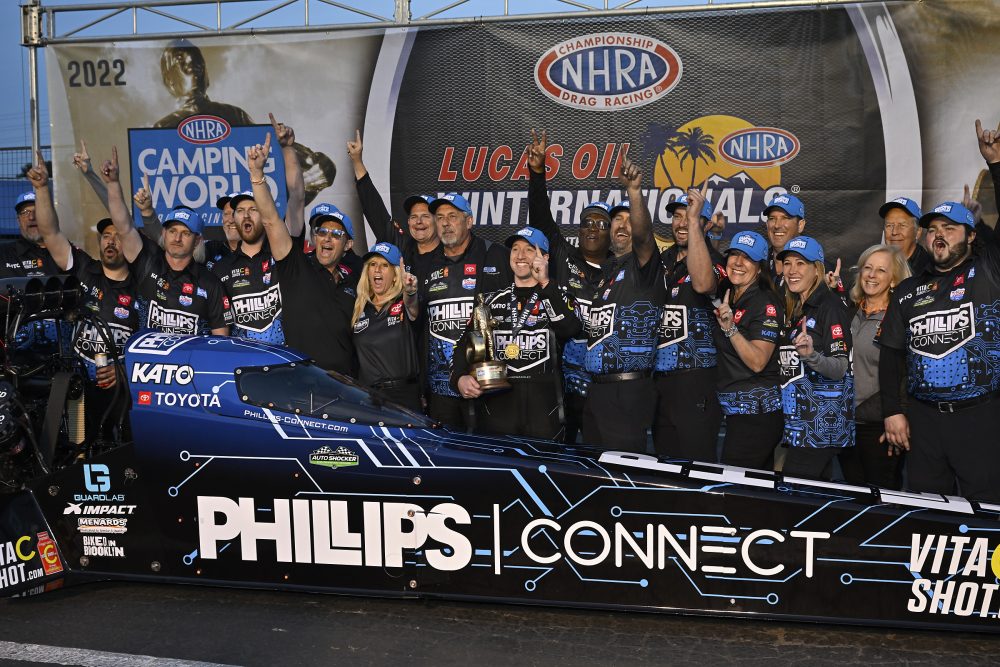 In the first round Ashley got his day off to a strong start with a resounding victory over Maroney. This was the first time Ashley and Maroney have squared off in eliminations. The Direct Connect Top Fuel dragster powered by Vita C Spot got the jump off the starting line with a .055 reaction time and a winning time of 3.699 second at 330.39 mph in front of Maroney’s 4.056 seconds at 234.09 mph.

“I have been communicating with Chip Lofton from Vita C Shot all day and this is a big win. He gave us a shot at the beginning of my career and I am very thankful. Having Phillips Connect onboard along with Toyota was a big help this weekend and we want to keep proving ourselves to all our sponsors,” said Ashley.

The second round saw Ashley face his technical alliance partner Brown in a battle between two team owners, Toyota teammates and friends. Throughout Ashley’s young career Brown has been a consistent sounding board and now that the pair have begun officially working together, they are becoming an even stronger force.

When the Christmas Tree flashed Ashley and Brown left at the same time posting .053 reaction times. Racing down the track Ashley and his Mike Green and Tommy DeLago Phillips Connect Top Fuel dragster began to pull away and got to the finish line first with a winning time of 3.692 seconds at 333.33 mph. Ashley’s winning time was the quickest run of the session and gave him lane choice in the semifinals over four-time world champion Steve Torrence. The win also evened Ashley’s career record against the three-time champion at 3-3.

Ashley was 1-4 against Torrence in semifinal races over his career but his performance numbers throughout the weekend gave the 2020 NHRA Rookie of the Year confidence going into the race. Ashley got the jump on the starting line and never trailed in the drag race. He hit the finish line in 3.702 seconds at 329.42 mph against Torrence’s 3.731 second run at 326.00 mph. It was a close race between the two Toyota back Top Fuel dragsters and set up a showdown between the 2019 and 2020 Rookies of the Year.

In a final round that was the capstone race on an amazing weekend of NHRA drag racing action Ashley and Prock showed the future for the sport is loaded with young talent. Each driver was nearly psychic off the line with Prock’s .049 reaction time nearly equaled by Ashley’s .050. Both dragsters powered down the track hitting on all eight cylinders, but Ashley’s Toyota dragster was out in front and took the win 3.694 to 3.713 seconds. It was Ashley’s third career Top Fuel victory and his first “major” win at one of the NHRA’s signature national events.

“Winning is great but when you can put on a good show for the fans that is even better. It started for us in qualifying when Mike Salinas and our team both went 3.67 seconds. All the close racing today was really a win for the fans. I was happy to see the attendance this weekend, especially yesterday and today. The NHRA community is very strong,” added Ashley.

Ashley will leave the Winternationals as the Top Fuel points leader and will be back on track at the NHRA Arizona Nationals in five days.