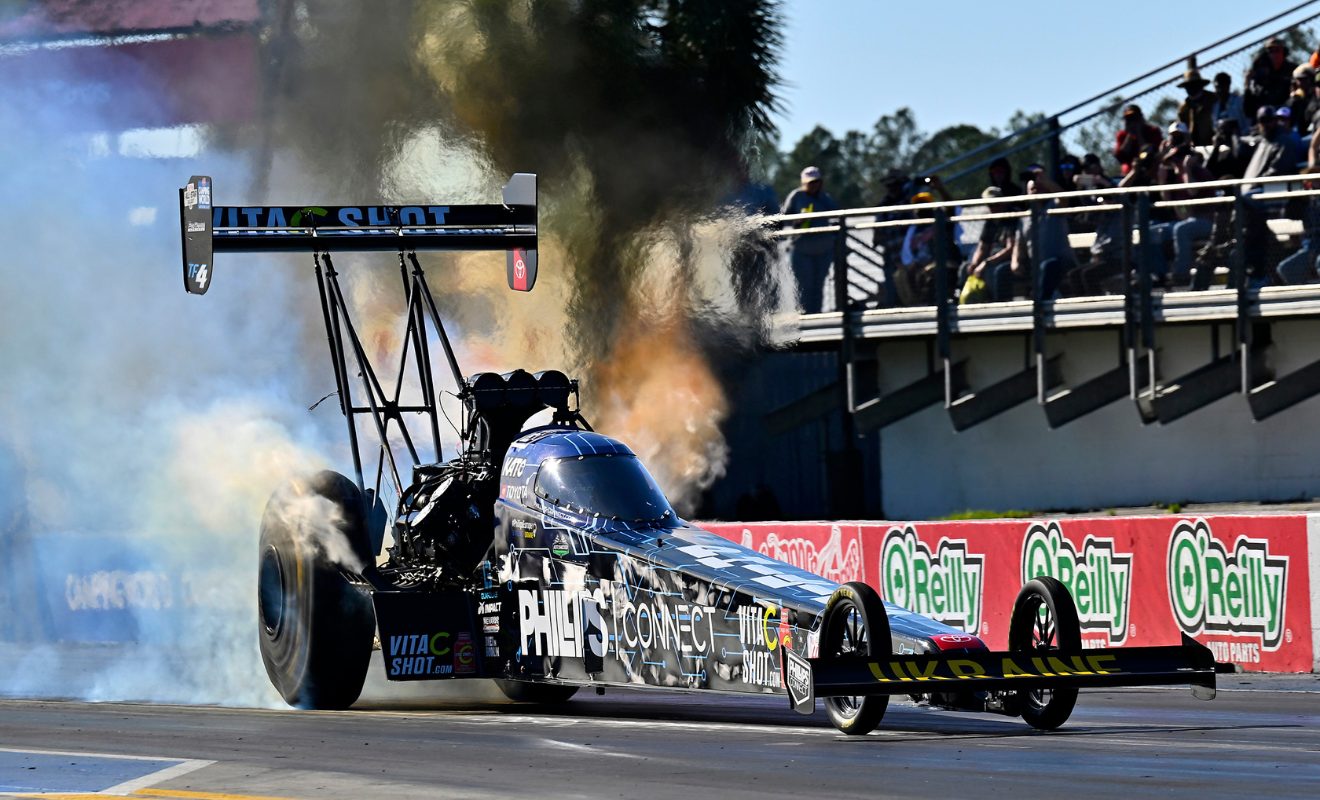 Headed into the fourth NHRA Camping World Drag Racing Series event of the season Justin Ashley and the Phillips Connect Toyota Top Fuel team powered by Vita C Shot are No. 2 in the points, coming off a semifinal finish at the Gatornationals and looking forward to the challenge of the first four-wide race of the season. Ashley opened the season with a win at the historic Winternationals and kept that momentum rolling. With the Las Vegas Four-Wide Nationals coming up this weekend the rising star behind the wheel is looking forward to success in the desert.

“The four-wide races are great because they have a tendency to be unpredictable,” said Ashley, who has three career Top Fuel wins. “I have competed in two four-wide races and look forward to the challenge of racing in my third. Anything can happen with 40,000 plus horsepower on the starting line. As a driver, it’s a great test of concentration.”

This weekend there will be four qualifying runs, affording every team the opportunity to make at least one run in each of the four lanes. This is a return to the previous qualifying the NHRA offered prior to the pandemic. Ashley’s technical alliance with Toyota teammate Antron Brown will be critical this weekend for his crew chief tandem of Mike Green and Tommy DeLago.

“Mike and Tommy have a long history of experience and expertise. They’ve seen and done everything in the sport of NHRA Drag Racing. Being able to work closely with Antron’s team and their collective of crew chiefs, in addition to that expertise and experience, is crucial to our success,” said Ashley. “Our Phillips Connect/Vita C Shot team has been doing a great job. Dustin Davis has put together a great group of guys on and off the racetrack. We are excited about the start of the season and also know we have a lot more work ahead of us.”

Between the Gatornationals and the Las Vegas Four-Wide Nationals Ashley and Davis Motorsports announced the extension of their sponsorship with Phillips Connect through the end of the 2022 season. Originally slated as a three-race trial program both groups immediately saw the success and wrapped up a long-term deal. The at track marketing opportunity combined with the hospitality aspects were a win-win for everyone involved.

“We originally chose to partner with Justin because of the culture fit with our team,” explained Rob Phillips, Founder and CEO of Phillips Connect. “We immediately saw he was in sync with our company culture and objectives. He came in early and spent a week in California learning about our products, sitting in on customer Zoom meetings, and performing product installations. He was sincerely interested in learning why our products and company existed, and the extensive value that our products bring to the transportation industry.” Justin knew that by creating a deeper understanding, he’d be much more valuable as a brand ambassador for Phillips Connect.”

Ashley has built his program on maximizing business-to-business relationships. His programs with Auto Shocker, KATO Fastening Systems, Toyota and Lucas Oil have continued to grow since he broke into the NHRA in 2019. Throughout the racing season and off-season Ashley works to increase and enhance all his marketing programs.

“We have so many great marketing partners and we are seeing excellent activation and growth across the board,” said Ashley. “I am so grateful for all of our partners. I am extraordinarily excited to continue working with Phillips Connect throughout the 2022 season. I am equally as excited to continue working with Chip Lofton, Mark Beaver and Vita C Shot. There are so many positive things happening on and off the racetrack. We want to put our best foot forward to make sure that continues this weekend at The Strip at Las Vegas Motor Speedway.”

Las Vegas is one of the tracks where Ashley has the most experience. He made some of his first professional passes in 2019 at the Toyota Nationals. He has raced to two semi-finals at the Fall national event so this weekend the 2020 Rookie of the Year will be looking to improve in the unique four-wide format. Qualifying will begin on Friday and Saturday with two sessions each day at 1:00 p.m. and 3:30 p.m. Final eliminations will begin on Sunday, April 3, at 12:00 p.m. with three quads of racing action.