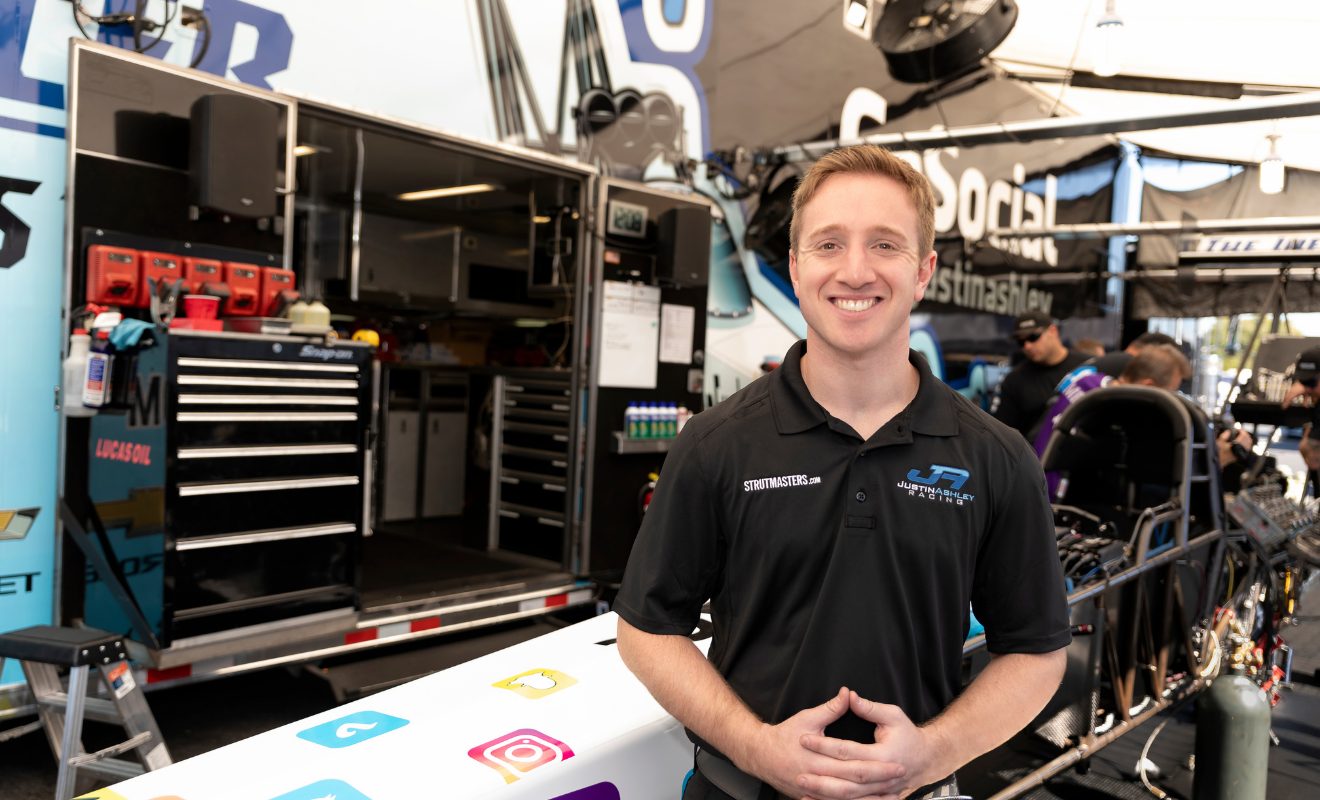 Opening the 2022 season with a Top Fuel win at the Lucas Oil NHRA Winternationals gave Justin Ashley and the Phillips Connect/Toyota Top Fuel dragster powered by Vita C Shot a major boost. This weekend at the historic NHRA Gatornationals Ashley and his Davis Motorsports team will be looking to add another ‘major’ title as well as a bonus payout from the $130,000 Pep Boys Allstar Callout specialty race to the win column. The opportunity to win two races in one weekend is something the third-year driver ironically has experienced since he won his first Top Fuel title during the 2020 NHRA U.S. Nationals in a rain delayed Summernationals final round on Saturday.

“I have some experience preparing to run two races in one weekend,” said Ashley. “I waited over a month to race the final round of the Summernationals and we ran that round in the middle of our biggest race of the year. I got the win on Saturday and then had to turn around and focus on the Sunday race. It takes mental discipline from everyone to compartmentalize and focus solely on the task at hand. Our team did a great job of that.”

Following his win on Saturday Ashley raced to the semifinals at the U.S. Nationals and was half of one of the most exciting runs in recent Indy history. He and Shawn Langdon tire smoked their way down the track trading the lead back and forth three times. Langdon got to the stripe first, but the memory and the experience of that race has stayed with Ashley.

“That was a wild run,” said Ashley. “Shawn and I were both on and off our throttles three or four times trying to get the cars down the racetrack. It was an exciting race and it showed through the enthusiasm exhibited by the fans. I learned a lot from that run about pedaling with 11,000 horsepower behind you. That’ll be something to lean back on this weekend if the Gatornationals track gets tricky.”

Since his rookie season Ashley has won three Top Fuel races and last season was in title contention coming down the home stretch of the season. For a young team owner and driver earning round wins pays dividends on and off the track. Ashley will be entering the Gatornationals with Phillips Connect as his primary sponsor. The deal was announced at the beginning of the season as a three-race sponsorship and the team is in discussions to extend the relationship for the rest of the season. The marketing benefits of getting the double exposure from the Pep Boys Allstar Callout as well as the Gatornationals is a huge plus for Phillips Connect as well as Ashley’s other sponsorship relationships with Auto Shocker and KATO Fastening Systems.

“The Pep Boys Allstar Callout event gives our team an added opportunity to provide value for our marketing partners,” said Ashley. “That, in conjunction with our Lucas Oil pitside hospitality, helps provide an elite platform for success on and off the racetrack.”

Last season at the Gatornationals Ashley had a tough to beat race car on race day. He qualified No. 12 and took out Brittany Force and veteran Doug Kalitta to reach the semifinals. Pulling up beside rookie Josh Hart an unfortunate mechanical issue ended his race day.

“We had a great race day at the Gatornationals but simply ran into a mechanical gremlin that kept us from racing Josh,” said Ashley, who won the Gatornationals in Top Alcohol Dragster in 2017. “I was so proud of the team’s performance that Sunday. We learned from it and went on to have a great season. I am excited to get back to the Gatornationals and represent our team and sponsors in the best light possible.”

Ashley’s weekend of racing action will begin on Friday afternoon with qualifying at 5:30 p.m. and Saturday will be filled with Pep Boys Allstar Callout first round run in conjunction with the second qualifying session. There will be another professional qualifying session that includes Pep Boys round two and Ashley could get a third pass on the day that will not count towards qualifying if he reaches the Allstar Callout final round racing for $80,000. Final eliminations for the Gatornationals will be contested beginning at 11 a.m. on Sunday.