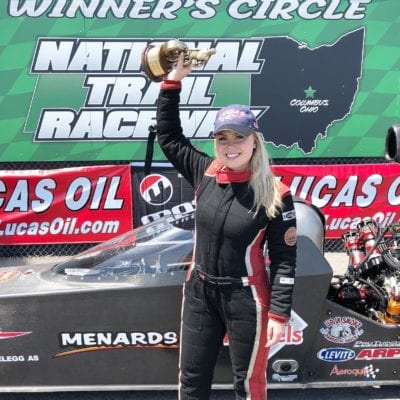 NHRA Top Alcohol Dragster team Randy Meyer Racing made the most of their weekend and came out on top at the Buckeye Nationals in Columbus, Ohio. Julie Nataas drove the Oslo Tapet Gulvbelegg AS-backed dragster in the first Division 3/North Central Region Lucas Oil Drag Racing Series event to the No. 1 qualifying position with a 5.28 en route to her second straight winning weekend.

“I was still on a high from my first win going into Columbus,” said Julie. “I had heard it was a rough track, so I figured I would do some driving and get more experience driving the car.”

Julie went on to defeat JP Gutierrez in the opening round of eliminations of the 8-car field, followed by Mike Kosky for a final round match-up against Chris Demke.

“I know Chris has a good car and that the round was important for the regional championship as we both race the North Central,” Nataas said. “I got the start line advantage, saw him out in front of me for a little bit before I drove around him. Getting my second win just a week after my first one in Charlotte for the NGK Spark Plugs 4-Wide Nationals was awesome! Thank you to the entire Randy Meyer Racing Team for a great weekend.”

Julie is now going home with back-to-back wins and already holds two quarterfinal finishes, and one semifinal appearance for the 2019 season. Julie will compete in Norwalk, OH on May 17-19 to keep her winning streak going, and will continue to compete in the North Central Region at the Indianapolis, Chicago, and Kentucky events to battle for her first Regional Championship. Teammate Camrie Caruso will join Julie at the Norwalk Regional event for her second race in the Top Alcohol Dragster category.