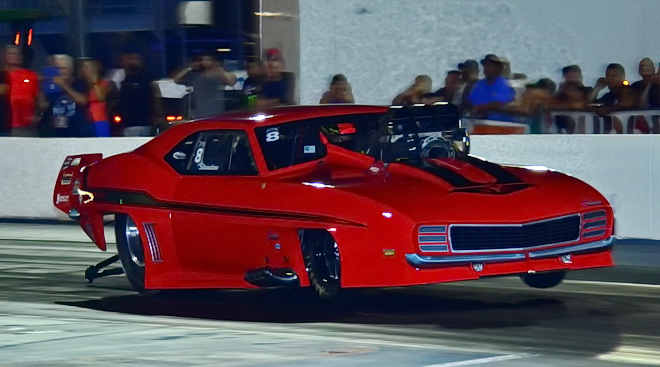 JRi Shocks racers cleaned house at the recent PDRA event in Tulsa, Oklahoma, in front of the largest crowd of the season. In addition to winning four of the six suspended class overalls, the Pro Extreme, Pro Boost and Pro Nitrous classes featured an all JRi final.

Pro Extreme points leader Bubba Stanton (above) increased his points lead with his third overall of the season after a difficult engine swap that had his crew going until near 6am. Stanton would face off against Dubai’s Badir Ahli in the all JRi Shocks Pro Extreme final and would best him with a 3.576, 215.82 mph run for the overall.

In the Pro Nitrous event it would again be an all JRi final as Jason Harris faced of against Tommy Franklin.

Harris would take the win over Franklin with a pass of 3.867-seconds pass at 172.45 mph, although the run wasn’t as clean as he would have liked. “I had my hands full. I about wrecked it, but you get in race mode and it makes you do dumb things sometimes,” said Harris. The win in Tulsa marked Harris’s 5th of the season.

GALOT Motorsports teammates Todd Tutterow and Kevin Rivenbark would make it the third all JRi final once again in the new Pro Boost class, as Tutterow is looked to maintain his lead over Rivenbark for the inaugural class championship in 2014.

Unfortunately for Tutterow, after qualifying number one and setting a new class record of 3.823 at 191.95 in the semifinals, he lost traction in the final and slowed to 4.838 and 104.99 mph, giving Rivenbark the overall.

“I’m super happy to get the win, but this also really helps me in the points,” said Rivenbark, who inches closer to Tutterow in the points battle for the Pro Boost championship. “I’m just happy it was an all-GALOT final.”

Columbus, North Carolina’s Dylan Stott had his work cut out for him after qualifying last in 13th place but would eventually earn his second PDRA Sportsman win of the season after defeating Billy Albert in the final.

“I think the fact that so many of the racers making it to the finals are running JRi Shocks speaks volumes for our product,” said Pete Brower, Drag Racing manager for JRi Shocks. “Having 7 of 12 guys in the finals on our product and three all JRi finals, with several of these guys leading the points in their class is quite a statement.”