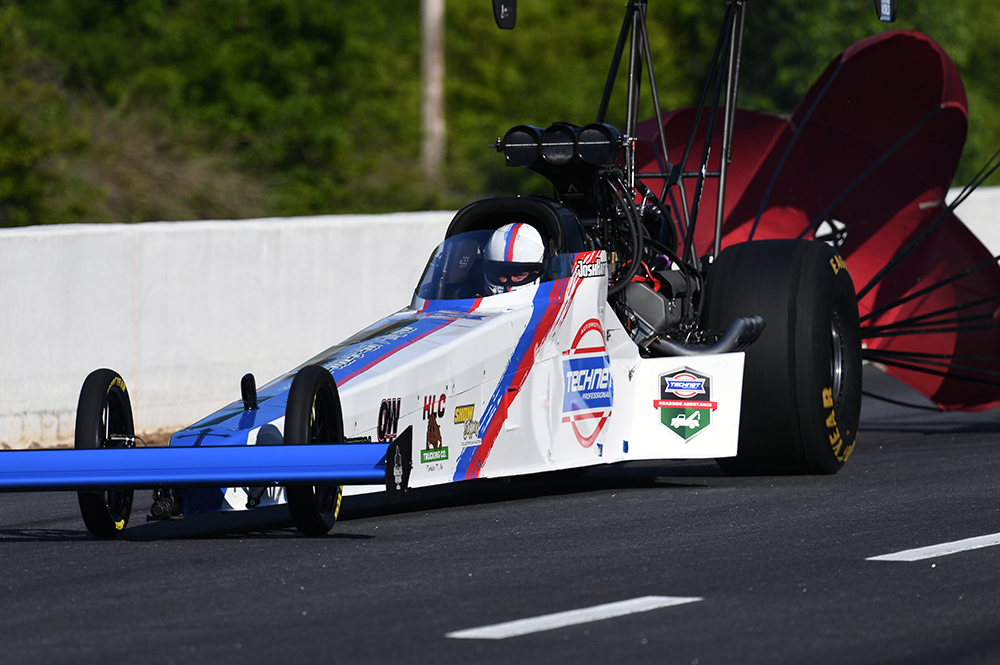 Every racer eventually finds a race track that for whatever reason they have consistent success throughout their career. This weekend Josh Hart is hoping zMax Dragway outside of Charlotte, North Carolina, will become that track for the second year Top Fuel racer. The team will be racing under the TechNet banner for the first time this season. They will be riding with the two-time Top Fuel winner at the Richmond national event as well. Hart’s relationship with TechNet extends well behind the pit area of his race team.

“I am excited to be running the TechNet Top Fuel dragster this weekend in Charlotte and for the next couple of races,” said Hart, who owns and operates Burnyzz Speed Shop in Ocala, Florida. “They are an amazing partner for us at the track and at Burnyzz. We are proud to be a part of the TechNet family because they do things the way I do things which is offering only the best service and exceptional care.”

TechNet Professional Automotive Service is an elite network of more than 15,000 repair shops across North America. They are locally owned and care about delivering exceptional customer care and service. Their staff is well-trained and only uses quality parts. Much like Burnyzz Speed Shop that are also very tied into their local communities.

The beginning of this NHRA season has seen Hart battle several issues including shaking down a brand-new 11,000 horsepower race car to random gremlins that have short circuited his success. Hart is putting all those issues behind him and heading to a track where he parked his race car in the winner’s circle the last time he was on the property and raced the final quad in his first attempt at four-wide racing.

“I am not a superstitious person, but I do think there are some tracks where racers just have better performance for whatever reason,” said Hart, who won the Carolina Nationals Top Fuel title last fall. “I think the facility at zMax Dragway is one of the nicest we go to on the tour and they have a great crowd. We just need to string together some good runs and put some of these weird issues that have hurt us in the rearview mirror.”

The highlight of the 2022 season has been a semifinal finish at the Arizona Nationals where Hart started as the No. 8 qualifier and then outran Leah Pruett and Rob Passey before dropping a close race to eventual winner Mike Salinas. The consistently quick elapsed times and momentum have popped up at the following two national events, but the team is focusing on building a strong foundation.

“We had a good day in Phoenix, but it wasn’t perfect and we are striving for perfection which means four win lights on Sunday,” said Hart. “We are still a young team that had a lot of success in our first 13 races. I never took that for granted which is why we invested over the off-season in a new race car and more parts. We could have just kept doing the same stuff and maybe gotten away with it, but I am committed to long-term success here and that means digging deep to get race wins and chase the championship.”

An early exit at the final national event at Houston Raceway Park only further motivated Hart to focus on the upcoming race in five days. The short turnaround did not give the young driver any chance to dwell on pass results.

“I truly believe anything is possible, I have it written on the rear wing of my race car,” said Hart. “I started my first business with only $300 and now we are racing Top Fuel at the highest level against the toughest drivers in the world. This weekend is going to be exciting and I can’t wait to get back to the starting line.”

Hart and his team will also be supporting another racer this weekend as his daughter Helen will be participating in the second Baby Walker Nationals event. Two-year-old Helen Hart, daughter of Top Fuel driver Josh Hart and his wife, Brittanie, and one-year-old James Alexander, son of Funny Car driver Blake Alexander and wife Leah, will square off on Saturday between rounds in what after just one event in Houston has become a fan favorite. The race which is backed by Red Line Oil will be a one-shot, winner-take-all, dash-for-cash with the winner earning $100 from Red Line Oil plus a gift card good for an additional $100 worth in oil and other Red Line lubricants for future Jr. Dragster competition.

Helen is a big fan of Cocomelon but eschews swimming and bath time, preferring instead to play in the dirt. When she’s at her home base in Ocala, Fla., within walker distance of the Don Garlits’ Museum of Drag Racing, she fills up on cheese and provides moral support to her favorite race car driver, her dad.

James, who as a Charlotte resident may have a home field advantage at next week’s event, watches Daniel Tiger on TV, likes to snack on berries, and exercises by throwing balls to his mom and cheering for his dad on FOX TV coverage of the NHRA Pro series.

Qualifying for Hart and TechNet Top Fuel team will begin with two passes on Friday and two more on Saturday. Final eliminations for the 16 quickest race cars will start at noon ET on Sunday. The race will be broadcast on FS1 beginning at 7 p.m. ET.