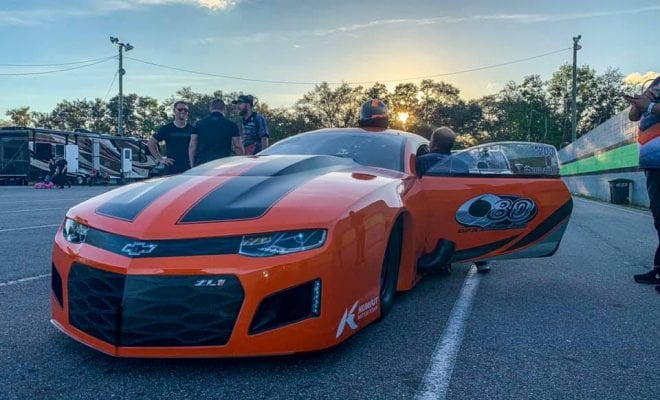 A planned vacation kept Jose Gonzalez from attending the DRAG ILLUSTRATED World Series of Pro Mod a year ago.

Thanks to some careful planning in 2019, Gonzalez will get both a vacation and a chance to win $100,000 in his turbocharged Q80 Racing Camaro.

The Pro Mod standout has locked in his spot for the first time at the World Series of Pro Mod, which takes place Aug. 9-10 at Bandimere Speedway, and Gonzalez is eager to compete against the best of the best in Pro Mod – so much so that his vacation got a new date this year.

“We’re very much looking forward to this,” Gonzalez said. “(Drag Illustrated Founder and Editorial Director) Wes (Buck) called me last year and I already had vacation time with the family, so I couldn’t change it. This year, he told me well beforehand so we were able to change everything so I could make it.”

The big one-off races have always brought out the best in the ultra-talented Gonzalez, who has wins and standout performances across a number of different Pro Mod series.

He’s currently second in NHRA Pro Mod points, fresh off back-to-back finals appearances and a win in Bristol, and is widely regarded as one of the best drivers in the ultra-talented class.

After his win in Orlando in January, Eric Dillard of ProLine Racing called Gonzalez “the most talented driver when it comes to raw talent that I’ve seen and had the opportunity to work with,” and it would be hard to argue.

His track record also indicates that Gonzalez is always ready for a challenge, and he’ll certainly get that in his debut at the biggest and richest Pro Mod race in the history of the known universe.

“I love those type of races where you face the best drivers there is,” Gonzalez said. “That’s what it’s all about, that’s why I like it in NHRA. It should be that way (in Denver). I know (Drag Illustrated Founder and Editorial Director) Wes (Buck) brings in a very good group of drivers, so it should be interesting.”

The race will also mark Gonzalez’s debut on Thunder Mountain, as the talented veteran will race at an altitude of nearly 6,000 feet for the first time.

He’s thrived in similar conditions at the likes of Las Vegas and won in Bristol, but racing at Bandimere Speedway is an entirely different challenge.

But Gonzalez has faith in a team led by standout tuner Steve Petty, who tuned Derek Menholt a year ago at the WSOPM.

Gonzalez also plans to take full advantage of the test session leading up the race.

“There’s a good couple days to test, and Steve has gone there before with Derek Menholt, so he’s got a good idea of how to race there,” Gonzalez said. “Altitude does not affect us as bad as other cars, so I think we should be okay. We’ve got a great group on this team and it’s hard to beat.

“I just like to race in competitive places and I have such a good team. We’ve assembled a great group of guys that are top-notch. I just have to do my job because I know they’ll do their job. It definitely gives me a great deal of confidence every time I go out there.”

Coupled with Gonzalez’s immense talent and penchant for performing in big moments, and it wouldn’t be a stretch to call the team one of the favorites for 2019.

Gonzalez doesn’t have a celebration planned and he would be the last to make a bold prediction, but his track record speaks for itself. He’s won at all the major Pro Mod events, leaving the WSOPM as the only one left to accomplish.

Performing the best in a winner-take-all race is never easy, but Gonzalez has every box checked to thrive on Thunder Mountain, and he’s thrilled for the opportunity.

“Before I ever did this, because of my schedule, I only used to do these types of races – Vegas, Shakedown, Orlando,” Gonzalez said. “But at the end of the day, going against all these guys has improved my driving. It doesn’t matter where you qualify, every time you face somebody you have to be on your game. That definitely helps, and when I have a group of guys like this, it all works together.”