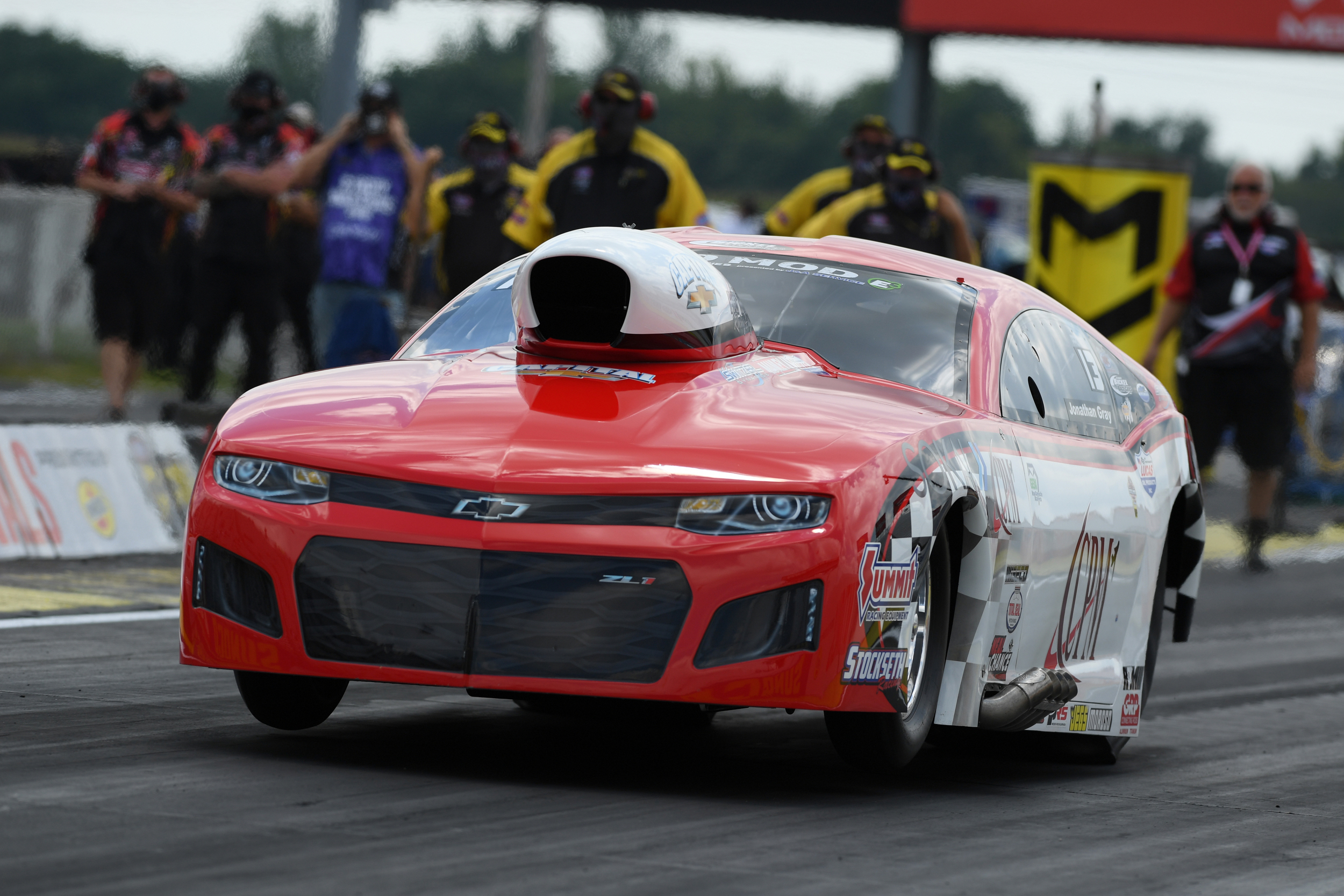 Jonathan Gray’s first goal was to not do anything that made Rickie Smith look dumb. But in the course of knocking off a pair of former world champs and then his teammate in an all-Smith tuned final, he made everyone look good — including himself.

Gray put together a remarkable performance in his first NHRA Pro Mod race in nearly three years, knocking off Bo Butner at Indy on Sunday with a steady and solid run of 5.850-seconds at 249.49 mph in the final round.

He did it in Smith’s Musi-powered nitrous Camaro, driving for Smith as the legend recovers from back surgery, scoring his second career victory in the class.

“It was really special. It might not be the U.S. Nationals, but Indy is Indy and it’s one of those deals where anytime you can win there, it’s a good thing,” Gray said. “To do it in this class, where it’s tough and a lot of great guys, it means a lot. You’ve got to bring it on Sunday, keep your head down and just keep digging. If you let up in this deal, they’ll get you because there’s a handful of guys who can win at any time.”

Gray had everyone’s number on Sunday, knocking off former champs Mike Janis and Khalid Albalooshi to reach the final round, relying a steady diet of runs in the 5.80s.

In the final, he met Butner, who made his NRHA Pro Mod debut last month, also driving for Smith. The man known as “Trickie Rickie” was getting a win either way, and it was Gray who had the chance to celebrate, leading from wire-to-wire after an outstanding .021 reaction time.

Gray knew he had a chance after winning the first round, relying on his driving talent and Smith’s expertise with a nitrous car to finish the job. 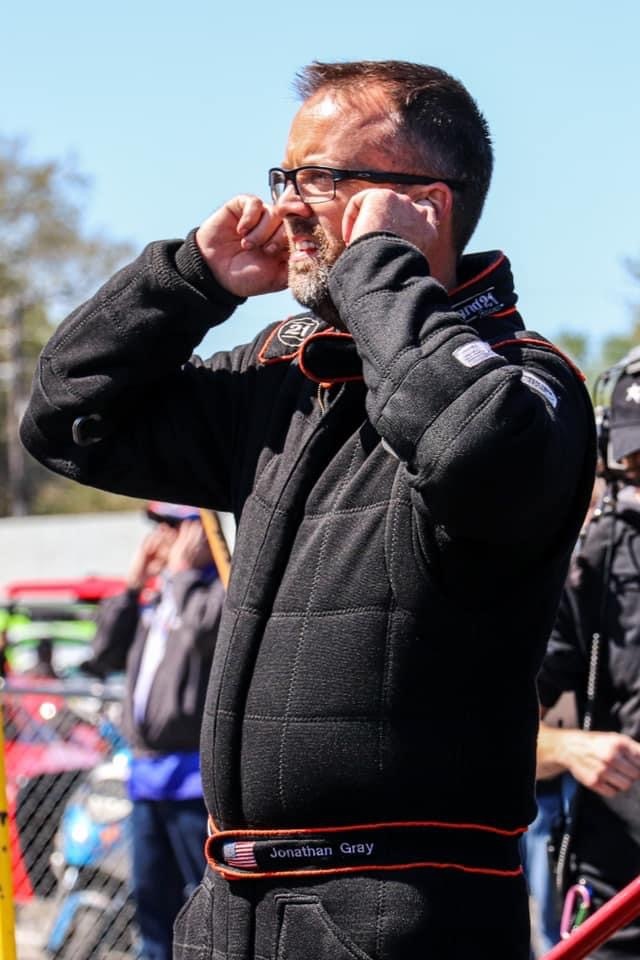 “Anytime you can have team cars in the final like that, it’s just one of those special days,” Gray said. “After we got that first round, I just felt really confident and as long as the wheels didn’t fall off, we were going to be really hard to beat. The track was hot and the car was just a textbook Rickie Smith race car on Sunday.

“He’s just hard as hell to beat on Sunday. He may not have the fastest thing, but you can bet your ass he’s going to go down the track every time. I drove pretty well and with how well the car ran, that’s hard to beat.”

Prior this race, Gray last raced in Pro Mod in 2017, winning his first career race that year driving for Smith before sitting out 2018 and 2019.

Smith called him up early this year and asked him to drive his car at the Drag Illustrated World Doorslammer Nationals in Orlando, putting Gray in an automatic ride for the first time.

The early results weren’t ideal, but consistent words of advice from Smith and then some encouragement from his wife in Indy changed things.

“I was still learning how to drive one of those things in Orlando and I blew up on one of those qualifying runs. There was a lot of different steps learning how to drive that thing,” Gray said. “But it’s funny how things just click one day and (Sunday) it all came together. My wife was with me and she said just get in there and drive the car. Once I got it in my head that it was okay, things just took off.”

He continues to impress Smith, who initially called Gray out of the blue in 2017 to drive for him. To say Gray was shocked was an understatement and the former Pro Stock racer only had one goal in mind.

“I told him I would do the best I could, but the last thing I wanted to do was make him look dumb,” Gray said.

It’s been quite the opposite, though, as Gray has been a standout in the nitrous Camaro, racing alongside Smith in 2017. It’s a different dynamic in 2020 as Smith has yet to drive this year, but it’s allowed for countless teaching opportunities that have made Gray even more dangerous.

He’s made continuous improvements, again praising the work Smith has done with him. 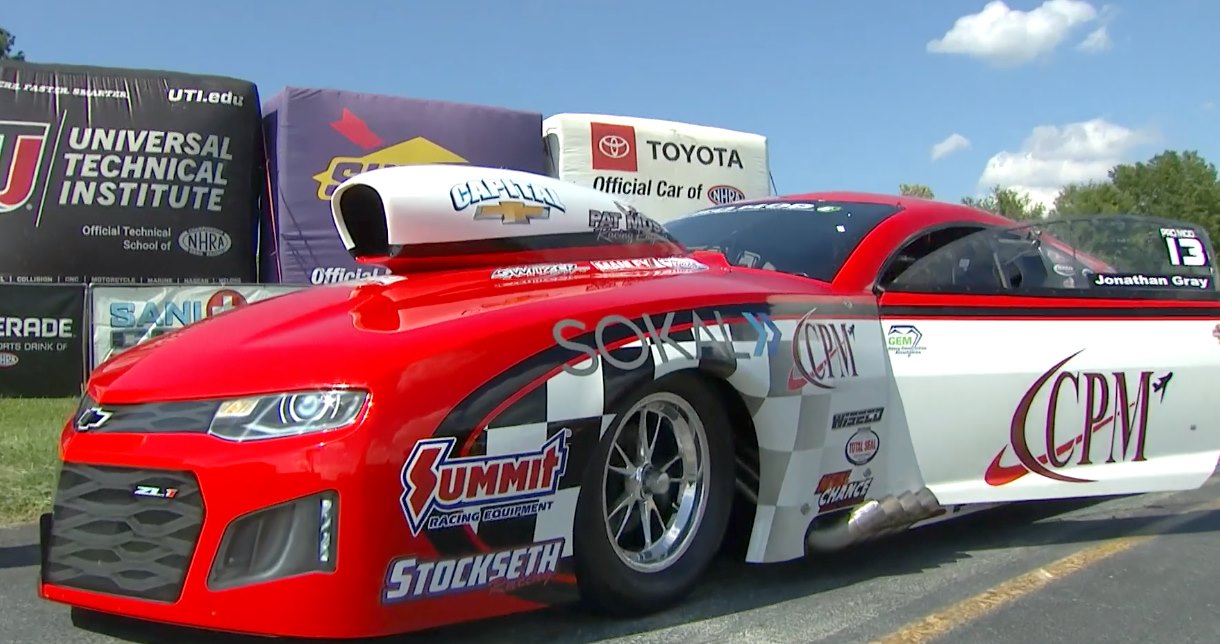 “When he’s not driving and he’s just kind of watching what I’m doing, that’s priceless,” Gray said. “He’s probably really taught me how to race. He’s taught me what to watch for in other races because he’s watched everybody do it, and he’s just passed that onto me.

“As far as a race car driver, he’s been the reason I’ve turned into the kind of driver I have.”

That tutelage and Gray’s natural ability has made him a championship contender in the loaded NHRA Pro Mod class.

Gray figures winning again in Indy – this time at the U.S. Nationals over Labor Day Weekend – is the perfect way to keep this momentum going.

“That’s definitely the goal,” Gray said. “We’re going to try to come back and win that. In drag racing, that’s the ultimate goal, winning the U.S. Nationals.”

Jonathan Gray raced to his first @e3sparkplugs @NHRApromodified win since 2017 at the @Dodge #IndyNats presented by @Pennzoil!!