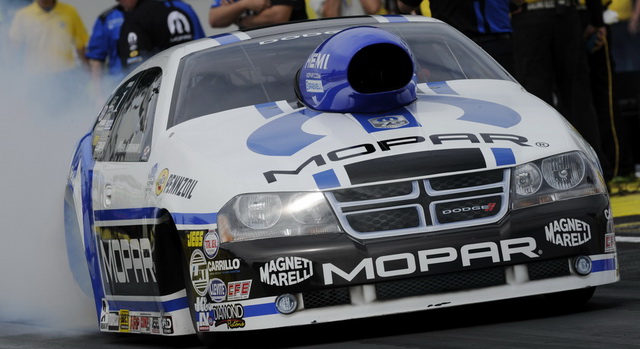 Defending NHRA Mello Yello Series Pro Stock world champion Allen Johnson is riding high from a recent victory at the NHRA Gatornationals. It was the first time the Tennessee native won the tradition-rich Florida event and he’s hoping that his team’s success there will provide some early-season momentum as he prepares to defend his SummitRacing.com NHRA Nationals title in two weeks at The Strip at Las Vegas Motor Speedway.

The heart-pounding action of the NHRA Mello Yello Drag Racing Series returns to Sin City April 5-7 for the first of two scheduled stops at the famed multi-purpose motorsports facility in 2013.

After getting off to a bit of a sluggish start in the new season’s first two races, Johnson seems to have eased back into the winning groove that saw him dominate the 200-mph factory hot rod category during the second half of last season. After welcoming a new teammate in four-time champ Jeg Coughlin, Johnson seems comfortable in his role as one of the elite drivers in the category.

“Our goal for each race is to qualify No. 1 and win the race,” Johnson said. “I think we’re one of the premier teams in Pro Stock now, and I think anyone would tell you that. We’ve got a crew that makes great decisions based on scientific methods and data, and we keep improving those decision-making tools. We’ll be right there again (for the championship).”

Johnson won the Gainesville race from the second spot behind Mike Edwards, who has qualified No. 1 at all three races this season. Last year at Las Vegas, Johnson won the race from the No. 3 spot. He is confident that no matter where he qualifies, come race day he will be a contender for the victory.

“We don’t have the fastest car right now,” Johnson said. “But we have a very consistent car and you can win a lot of races like that.”

In order to defend his Las Vegas title Johnson will face some tough competitors, which includes ultra-quick Edwards, young gun Vincent Nobile, who won the season-opening Winternationals, and Gatornationals runner-up Jeg Coughlin. Phoenix winner Erica Enders-Stevens, and the Summit Racing tandem of Greg Anderson and Jason Line, who are always tough at their team owner Ken Black’s home track, also will be in the hunt for victory.

Two of those drivers – Coughlin and Nobile – are teammates with Johnson, which makes the task of beating them a little more complicated for the driver of the Team Mopar Dodge Avenger.

“Everybody asks me why I hired my two assassins, two of the best drivers in the class,” Johnson said. “I said that they make me better.

“Last year, at the last six races, I ran Vincent every race, and beat him in all six. I beat him because he challenges me and makes me better. That makes me better as a driver overall. Same thing with Jeggie; I knew that I would have to do my ultimate best to beat him. I hope we can all go head-to-head a bunch.”