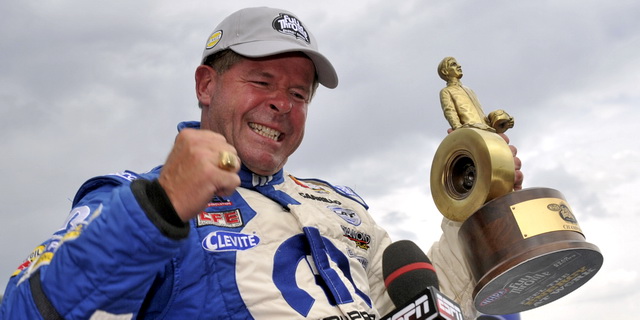 There are still five races before the NHRA Mello Yello Drag Racing Series Countdown to the Championship begins. But as far as Pro Stock standout Allen Johnson is concerned, his personal countdown starts this weekend at Bandimere Speedway. Johnson, the 2012 world champion, has dominated the competition when racing at an elevation of more than 5,800 feet in Denver and he is ready to continue that trend at the 35th annual Mopar Mile-High NHRA Nationals at Bandimere Speedway. 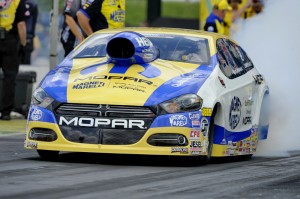 He enters as a five-time winner at the track and has advanced to the final round in each of the last seven years. This year, Johnson will look to make it three straight Denver victories and he remains as focused as ever when it comes to this particular event.

“I drive at Denver like it is the last race of the Countdown and we’re going for the championship,” Johnson said.  “The seriousness of this event for our team is at a very high level. We want to earn our place with Mopar and give them all the exposure we can at this event. We’re working to add to that streak of success again this year. It would be especially fitting to win the Mopar Mile-High Nationals as we celebrate the 50th anniversary of the race HEMI with Tom Hoover, the father of the HEMI in attendance.”

Spencer Massey (Top Fuel), Cruz Pedregon (Funny Car), and Shawn Gann (Pro Stock Motorcycle) were also winners of the 2013 event. The race will once again be televised on ESPN2 and marks the 14th of 24 races during the 2014 season.

It will also be the first Denver race for the Mopar/Magneti Marelli Dodge Dart that Johnson debuted this year, adding an extra layer of importance for the Greeneville, Tenn. native.

“There is a certain level of satisfaction and pride to do well at Bandimere so consistently,” Johnson said. “We’ve done well here and we know we can win. We feel good and confident going into it and now we just have to do it with the new Dodge Dart. “

Johnson is currently in the thick of another championship battle in a loaded Pro Stock field. He is second in points, trailing only Erica Enders-Stevens, and has posted three victories in 2014. But Johnson feels as though there is another level his team can reach. A year ago he won in Denver, knocking off V Gaines for the second straight season in the final round, and his teammate and reigning champion Jeg Coughlin Jr. followed by taking the next two events on the three-week NHRA Western Swing in Sonoma and Seattle.

“I feel like every year when we get to this point of the season that our Mopar team goes into a pre-Countdown mode,” Johnson said. “We don’t just put on our game face, we get really serious about going rounds and getting wins. Last year, the Roy Johnson tuned HEMI engine swept the Western Swing and we’d certainly like to repeat that with our new Dodge Dart. We’re in pretty good shape heading into the Western Swing.”

But nobody has been better in 2014 than Enders-Stevens, who claimed her class-best fourth victory of the season at the most recent event in Norwalk. Johnson will also have his hands full with the likes of Vincent Nobile, Greg Anderson, Jason Line, Dave Connolly, Shane Gray, Jonathan Gray and Chris McGaha.

But there’s no denying the advantage Johnson has held in Denver, dating all the way back to his first runner-up finish at Bandimere Speedway in 2002. Victories followed in 2013, 2012, 2010, 2009 and 2007, making Johnson hungrier than ever to maintain that success.

“I’d like to go into the Mopar Mile-High Nationals feeling a little better than I did right after Norwalk, but the Mopar Mile-High Nationals are just so fantastic that it’s easy to get back up for it,” Johnson said. “You feel a certain amount of pressure to continue the success we’ve had at Bandimere Speedway, but at the same time, you know you can do it and we really just want to do it again.”