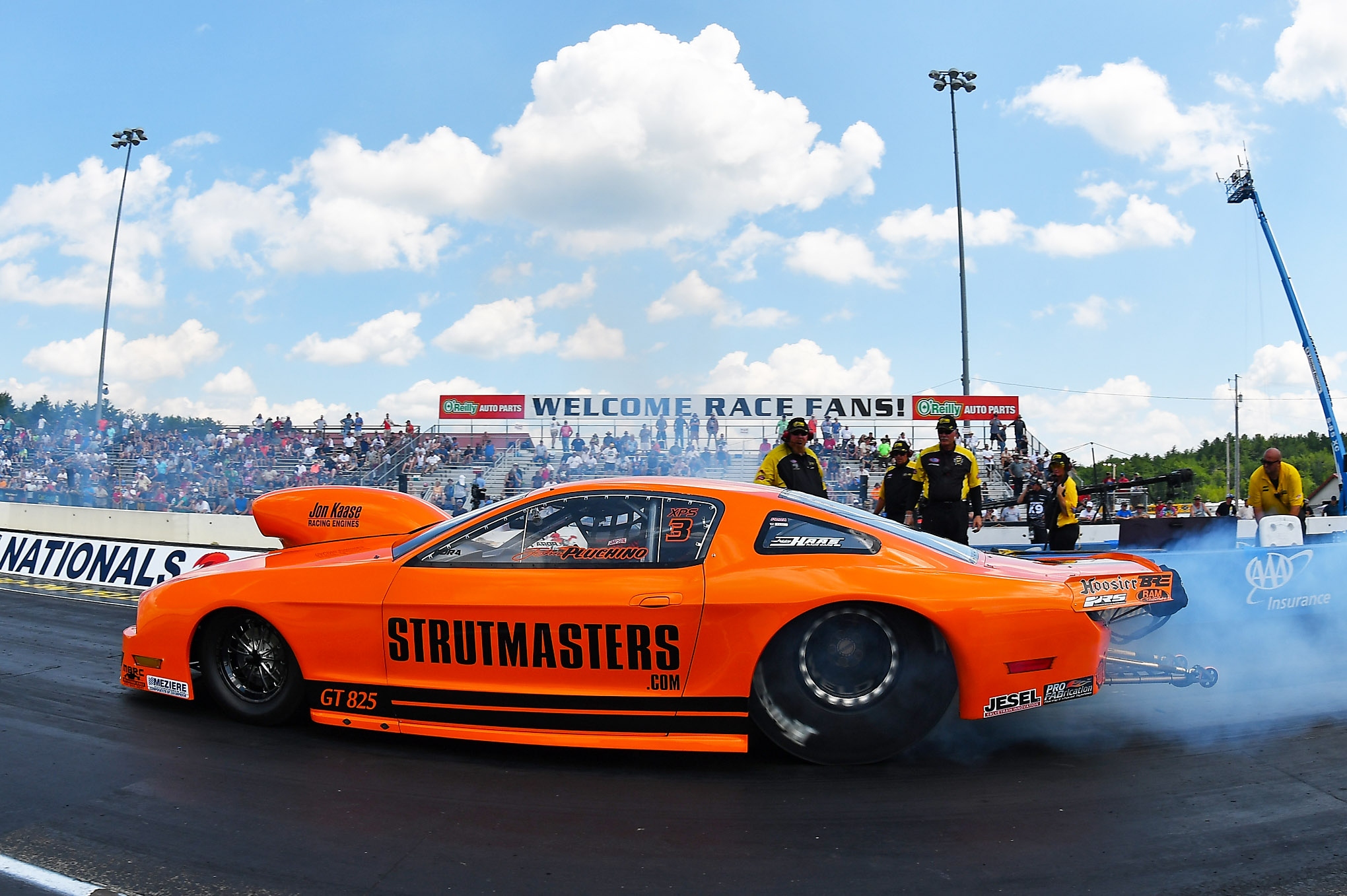 “I couldn’t be happier to extend my partnership with Chip Lofton and Strutmasters.com,” said Pluchino. “I really want to get them a couple Wallys this year. We also have the continued support of Jon Kaase Racing Engines, Ram Clutches, Book Racing Carbs and Precision Racing Suspension. We have two new partners this year that we’re excited to work with, Hoosier Racing Tires and NGK Spark Plugs.”

Pluchino’s 2020 schedule is made up of five of the six races on the NHRA Mountain Motor Pro Stock schedule, plus a selection of events on the to-be-announced PDRA Extreme Pro Stock schedule. Pluchino will run the NHRA races in Charlotte (spring race), Richmond, Chicago, Brainerd and St. Louis.

The two-time PDRA Pro Outlaw 632 world champion made his MMPS debut in 2019, running a limited schedule of NHRA and PDRA races. He balanced his rookie season with his second Pro Outlaw 632 championship effort, running both cars at several races. That changes this season, as Pluchino will focus on the MMPS car.

“You always have a short-term goal and long-term goal or a dream. This is it now,” Pluchino said. “Everything else that I’ve done so far, those were goals and dreams of mine, to win championships [in Pro Outlaw 632]. But this was the ultimate dream, to come race Mountain Motor Pro Stock, run a full schedule, race for a championship hopefully and run at the NHRA national events. This is as exciting as it gets. Everything that we’ve worked for was for this point, for 2020. I’m more excited than I can really express.”

Pluchino grew up watching his father race in IHRA Pro Stock and shares his father’s passion for the class. With new cars being built and familiar faces returning to the class, he sees a lot of potential for MMPS, especially with two premier places to race. The excitement building around the class adds to Pluchino’s enthusiasm and eagerness to join the mix.

“I’m very excited to be a part of the class right now,” Pluchino said. “It’s at a spot where if we can demonstrate the potential of this class, I really feel like it can grow in a crazy way. I’ve watched this class since I was born. I am very excited to go head to head with a lot of these drivers. I have a lot of respect for these guys. But I’m a guy who does whatever he has to do to win on any given day. I plan on helping the class as much as I can in regard to building rivalries, playing starting line games if I have to, and seeing where the chips fall.”

Between the support from sponsors like Strutmasters.com and the faith placed in him by his father, Pluchino appreciates the opportunities in front of him and is eager to get to work proving his talents on the big stage.

“I want to thank my dad for giving me the opportunity to have the seat in 2020 in his car,” Pluchino said. “He’s worked very hard to put this program together. I also want to thank my crew guys for all the hard work they put in. I can’t wait to get back to the track with these guys so we can start chasing more trophies.”