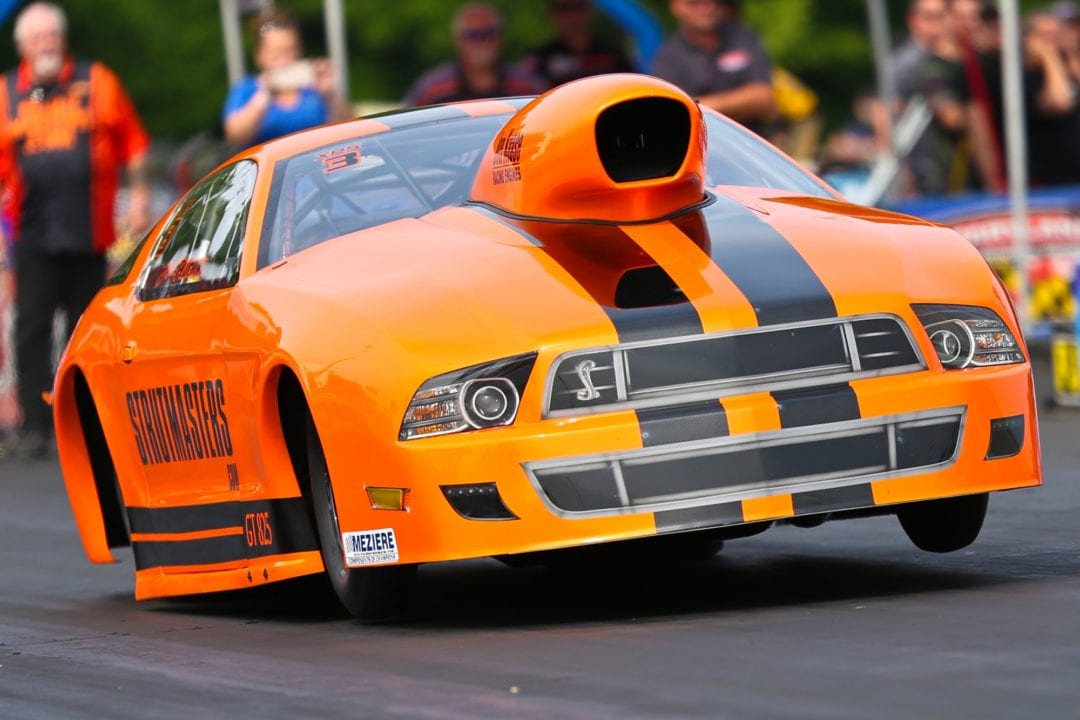 After Johnny Pluchino unexpectedly made his PDRA Extreme Pro Stock debut at the recent PDRA North-South Shootout in Maryland, the second-generation wheelman is eager to make his quarter-mile debut in the Mountain Motor Pro Stock exhibition at the NHRA Thunder Valley Nationals, June 14-16 at Bristol Dragway.

“This is a really big race for us,” Pluchino said. “There’s so many things going into this race. I’m preparing for it like it’s one of the biggest races of my life because it might be.”

The younger Pluchino made a couple test runs in the car during the PDRA Virginia race in May, then was given the chance to enter Extreme Pro Stock competition at Maryland just hours before qualifying started. It wasn’t as quick of a decision as one might think, but Pluchino took his father up on the opportunity and qualified No. 4, gaining valuable seat time in the process.

“I was actually a little torn,” Pluchino said. “I’ve been waiting to get in that car for, realistically, the last three years, but I was also torn because my dad was the points leader going into that race and he pulled himself out of the championship hunt to allow me to race. From the team standpoint and as my father’s son, I was upset, but as the driver about to get in this awesome Pro Stock car, I was happy. My emotions were going in both directions, but at that point I understood why my dad made the decision he made. It was a long-term decision and I’m really grateful for it. It was a very unselfish decision and it got me a little more prepared to go to the quarter mile come Bristol.”

Pluchino made a total of six passes in the Pro Stock car to prepare for Bristol, but he’s made countless runs in car owner Dominic Addeo’s ’06 Ford Escort in Pro Outlaw 632. The car bears similarities to the Pro Stocker, as it’s a clutch-equipped former Pro Stock car with a naturally aspirated Jon Kaase engine. Pluchino drove it to the world championship last season and has already put away two event wins and a runner-up finish in the first three races of the 2019 season.

“The class is getting tougher and tougher and we’ve been able to stay out front, but not by staying still,” said Pluchino, who plans to run both Pro Outlaw 632 and Extreme Pro Stock for the rest of the season. “We’ve been working on our program nonstop. Every race we try something new or we do something different to try to get that performance advantage. We’ve definitely been working on everything and so is everyone else and you can definitely tell. We’re very happy with where things have started, but we also know it’s only the start and there’s a lot of racing left.”

The last time Pluchino went down the track at Bristol Dragway was nearly 15 years ago in a Jr. Dragster at the NHRA Jr. Drag Racing League’s Eastern Conference Finals. The New York native dreamt of one day racing a Pro Stocker there, and now he’ll have the chance do so in a championship-caliber car.

“Bristol is a very exciting track with a lot of history, especially in Mountain Motor Pro Stock,” Pluchino said. “It’s a beautiful facility, but it also presents its challenges. We’re excited to go there and to face these challenges. I’m excited for this race because of the history of the track and being able to say I raced Pro Stock at an NHRA race after racing Jr. Dragsters there years ago, but I’m more focused on what we have to do to make sure we’re successful.”

The Pluchino Racing team jumped into the NHRA Mountain Motor Pro Stock conversation after signing a partnership with Chip Lofton and his Strutmasters.com brand. Lofton, who started the suspension manufacturing company in 1999, will be in attendance at the Thunder Valley Nationals to cheer on Pluchino and the several other teams racing with support from Strutmasters.com.

“Honestly, we wouldn’t be at this Bristol race if it wasn’t for Chip’s support,” Pluchino said. “It will be nice to have Chip there and it gives us a little more motivation to come out on top and get a trophy. It would be awesome to be in the final round and be able to hold the trophy in the winner’s circle with my dad, my crew and my sponsor.”

Johnny Pluchino and the Strutmasters.com Mountain Motor Pro Stock team will make qualifying runs on Friday and Saturday, with eliminations set for Sunday.