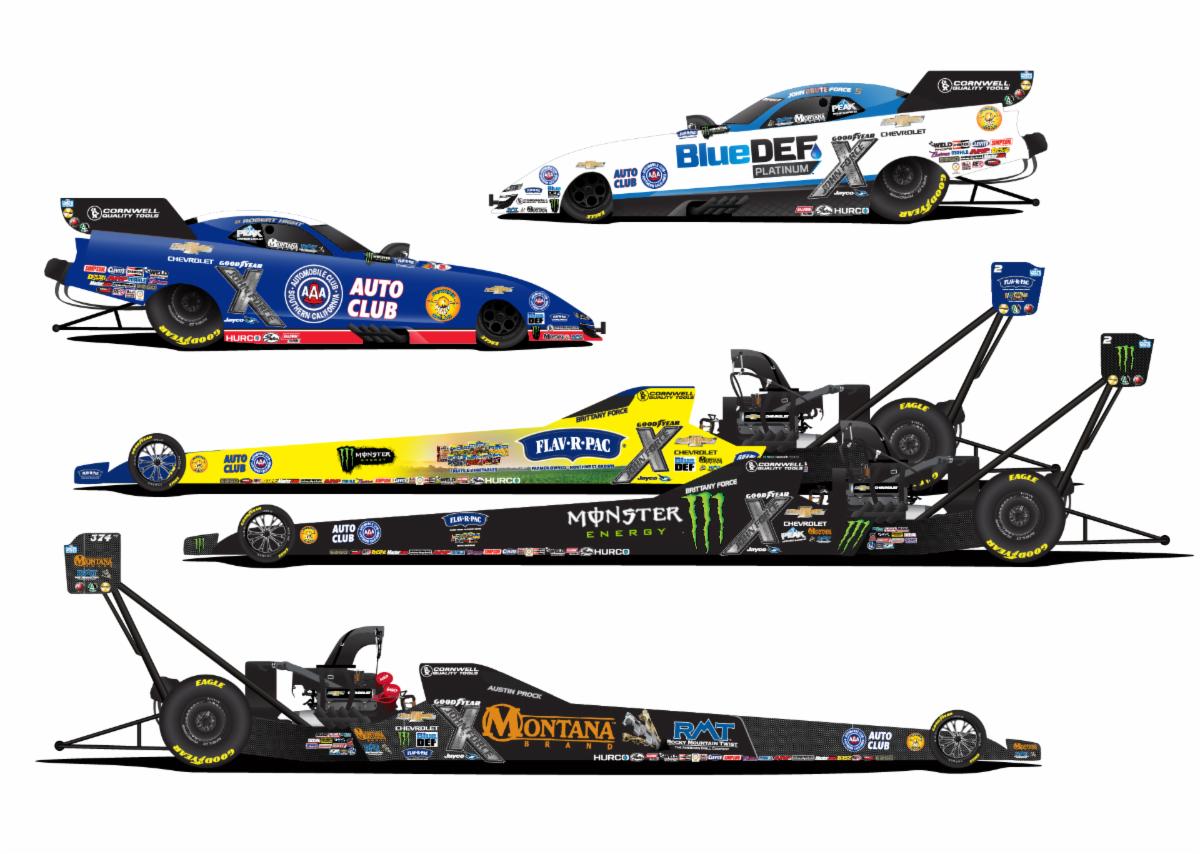 On 16-time world champion John Force’s PEAK Antifreeze and Coolant / BlueDEF Chevrolet Camaro SS Funny Car, Danny Hood, son-in-law to John Force, will continue as lead crew chief with Tim Fabrisi as assistant. Both were key players in John’s historic 150th and 151st national event wins in 2019 and led the legend in 2021 to three wins for a record total of 154 victories. In 2022, his 47th year on tour, Force will be seeking his 17th series championship while racing the BlueDEF PLATINUM Chevy Camaro SS for the first 10 races and the PEAK Antifreeze and Coolant Chevy Camaro SS for the remainder of the season.

Crew chief David Grubnic and assistant crew chief Mac Savage will continue to tune 2017 Top Fuel world champion Brittany Force’s Monster Energy / Flav-R-Pac dragster. In the 2022 season, Monster Energy and Flav-R-Pac Frozen Fruits and Vegetables will evenly split primary sponsorship duties, each with 11 events. Force wrapped up 2021 second in the points standings after chasing down a second championship until the final race of the season. In the process, Force captured a win alongside her father in Topeka, Kansas and secured a career best 12 No. 1 qualifiers.

President of John Force Racing and three-time Funny Car world champion Robert Hight will continue to drive the Automobile Club of Southern California Chevrolet Camaro SS with his tandem of crew chiefs Jimmy Prock and Chris Cunningham. The trio tallied two victories and two No. 1 qualifying positions to finish the 2021 season in eighth. Hight and the Auto Club Chevy will welcome associate sponsor Powers Solar Frames to the team for the 2022 season.

Austin Prock will enter his second full-time NHRA season in the driver’s seat of the Montana Brand / Rocky Mountain Twist dragster with crew chiefs Joe Barlam and Rahn Tobler. In 2019, Prock earned his first career victory with at the Northwest Nationals, joining the list of only 10 previous rookies to win in their first season. Prock also became only the 13th rookie to qualify for the Countdown to the Championship and finished the season eighth in points.

“We ended the 2021 season in a good spot. We had teams in contention for the championship and anytime that happens, as a team owner, it’s always good,” said John Force Racing CEO and owner John Force. “We are going to start 2022 with momentum and back to being a four-car team. Having Austin Prock back in the Montana Brand / Rocky Mountain Twist dragster with Joe Barlam and Rahn Tobler, it’s going to have a positive impact on the whole team. It’s not going to be easy, but the teams we have will be willing to put in the work to make great things happen. We’re going after race wins and championships, that’s what we’re always going after. We have the people, the partners and the parts to make it happen.”