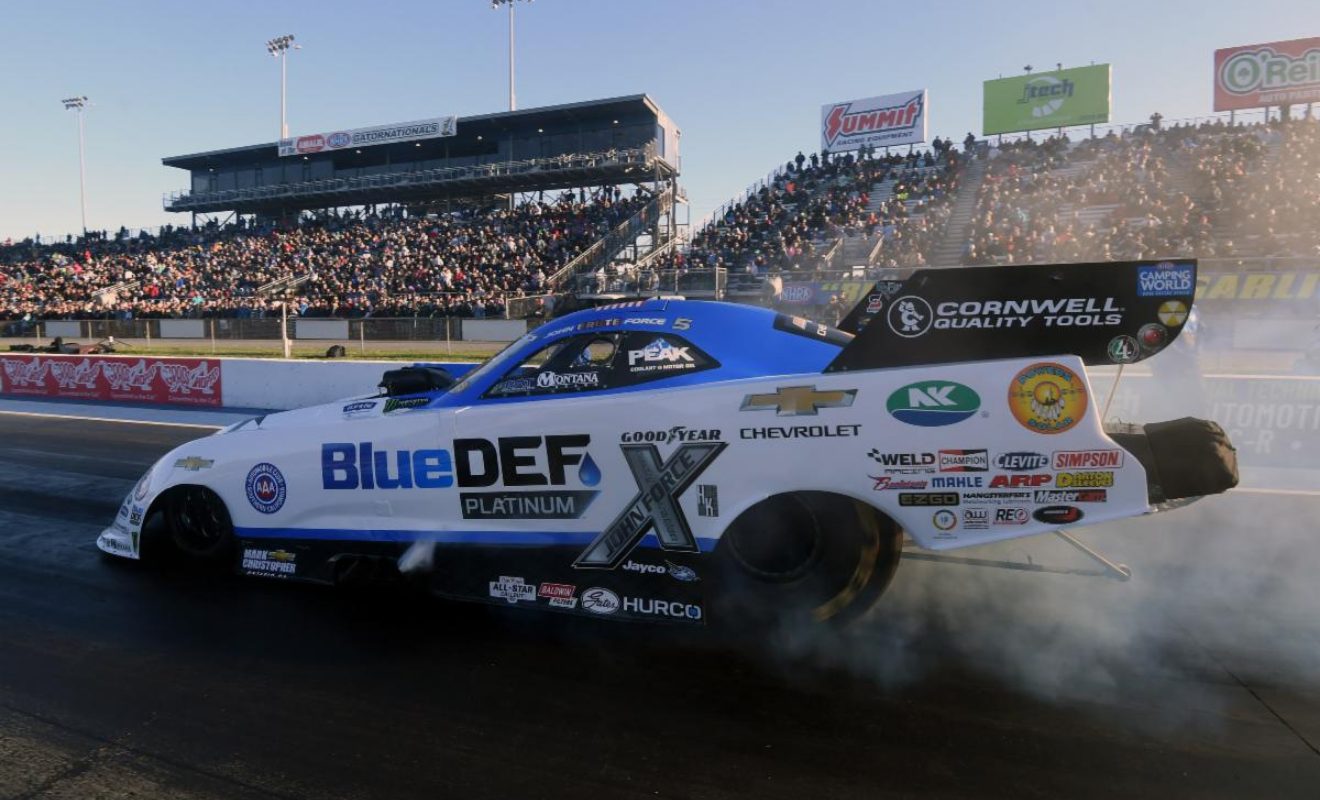 It was a wild weekend at the Amalie Motor Oil NHRA Gatornationals. Mother Nature made for some interesting racing situations that, despite a quarterfinal round exit and No. 15 race start, put John Force and the PEAK / BlueDEF PLATINUM Chevrolet Camaro SS into fifth in the NHRA Camping World Drag Racing Series points standings. Robert Hight and the Automobile Club of Southern California Chevy maintain hold of the Funny Car points lead. In Top Fuel, Brittany Force and Monster Energy / Flav-R-Pac remain fourth and Austin Prock and the Montana Brand / Rocky Mountain Twist team are ninth after they both had first round exits.
Coming into eliminations having had only one qualifying session that landed the 16-time world champion in the No. 15 spot, Force had to put his over-40-years of experience to work. In the first round, the BlueDEF Chevy would line up with fellow veteran Tim Wilkerson. Both would have trouble with Wilkerson smoking the tires before shutting off for a 6.927-second pass at 126.99 mph. Force’s Chevy would drop cylinders, but he’d pedal his way to a 4.332 pass at 289.01 for the win.
The round win would put Force against two-time and reigning world champion Ron Capps in the quarterfinals. It would be the 113th time the two would meet in eliminations, tying the most head-to-head races between two drivers, the other is between Force and Cruz Pedregon.
Force would lose traction and once again have to pedal his BlueDEF Chevy to the finish line. The 4.096-second run at 324.59 mph wouldn’t be enough for Capps who had to battle the groove but ultimately would go 3.913 at 327.90.
“What a weekend. Glad we were able to get the race in today. The conditions were tough, but we were able to get in the show here on Sunday,” said Force. “This BlueDEF Chevy, I really had to put it through the paces. Got out there and pedaled it and it worked for the first round, just missed it in the second. We’ll be okay, moved up in points quite a bit so feel good about that and we’ll just head to Vegas and try to get it done four-wide.”
Robert Hight and the Auto Club Chevy team entered race day as the No. 1 qualifiers, extending his streak of starting at least one race from the No. 1 spot every year that he has contested the championship (17 years). For leading the pack, they matched with John Smith. Smith would be unable to take the tree giving Hight and the Auto Club boys a single. The tires would smoke almost immediately, and the Camaro would coast to 8.475-seconds at 82.92 mph.
In the second round, Hight would go up in tire smoke and then try to pedal the Auto Club Chevy but wouldn’t be able to get the tires to gain traction again before having to shut it off. His 6.631-second effort at 102.17 wouldn’t be enough for opponent Chad Green’s 3.987 at 320.36.
“It’s been a long weekend, painful just having to sit out there and wait when all you want to do is get out there and race.” Hight said. “Tricky conditions all weekend long with the rain but NHRA did a great job getting the track back on Saturday night and then today, making the decision to push back the start. We struggled a little but I’m not worried. Having Jimmy Prock and Chris Cunningham, opening the season with two wins and 14 of 16 runs in the 3.80s, that wasn’t a fluke. We just need to keep our heads down and work hard and try to get another streak going starting with the Four-Wide in Vegas.”
Brittany Force and the Monster Energy team, fresh off their first-round win in the Pep Boys NHRA All-Star Callout that also landed them the No. 2 qualifying position and marked the third fastest run in Top Fuel history, ran into trouble early Sunday. The Monster Energy dragster would have severe tire shake right at the hit and shut off, coasting to an 8.317-second pass at 78.33 mph that was bettered by Clay Millican’s 3.722 at 326.24.
“It was an early weekend for our Monster Energy / Flav-R-Pac team out here in Gainesville. We got beat first round and it was tough,” Force said. “We only had the one qualifying pass down the racetrack and the weather conditions had a lot to do with it. But looking at the positive side, we won round one of the All-Star Callout which will continue in Indianapolis. So, we pack up and we had to Vegas and we’ll start all over again.”
Austin Prock and the Montana Brand / Rocky Mountain Twist team would have some behind the scenes drama in their pit before heading up to their first-round match-up with Billy Torrence. Engine issues would have the team putting together a new motor in nearly record time and then hustling to make it to the starting line. The end result would be a pedalfest for the young Top Fuel standout. Prock would do his best to gain back traction before the car would drop cylinders and finally have to turn off. Prock’s 5.179-second pass at 129.02 mph would be bettered by Torrence’s 4.020 at 303.23.
“A tough, tough day today. It wasn’t the weekend this Montana Brand / Rocky Mountain Tist team wanted, but we’ve got two weeks to go back to the shop and get our stuff back together,” Prock said. “So I’m looking forward to Las Vegas. It’s going to be a long two weeks.”
The John Force Racing teams will next head to the first of two four-wide events April 01-03 for the NHRA Four-Wide Nationals at The Strip at Las Vegas Motor Speedway. It will be the fourth off 22 events in the NHRA Camping World Drag Racing Series 2022 season.