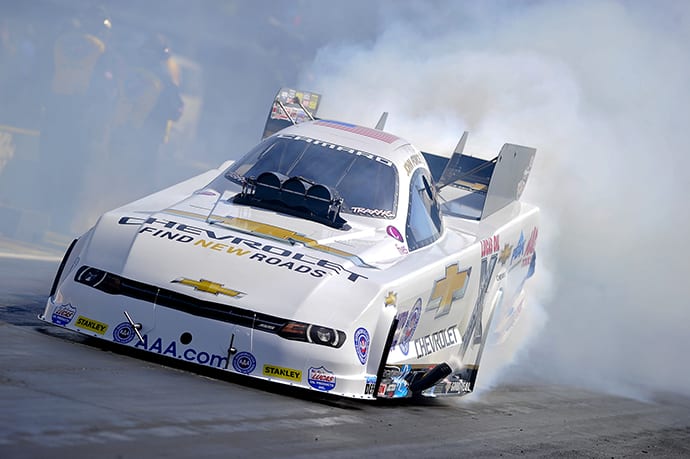 When the win light lit up for John Force for the 142nd time two weeks ago in Las Vegas the winningest driver in NHRA history didn’t want to bask in the glow of victory by himself but rather he wanted to share the spotlight with his teammate and finals partner Robert Hight. Force and Hight have been nearly inseparable the past 18 months as the pair have been working to put John Force Racing, Inc., back together again. The win, the first all Chevrolet final round since 2008, was a huge victory for Force who has put more energy into this season than any in previous memory.

“I have been working around the clock to put this company back together and show corporate America John Force can still get the job done. I have a young team and a new crew chief Jon Schaffer and they came together in Las Vegas. I wanted to build for the future not just for me but for my kids and grandkids. These guys on this team and all my teams are the future of John Force Racing,” said Force after his remarkable win in Las Vegas.

Force’s all-white Chevrolet Camaro SS Funny Car narrowly made the call for the semi-finals against Alexis DeJoria. After the warm-up the team noticed a problem that necessitated a motor swap which the young team executed in less than 30 minutes. On the way to the staging lanes the tow strap broke forcing Force’s crew to push the 2,400 pound Funny Car the length of the staging lanes in order to make the call.

“My guys did a great job on the motor swap and then to see them pushing that Chevy Funny Car up the staging lanes I don’t know if I have been prouder. Even by PR guy, Elon Werner, was out there pushing. We have always had a great team atmosphere but with new guys you want to make sure they know what we are all about. I am spending time with these young guys and they are keeping me excited,” said Force.

“You want to definitely be in the Traxxas Shootout because Traxxas is one of our major sponsors. The win in Las Vegas was big because Mark Kent the top boss from GM was at the track and I gave him the trophy. We brought on Peak and Lucas Oil last year and this was the first win for them as new sponsors but it also showed Auto Club, Mac Tools, and Traxxas that we still know how to win. Winning and safety will always be our focus at John Force Racing and I am looking forward to getting to Houston,” said Force.

Force has won the Spring Nationals six times but his last trip to the winner’s circle in Baytown was 2002 where he defeated Tommy Johnson Jr.