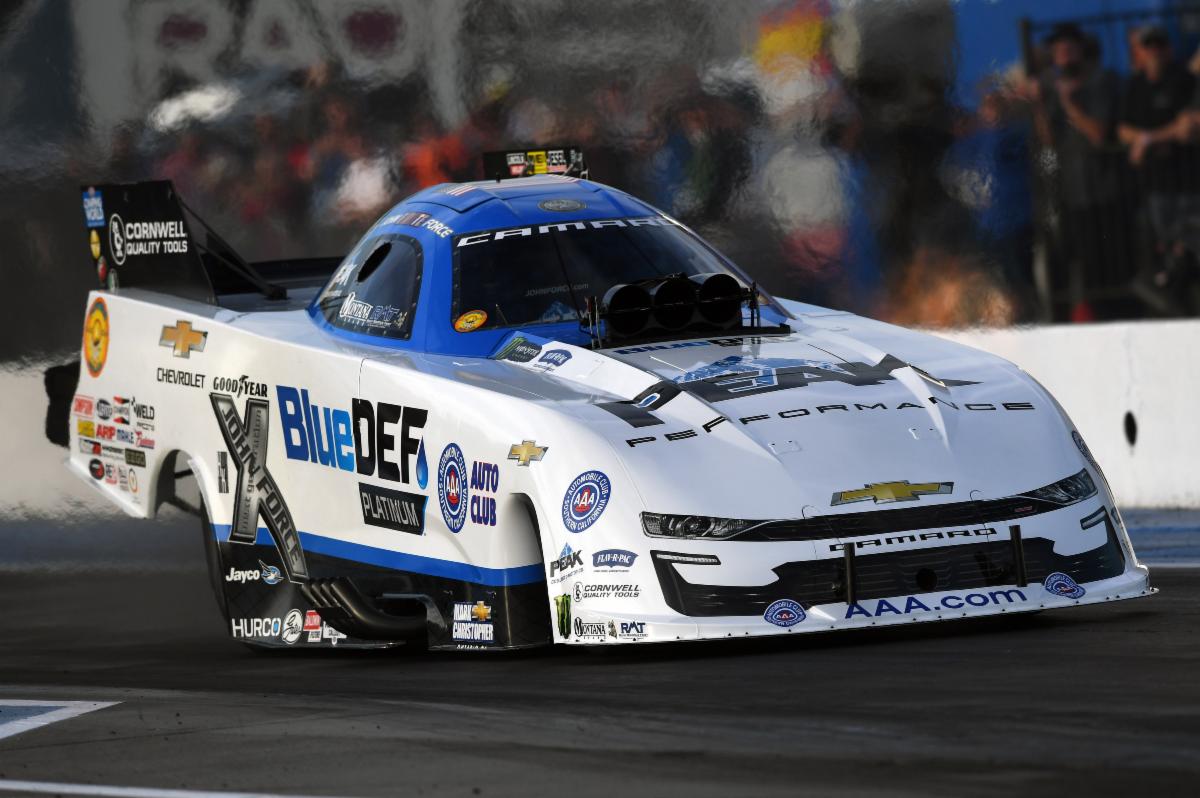 John Force and his PEAK / BlueDEF PLATINUM Chevrolet Camaro SS team will continue to build their performance heading to the historic Gainesville Raceway for the East Coast opening Amalie Motor Oil NHRA Gatornationals. The third of 22 events on the Camping World Drag Racing Series tour has historically been good to the 16-time champion.
No one has won more Funny Car races at Gainesville Raceway than Force (8). In one stretch, he reached the final round nine times in 11 years (1991-2001) and recorded a personal best when he won five straight times (1992-1996). He won the race for the first time in 1992 and most recently in 2017, a span of 25 years. He has started from the No. 1 qualifying position seven times, winning from that spot in 1992, 1995, 2001 and 2017. His other No. 1s came in 1993, 1996 and 1999.
“Getting things started on the East Coast. Always love coming out to Gainesville, the Gatornationals are a big deal, all the history. With the Hall of Fame induction, all the who’s who, they all come out. It’s a great time,” Force said. “I grew up watching these guys. Don Garlits is a legend and he’s done so much for the sport. It’s going to be something special to have all the greats out watching. The fans always come out strong here in Florida too. Going to be quite the show, hoping to get this PEAK BlueDEF Chevy in the winners circle, that’s the goal. Would be something special at the Gators.”
Force had pre-season success at testing at Wild Horse pass Motorsports Park in Arizona but stumbled at the season opening Winternationals where he qualified 16th and had a first-round exit. The PEAK / BlueDEF team turned things around back at Wild Horse Pass Motorsports Park for the NHRA Arizona Nationals. Force would qualify No. 3 and have a semifinals appearance.
“We’ve been running better. I know Danny Hood and Tim Fabrisi have been putting in the work on this BlueDEF Chevy and we’re in the game,” Force said. “It’s early still and we have plenty of time to get things going. We’ve already started, coming off a decent weekend in Phoenix. I’m just excited to be out her doing what I love. I want those wins though, to do well for myself, my fans and my sponsors. Looking forward to chasing a win this weekend.”
The Amalie Motor Oil NHRA Gatornationals at Gainesville Raceway March 11-13 begins with a single qualifying session on Friday at 5:30 p.m. Qualifying continues Saturday with sessions at noon and 2:45 p.m. Gatornationals eliminations are slated for 11 a.m. on Sunday. Television coverage begins Saturday with shows at 10 a.m. and 7 p.m. ET on FOX Sports 1 (FS1) and eliminations air Sunday at 7 p.m. ET on FS1.