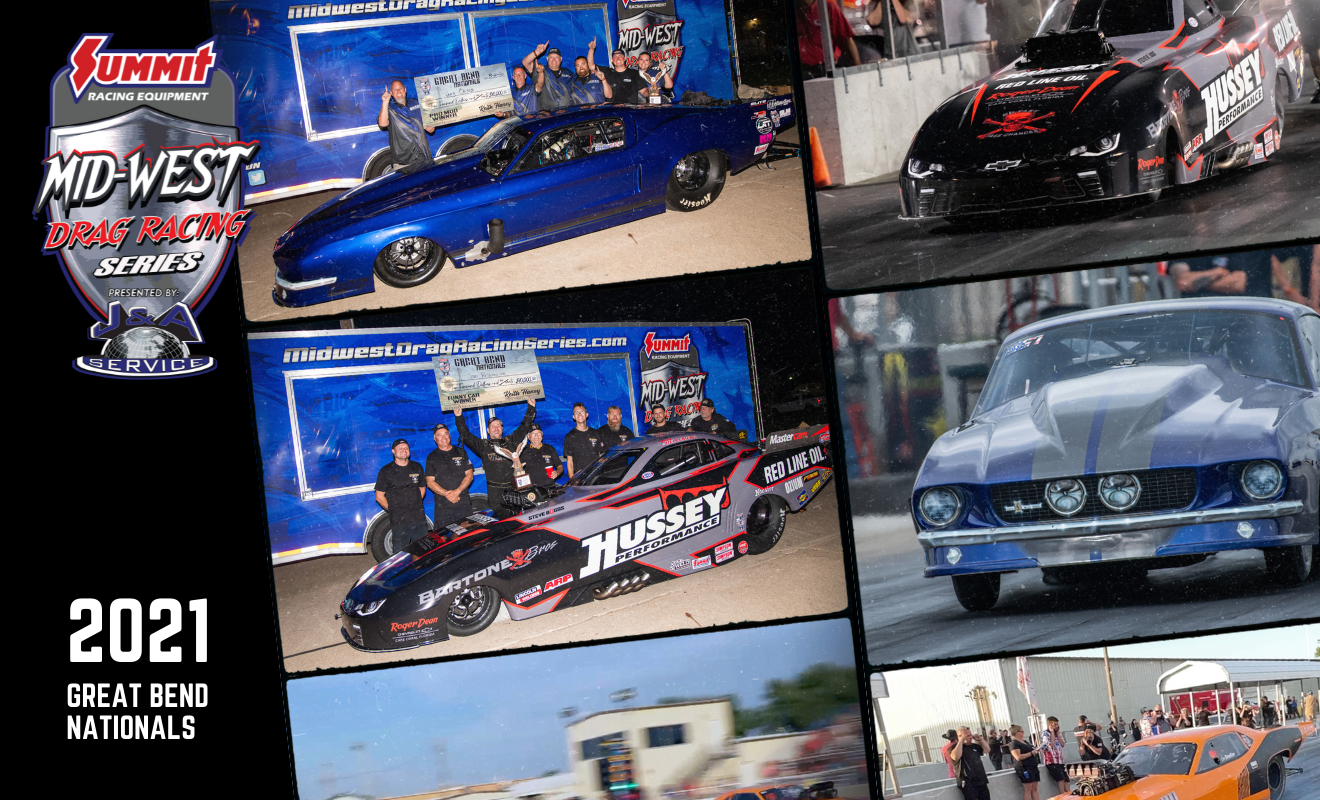 After coming close on a number of occasions in his young Pro Mod career, rising star Joey Oksas broke through for his first victory in the Summit Racing Equipment Mid-West Drag Racing Series presented by J&A Service, racing to an impressive win at the Great Bend Nationals at SRCA Dragstrip.

The weekend was certainly memorable for Oksas, who raced past Keith Haney in the Pro Mod final round, going 3.699-seconds at 214.55 mph in his turbocharged ’67 Mustang. It was the first run in the 3.60s of the weekend and came at the perfect time as Oksas picked up his first career victory in the Mid-West Drag Racing Series in his young career.

“It’s definitely unbelievable,” Oksas said. “I can’t tell you how hard this team has been working at it. We’ve gotten close a few times and to finally close the deal was awesome. (Tuner) Jeff (Pierce) made all the right calls, the team worked really well together and everyone did their jobs. It’s a tight field and there’s a lot of great cars so everything has to work out well. We just kept chipping away at it and it was just an awesome weekend.” 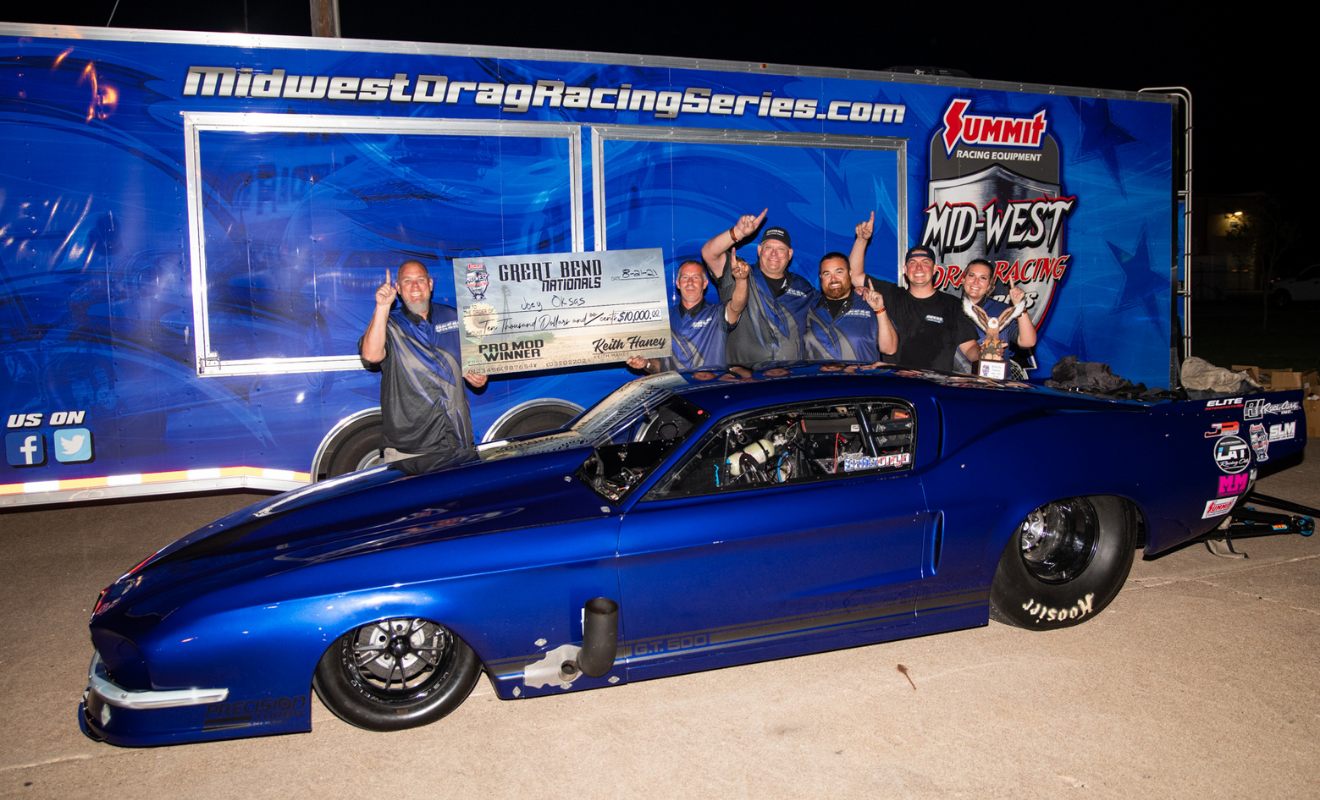 After qualifying third, Oksas and the team displayed impressive consistency on raceday, going 3.773 at 212.63 in the opening round. He followed with a 3.747 at 212.66 to beat Wayne Roberts and advance to the semifinals, where Oksas got a bye run followed Jon Stouffer’s crash. The team still put together a stout run, going 3.702 at 214.55, setting the stage for the final round duel with Haney.

Oksas left first with a .036 reaction time and dipped into the 3.60s to round out a win he won’t forget, setting the stage for what he hopes will be a memorable finish to his 2021 MWDRS season.

“We were ready to get back in the car, that’s for sure,” Oksas said. “I’m ready to keep doing what I need to do in the car and everything just keeps getting smoother every time out. We’re just looking for continued development and hopefully we can pull one of these off again. Going to a new track was a lot of fun. The place was awesome and the track was great.” 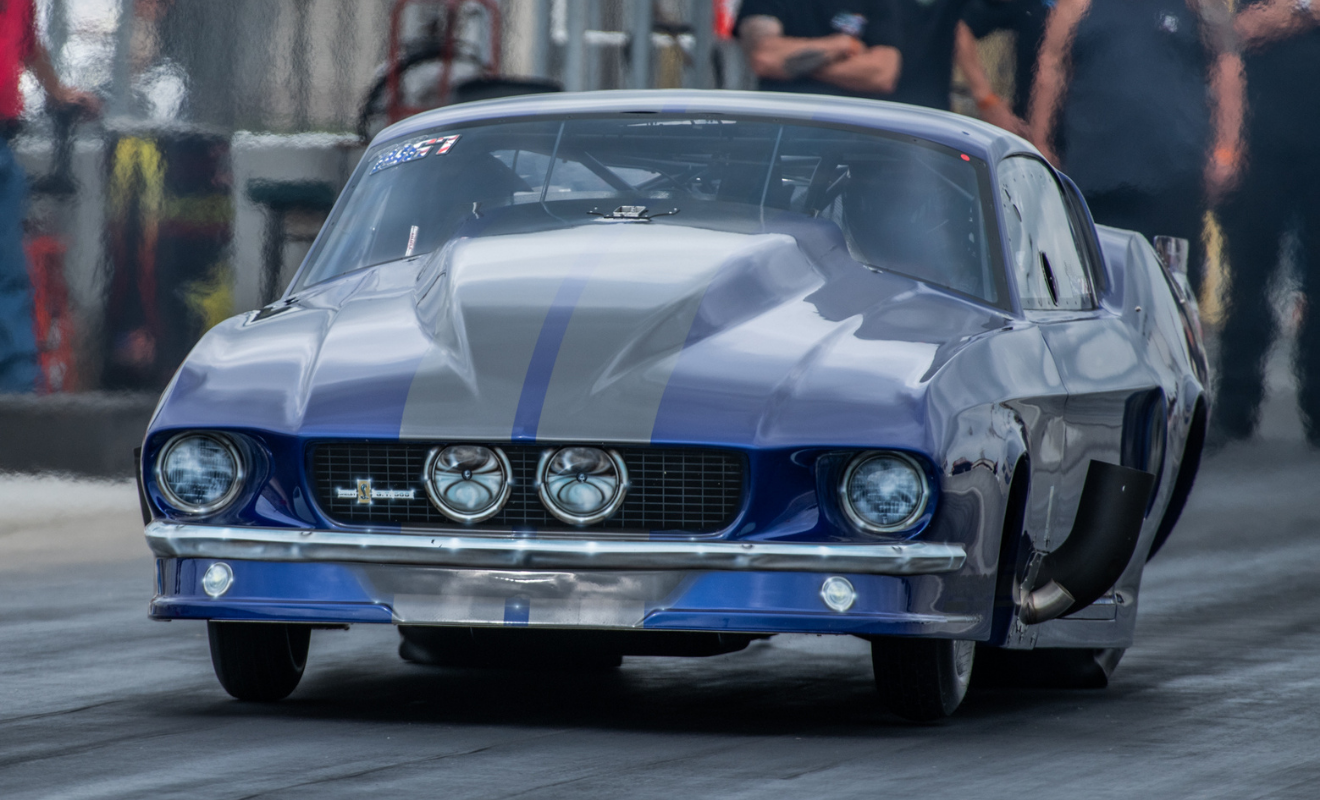 It was also the first time Bellemeur raced at SRCA Dragstrip and he put on a show, taking out Chris Marshall in a thrilling side-by-side race in the final round. Bellemeur went 3.658 at 210.05 to oust Marshall’s 3.659 at 208.97 in a terrific drag race, picking up his second victory this season.

“It’s always tough going to a track you’ve never been down, but I’m lucky to have a guy like (tuner) Steve Boggs in my corner,” Bellemeur said. “The track was absolutely phenomenal and we underestimated it a couple times. Racing Marshall, it was an awesome race. I left pretty good, Steve had it tuned up and we squeaked out a win. There were a lot of really close races and it was an awesome place. I look forward to coming back.” 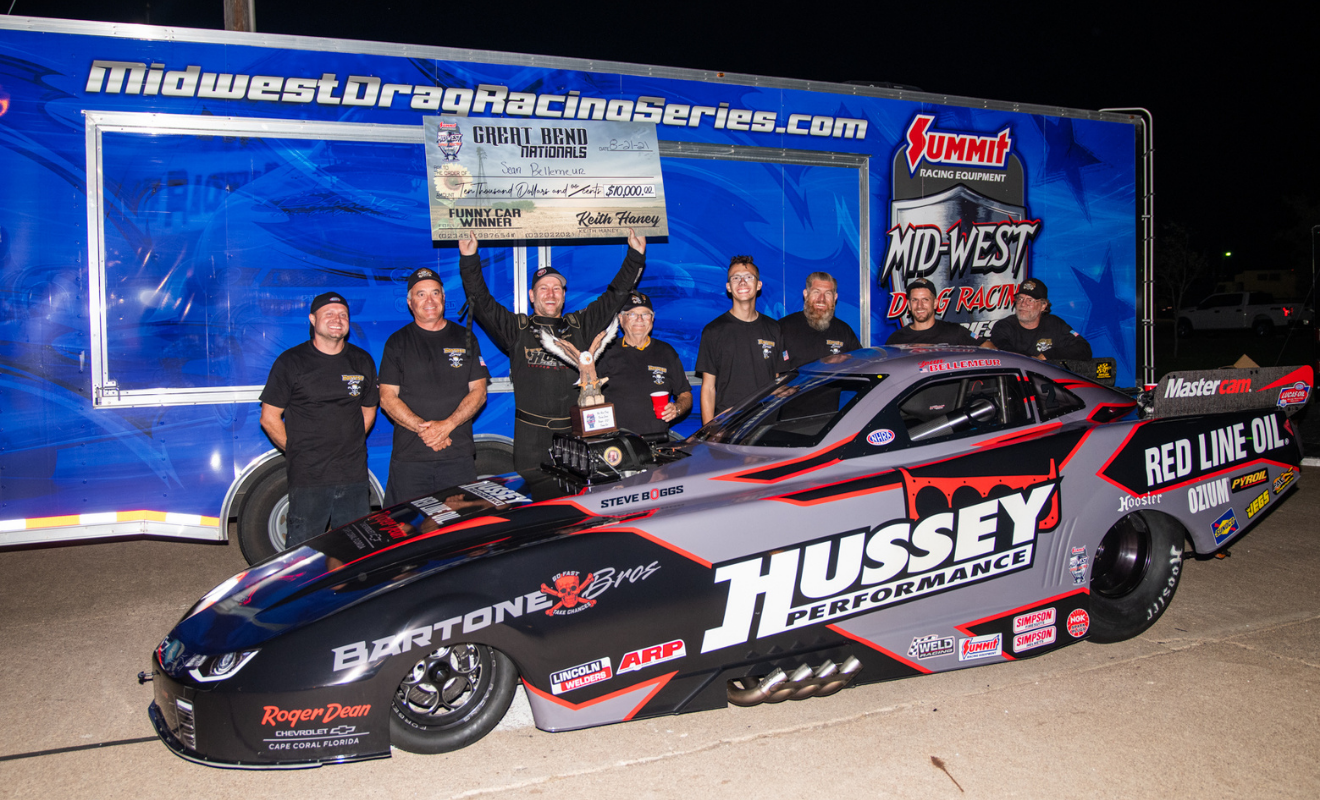 Bellemeur and his team debated sitting out the final qualifying session Saturday morning, but as conditions rapidly improved, they made the call and qualified No. 1, taking home the $1,000 top qualifier bonus with a run of 3.644 at 210.18.

After going 3.663 at 209.56 in an opening-round bye run, Bellemeur got past Annie Whiteley with a 3.843 at 189.82 to advance to the final. Bellemeur had to pedal the car a couple times that round, but everything was working against Marshall, as Bellemeur left first with a .032 light and had just enough to hold off Marshall at the finish lines.

“I pedaled it twice against Annie and we were lucky enough to get the win light there,” Bellemeur said. “We’re still learning what this car wants, but our goal is to win a championship in both the NHRA and Mid-West Drag Racing Series. We’re going to do everything we can to try and get that done.”

Keith Haney enjoyed an impressive weekend in Pro Mod, finishing as the runner up. He knocked off Jim Whiteley, who qualified No. 1 with a 3.714 at 201.40, in the semifinals on a holeshot with a 3.726 at 202.88 in his nitrous-powered “Black Mamba” Camaro. With MAVTV also on hand, Haney praised the experience at SRCA Dragstrip as MWDRS made a lasting debut at the facility.

“Hats off to everyone at the track and everyone at Mid-West Drag Racing Series,” Haney said. “Everyone did a phenomenal job, the fans loved the show and it was just a great race weekend. We gave our fans and marketing partners exactly what they needed to see this weekend. It was a great atmosphere and everyone knocked it out of the park.

In Pro Jr., Peres beat Jonathan McClain in the championship round, while Wells prevailed over Lucas Dreher in the Sportsman Jr. final.