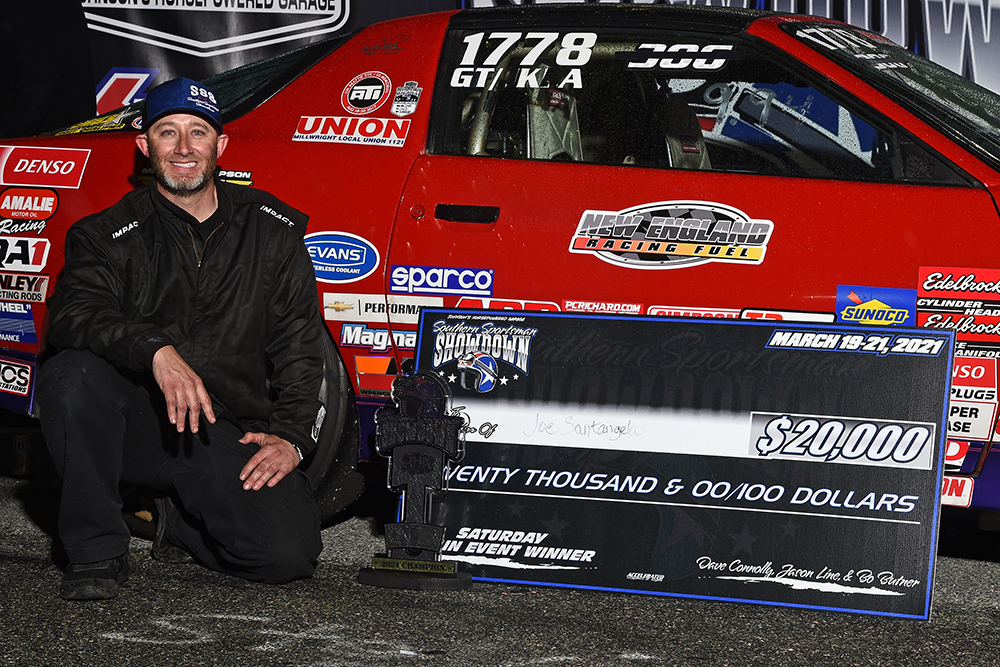 When inclement weather moved into the Sunday forecast for the  Johnson’s Horsepower Garage Southern Sportsman Showdown, the race organizers made the command decision to combine the cash prizes of the two remaining events and set up one race for Saturday in which the winner would take all.

That’s a lot of pressure for racers who thought they were going to have two chances to win the Mickey Thompson Performance Wheels and Tires $20,000 races, but for Joe Santagelo, obstacles were becoming the norm anyway in relation to the weekend, and he managed the change with both finesse and dedication to the reason he came to South Georgia Motorsports Park. He came to win, and that he did.

In the final round, second-generation racer Santangelo was a crisp .007 at the starting line and came out on the winning end of a double breakout with Michael Brand.

Next on the chopping block for Santangelo was Herbie Null, and were it not for his quick reflexes that produced a .006 reaction time, he might have fallen out of the competition. Null was dead on his 9.60 number with a 9.604, but Santangelo was able to get the win with his 9.983, 9.97. That was a crucial round, as it came with a bye run into the final on the Super Stock side of the ladder before it combined with Stock.

A 10.137 at 117.84 gave him the information he needed to log a successful finish to a weekend that started off full of stumbles.

En route to the track, Santangelo and his father had a problem with the radiator in their motor home and were the victim of another driver coming through the intersection and running into them. Traffic was terrible on the New Jersey Turnpike, and they didn’t make it into South Georgia Motorsports Park until late in the evening the night before the race was set to begin. They missed nearly a full day of testing, while other drivers had plenty of time to get warmed up – but Santangelo shook it off and got to work.

“We had a tough time, it was just wild luck, but I can’t complain right now,” said Santangelo. “It all worked out, and I had a great day.”