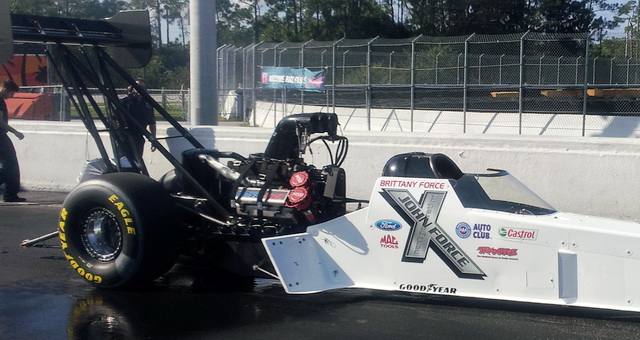 After two days of testing outside of West Palm Beach, Florida, three John Force Racing (JFR) Funny Cars and a lone Top Fuel dragster are ending 2012 with some performance momentum.

On January 10th in Yorba Linda, California, JFR will announce their 2013 Mello Yello Drag Racing Series season line-up, but for now the focus is on exploring tune-up combinations and new parts for a run at an unprecedented 18th NHRA Funny Car championship and a successful debut for Brittany Force (above) in Top Fuel. 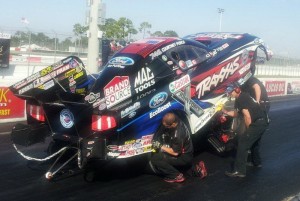 “We really aren’t looking at numbers on the scoreboard. We want to get good information for my crew chief brain trust to work on leading up to the PRO Winter Warm-Ups, January 18-19 back here (at Palm Beach International Raceway).

“All the Funny Cars have gotten down the track and Brittany is getting good experience in the Top Fuel dragster. We will be making some exciting announcements in January,” said John Force, 15-time Funny Car champion and team owner.

So far, 2012 Automobile Club Road to the Future Award winner Courtney Force has been the most consistent Funny Car. Her Traxxas Ford Mustang has posted elapsed times in the 4.08 and 4.06 second range at speeds over 317 mph.

Right behind her is father and team owner John Force whose Castrol-backed Ford Mustang has run in the 4.14, 4.09 and 4.06-seconds range. 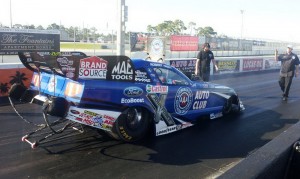 Robert Hight, the 2009 NHRA Funny Car champion, has been battling flu like symptoms the past two days while his team works on a number of different combinations for his Auto Club Ford Mustang. His Funny Car did post an impressive 4.11 second run in the afternoon on Wednesday.

Finally, rookie-to-be Brittany Force has made consistent progress behind the wheel of her Top Fuel dragster making four passes each day and getting the feel of dipping into the three-second range on a number of occasions.  Her quickest runs of 3.86 seconds and 3.89 seconds at speed over 318 mph would have been quick enough to qualify at most NHRA national events.

In addition to the John Force Racing team, Bob Tasca III in his Fordparts.com Shelby Mustang Funny Car, Bob Vandergriff in the C&J Energy Top Fuel Dragster, the US Army dragster of Tony Schumacher, Tommy Johnson Jr. behind the wheel of a DSR-backed Top Fuel dragster, and Al Anabi’s Shawn Langdon all tested.