John Force Racing has a proven track record of developing the next generation of professional drivers. Since 2005 five drivers, including all three of John Force’s daughters, have won rookie of the year honors as well as over 50 NHRA national event titles. Force has also built a legacy of creating a brain-trust of crew chiefs over the past decade. The brain-trust will continue to be led by Mike Neff, crew chief for Robert Hight’s Auto Club Camaro SS Funny Car, but the team announced promotions today that will expand the youth and depth at this position.

Starting with the promotion of Jon Schaffer to crew chief of 16-time Funny Car champion John Force’s Funny Car the 18-time Funny Car championship team will continue to be an industry leader. Previously Schaffer worked with Mike Neff as his assistant crew chief, but the 27 year-old Californian will be making the calls on Force’s PEAK Camaro SS Funny Car beginning with testing in Phoenix. Long-time crewman Tim Fabrisi will be stepping up to assist Neff on the Auto Club Camaro SS Funny Car.

“We have developed the next generation of drivers and now I want to do the same thing with our crew chiefs. We have so much young talent I want to start giving these guys a chance to grow and develop their talents. Mike Neff, Ron Douglas, Dean Antonelli, Todd Smith and Dan Hood have a lot of experience and we want to continue to grow and be competitive at a championship level. Guys like Jon Schaffer and Tim Fabrisi as well as new hires Ronnie Thompson and Nick Casertano will keep us young and on the cutting edge,” said an excited John Force. 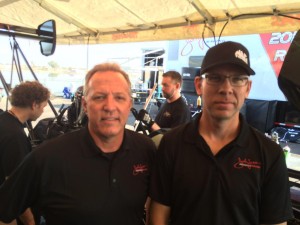 Long-time crew chief Dean “Guido” Antonelli has been promoted to General Manager of the JFR Brownsburg shop. Antonelli will continue to be an integral part of the John Force Racing crew chief brain-trust and will see his duties grow to oversee the rapidly expanding parts manufacturing operation in Brownsburg. Antonelli’s vast experience with both Top Fuel dragsters and Funny Cars will be critical to the expansion of this profit center for John Force Racing.

“We will always have a brain-trust and our lead man will be Mike Neff. You have to have stability and that is one thing that we have had over the past couple of decades. You don’t win as many championships as we have with as many different guys without a great core group. I know crew chiefs will move around. That is the nature of this business. I want to continue to develop talent inside John Force Racing and continue to keep winning,” added Force.