The  Constant Aviation Factory Stock Showdown final round closed out the 67th annual Dodge//SRT NHRA U.S. Nationals with Jesse Alexandra, of West Bend, Wisconsin, defeating point leader Aaron Stanfield in an epic final round. Alexandra has competed in the Factory Stock Showdown class for four seasons, and this is his first career win. It took five round wins today but Alexandra realized a life-long dream of winning on the NHRA’s biggest stage.

“I can’t believe it,” exclaimed Alexandra, moments after his big win. “It has been a roller coaster of ups and downs. We just had a great hot rod today. We have a great team behind us. I must thank my family and David and Ray Barton. All the guys back at the shop working hard for us. It is just crazy that it all came together today.”

In the first round Alexandra and his Chevrolet COPO Camaro defeated Mark Pawuk in his brand-new Dodge Challenger Drag Pak on the strength of a .025 reaction time that gave him a lead he never relinquished getting the finish line first with a 7.892 second, 170.36 mph run over Pawuk’s 7.973 second pass. Right after that round win Alaxandra took out Denver winner Stephen Bell with an .011 reaction time combined with a 7.922 second run was enough to advance him to the quarterfinals.

“We were chasing some bugs earlier in the weekend,” said Alexandra. “They started to get worked out as the day went on. It just all came together, and I still can’t believe it.”

Racing the Topeka national event winner and current bounty driver John Cerbone, Alexandra was able to get his third win light of the day and pick up the $1,000 bounty. He once again grabbed a starting line advantage and never gave up the lead. In the lane beside him, Cerbone had his hands full as his red and black Saw Mill Auto Camaro got loose and he scuffed the wall in a losing effort. The semifinal contest for Alexandra saw him outrun Anthony Troyer. It was a consistent 7.854 second run at 177.04 mph that set up his first career final round against Gatornationals winner Stanfield. 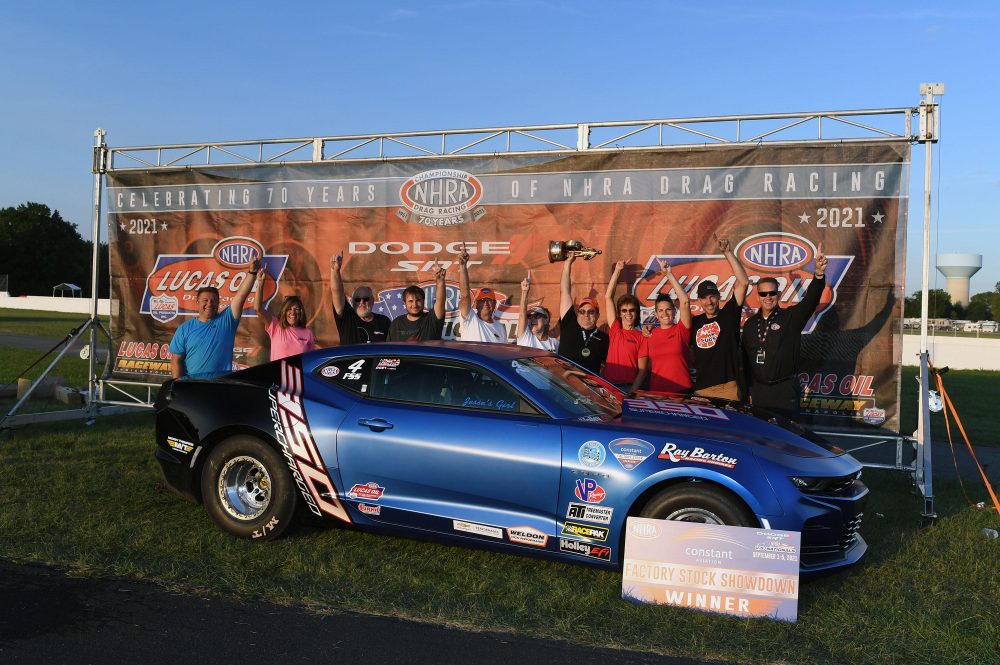 The final was over as soon as Alexandra leapt off the starting line with a .015 reaction time and Stanfield severely spun the tires of his Camaro and lost almost all momentum off the line. As Alexandra crossed the finish line 7.841 seconds later tears were already welling up in his eyes.

“I got out after the final and I almost fell on the floor,” said an emotional Alexandra. “I started crying.  It was just nuts. This has been four years chasing this Wally. I couldn’t have done it without everyone’s help. It is just crazy that I am standing here as a U.S. Nationals champion.”