As good as winning his first career NHRA Pro Mod race felt, Jeremy Ray believed he had to validate that performance this weekend at zMAX Dragway. After going a career-best 5.705 at 252.10 mph on Friday in his supercharged “Carolina Kingpin” ’63 Corvette, consider that done.

Ray ripped off a pair of blistering passes in both qualifying sessions of this weekend’s NHRA Carolina Nationals, the first of which was the fifth-best in class history. Sitting as the No. 1 qualifier in another loaded field, Ray definitively backed up his memorable winning weekend in Dallas.

“It shows everybody (the win) wasn’t a fluke. That’s the biggest thing,” Ray said. “The biggest thing was winning the race and then running really good off the trailer. The win was a big deal, but running good today topped off the win, you might say. It made the win even better.”

It’s safe to say everyone knew Ray was the real deal before today or even the win in Dallas, but he continues to make impressive strides down the stretch of his rookie season in the NHRA Pro Mod class. 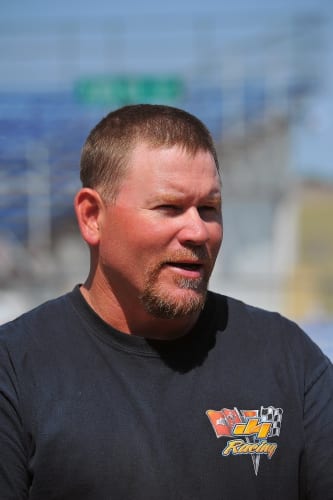 He has been locked in during the second half of the 12-race season, advancing to his first final round in Norwalk before picking up the win in Dallas. Ray has steadily moved up the points standings and now is less than 50 outside of a top-five finish, which would be an outstanding first-season finish for the tuner/driver extraordinaire.

Friday’s career-best run kept Ray as the hottest driver in the class, and he backed it up by going 5.71 at 250.83 in the second session. Ray knew he was capable of running big numbers, but the massive speed managed to surprise the talented standout.

“I knew I could run 250, but 252 is pretty good for a blown ’63 Corvette,” Ray said. “The air wasn’t spectacular by any means so the speed, that was kind of surprising for me. To put runs like that together and tuning and driving, doing the whole deal, it’s a big deal for me.”

Ray’s old-school approach definitely stands out in a class filled with specialists, but he has clearly made it work. He found something in Dallas to make another considerable leap there and that has continued thus far in Charlotte.

“Tuning the car, you learn new things at each race and I learned some really good things at Dallas with the tune-up and car set-up,” Ray said. “I didn’t know if it would relate to these conditions, but it obviously did.”

The conditions look to be even more racer-friendly on Saturday at the Charlotte-area facility and that has Ray’s attention. Racing less than two hours from home, Ray gets to perform in front of friends and family a race after winning his first NHRA race. If everything goes right he hopes to leave them with something to remember on Saturday.