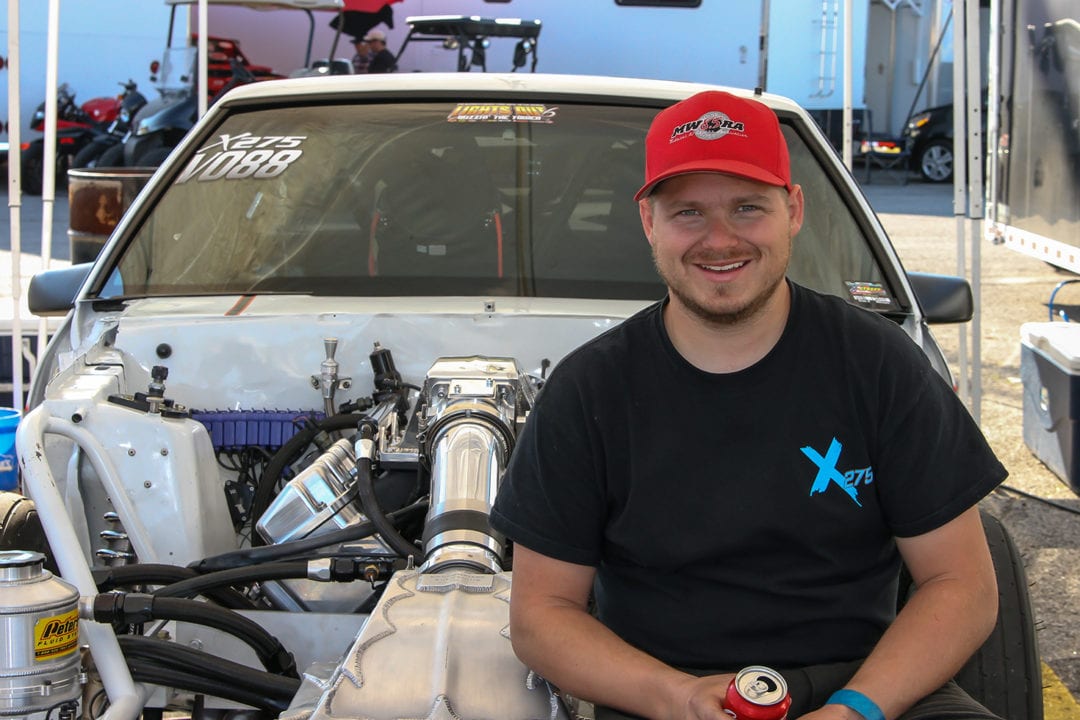 Every day since he got his driver’s license at the age of 16, current X275 elapsed time record holder Jared Johnston has relentlessly pursued his drag racing dreams. Now, after many years of looking up to the greats, Johnston is on his way to joining them.

Hailing from Raymore, Missouri, Johnston started out racing in his father Joe’s 1992 Corvette; he even won the first event he ever entered with the car at his local drag strip. Eventually, Johnston moved into NMRA Super Street Outlaw racing and also found success running Quick 8 competitions around Chicago. He then got involved with the local VAMP Racing heads-up street series and secured a championship in the 9.50 category as well multiple drag radial championships. Johnston credits fellow VAMP racer Dave Height and the Height family as having been “hugely responsible” for helping him get his successful racing career started.

In 2014, Johnston and his father had a conversation that changed the course of things to come. His 1992 Mustang, the same car that Brian Booze won the NMRA Hot Street championship with in 2002, needed a new lease on life. Pressurized Solutions was tapped for the reincarnation, and Johnston began to look into his long-term options.

“We asked ourselves, ‘Who’s the one guy that’s all about doing the most with the least, and can make any combination the fastest that it can be, the right way?’ and the answer was veteran radial racer and tuner John Kolivas,” Johnston says. “He’s always been a step of everybody.” A plan was set in motion, and Kolivas was put to work transforming Johnston’s “street car” Mustang into a fierce X275 contender.

Kolivas had teamed with engine builder and Ford specialist Jon Bennett to form KBX Xtreme Performance and the company was tasked with overseeing Johnston’s racing operation. Bennett assembled the Fox body’s 400 ci small-block Ford motor boosted by a Precision Pro Mod 85-millimeter turbocharger. Then a Turboglide 3-speed automatic transmission from Mark Micke’s M&M Transmission with a ProTorque converter was bolted onto the block. A compete Aeromotive fuel system with electric pumps can also be found onboard the car, along with an MSD Power Grid ignition control unit, BigStuff3 powertrain management system, and AMS 2000 boost controller. Menscer Motorsports shocks and struts can be found on all four corners, and a set of Mickey Thompson 275 drag radials sit out back.

Johnston boasts the car “is a freakin’ work of art,” and he couldn’t be happier with how it’s performed. “Kolivas got the car to go 4.92 right away, and we were so excited because it was the fastest the car had ever been,” Johnston recalls of their initial success. It wasn’t just that first pass, though; as Johnston had solid performances in each event he entered. He also went on to pick up an X275 class win last October at North Star Dragway in Denton, Texas.

Eventually the shine of success dimmed, and Johnston—who prides himself on his ability to cut a good light—was confronted with a heartbreaking situation early this year at the U.S. Street Nationals in Bradenton, Florida, where he made it all the way to the semi finals of X275 only to get beat on a holeshot. “That was only the second time I’d ever been treed in my life,” Johnston laments. “I was so upset at myself and it was a really sour pill to swallow on the drive back home.”

Johnston got the chance to redeem himself, however, during the Lights Out 6 event this February at South Georgia Motorsports Park. He started out with a textbook-perfect qualifying run of 4.49 at 166.48 mph which not only placed him in the number-one spot in X275, but also set the class top speed. And though the pass wasn’t quite record-setting, it was the quickest he had ever run and Johnston couldn’t believe how good it felt. “My car has a lot of promise, and that’s a testament to the guys who built it,” he says.

Johnston’s race weekend at SGMP continued to improve and he was back to cutting his usual quick lights. Johnston recalls “things were really clicking” for him that weekend, and when he lined up against Patrick Clenney he vowed not to make the same mistake he had at Bradenton. With an abundance of motivation and inspiration to get the win, Johnston did just that, crossing the traps ahead of Clenney to score the win and the also much-needed validation. “I was so excited that I wanted to cry, but I couldn’t because I was laughing and smiling so much,” he remembers of his initial feelings upon learning he’d won.

Well aware of how tough it can be to remain out front in a class with such tight competition, Johnston believes that “most of the guys out here make enough power to set records, but it’s all about who’s got the right tune up for that day and that track.” He also feels that X275 has become more of a class about setting records rather than winning races, but insists that records “do nothing” for him. His focus is on getting those win lights, although that’s not an easy task to accomplish when the rest of the field is so well prepared. “You have to have a great crew, an excellent car, and a flawless driver to be a front runner,” he explains. “If you have to do any little thing—wheelie, pedal the car, whatever—you’ll probably lose.”

The stars aligned yet again for Johnston at the inaugural Radial Tire Racing Association (RTRA) event at North Star Dragway in Denton, Texas, in early March. Johnston yet again dominated the field and secured the number one qualifier position with a 4.46 run at 161.17 mph. In the first round of eliminations, however, he did something much more important than simply picking up the win: Johnston reset the X275 ET world record. Posted on the scoreboard was confirmation that he had run quicker than anyone else: 4.44 seconds at 160.83 mph. He didn’t stop there, though; he then flew through the elimination rounds to pick up his second major event win in a row.

Ironically, despite his success and new world record, Johnston doesn’t consider himself a front runner. “We haven’t been on the circuit long enough, or paid our dues enough, to claim that,” he insists.

Not one to brag on the Internet, Johnston feels it’s important to stay humble and tries to include his family as much as possible in his racing endeavors. He acknowledges he wouldn’t be able to pursue his passion without the support of his wife, Heather, whom he met while they were both in middle school. His brother Jonathan often shares crew chief duties with Kolivas, and his niece, who is currently battling leukemia, has her name proudly emblazoned on his car’s passenger door.

Through the years Johnston’s passion for drag racing has never waned. His car has had practically every combination of power adder possible—from naturally aspirated to nitrous to blower to turbo. Now that he’s reached a level of success that most in his class can only dream about, he admits it feels a little surreal. “Some people care about celebrities, but not me. I have the utmost respect for people that have done so much for the sport of drag racing, people like John Kolivas, Joel Greathouse, Jason Lee, Don Walsh Jr., and Shane Fisher,” Johnston says. “It means so much to me to be in the game with them. It’s truly a blessing, and I ask myself every day what I’ve done so good in my life that the Lord has blessed me with an opportunity this amazing.”

With a full schedule of radial races planned for his 2015 season, it’s up to fate to determine whether or not Johnston will have more winner’s circle worthy moments—and whether he’ll be able to hang on to his ET record. No matter the outcome, though, his enthusiasm for drag racing and his love of the sport will remain steadfast and true.