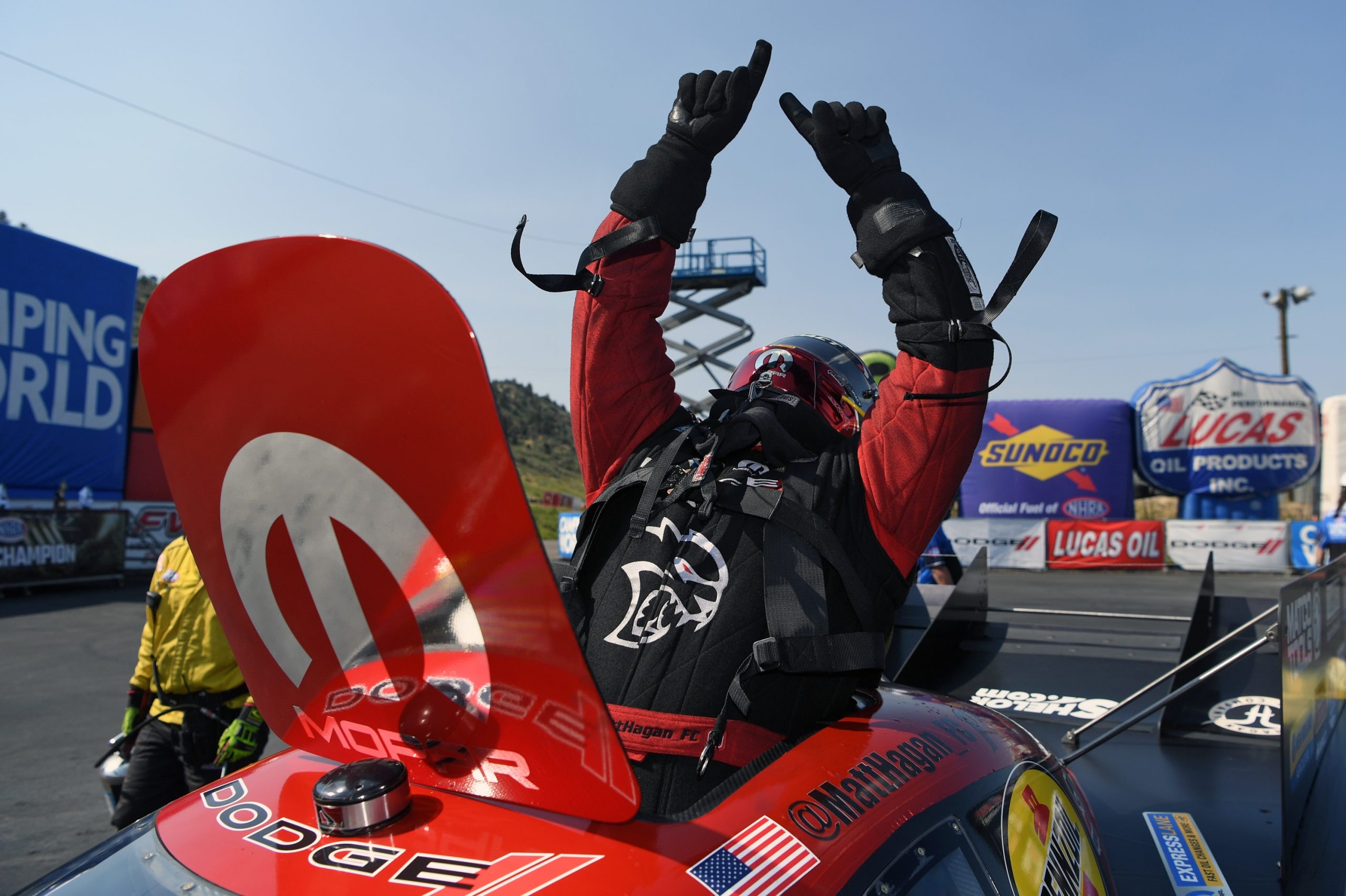 Reigning NHRA Camping World Series Funny Car champion Matt Hagan will return to competition this weekend at the NHRA Carolina Nationals in Concord, N.C. after missing two races due to COVID-19. Hagan has completed all NHRA protocols and has been cleared to suit up and strap back into his 11,000-horsepower Shelor Motor Mile Dodge Charger SRT Hellcat Redeye where he will continue his title defense.

Hagan enters the weekend ranked second in the point standings and less than one round behind the current point leader following his team’s victory last weekend at the Mopar Express Lane NHRA Nationals Presented by Pennzoil, the first of NHRA’s seven Countdown to the Championship playoff races. Hagan’s former teammate, Tommy Johnson Jr., assumed the driving responsibilities of Hagan’s machine at both the Indianapolis and Reading, Penn. events when the three-time world champ tested positive for COVID-19 ahead of the Dodge//SRT NHRA U.S. Nationals. Johnson and the Dickie Venables-led team suffered a disappointing DNQ in Indy, only to rebound in the most spectacular fashion last weekend in Reading.

The following is a Q&A with Matt Hagan:

Tell us about your experience with COVID-19.

Matt Hagan: COVID affects everyone differently, and it was something that hit me really hard. It started like the flu and then just never got better. I had several days of lying in bed with a fever, chills, and aches, and finally ended up having to check myself into the emergency room. I spent a night there receiving fluids and steroids, and they were doing everything they could do to bring my 104-degree temperature down. My breathing was really concerning to them and that’s why they kept me overnight. Once they got my oxygen up and finally got my fever down to about 101, they released me from the hospital but I still wasn’t out of the woods. It still took some time for my body to recover.

Indy would have been your 288th race. Have you ever missed a race since embarking on your professional NHRA career in 2008?

MH: No, I’ve never missed a race. I was talking to my dad about that yesterday, actually. We were saying it’s pretty crazy that I’ve been able to race for almost 15 years now and never had to miss one. I’ve always been healthy; never had a broken bone or anything, which when you think about it, I’m on the farm when I’m not at the race track. I’ve never been kicked by a cow or gotten run over by a piece of equipment. The whole experience was very humbling, and it was a very helpless feeling of not being able to do anything to change it to be there. As an athlete, mentally and physically, you’re just so used to being ready and go-go-go, and there was nothing I could do. I just had to let my body recover, and it took time and had to do its thing.

How did it feel to watch someone else driving your race car?

MH: It was very bittersweet for me watching Tommy drive my race car. He deserves so much credit. He’s such a good driver. He’s finished second in the world a few times now, and I knew he would do a great job, but when it’s your car and your team, and you’re sitting there watching as a spectator, it’s tough. I wanted to be there, but I just physically wasn’t ready. Missing those two races was the right thing to do. Obviously, I didn’t want to put anyone at risk, and even if you took that part out of the equation and it wasn’t a factor, it just wouldn’t have been fair to my team because I wouldn’t have been able to give 110 percent. Tommy’s a great driver and I’m very proud of my guys. Everyone did everything they needed to do to get as many points as possible last weekend.

The fans and everyone were really supportive. They were rooting for Tommy, and rooting for our team, and it was kind of a fairy tale with the way things working out like they did. Even getting around (Ron) Capps in that second round (during Reading eliminations) was a big move for us, points-wise, and it was close racing all day. All of the cars ran really close. It was 3.80s and 90s all day. It came down to reaction time, and Tommy doing his job in there, and he did. And, it was special because Tommy was able to dedicate that win to his dad. For him to be able to crawl back in the car and get a win like that is super special.

How did you follow along or watch the Indy and Reading races? On TV? Live timing?

MH: I had about 100 people texting me all day long. And obviously, I was following the @ShoeRacing social media channels, checking all of the round-by-round results, too, so that kept me right in the loop. But honestly, even if I never looked at social media or turned on live timing, I still would have known what was going on because my phone was going off nonstop. 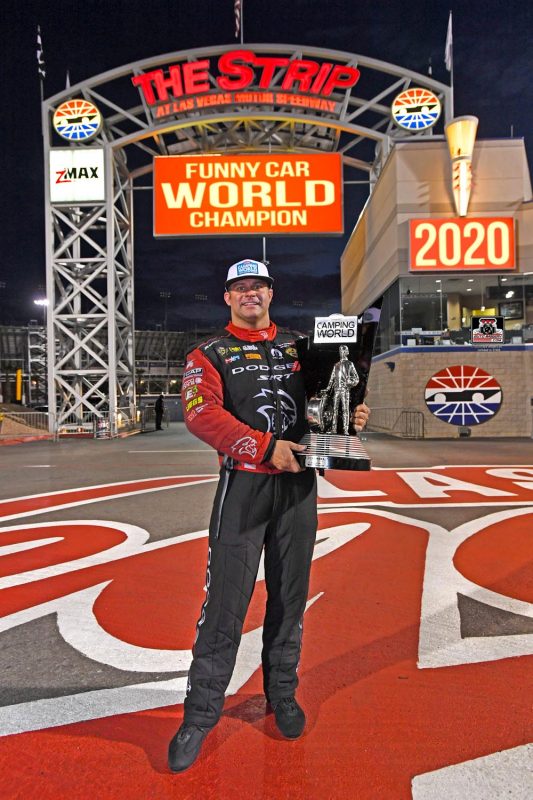 Walk us through the range of emotions you felt watching your car DNQ at Indy when you had the points lead which caused you to drop to fifth, to then watching your team come back and win the race at Reading, which put you right back in the thick of the points battle.

MH: Our guys are so good, and do such a good job. For the weather to come in at Indy, and miss out on those runs and then not make the show and miss out on all of those available points that were up for grabs, was just sickening. I was already sick, and that made me sicker on top of it. To watch that happen, and knowing it was a Dodge-sponsored race and our Dodge Funny Car wasn’t going to be racing on Sunday, whether I was in it or not, was just tough. For the guys to bounce back like that in Reading and scoop up all of those points was awesome.

And, I mean, you’ve got to look at it like the last race I was at (Brainerd) we won, and then Tommy won last weekend, so the car has won whenever it’s been able to race. Throw Indy out of the equation because that was just a fluke deal with the one qualifying session. Who knows, maybe our car could have won the last three races if we were able to run in Indy. I really feel like we’re peaking at the right time and we have six more races to go, so I’m excited. I think we have a wonderful opportunity to do big things and go back-to-back for a championship.

Did you give Tommy Johnson Jr. any pointers before either race?

MH: Let’s be honest, Tommy doesn’t need any pointers from me. He and I battled it out the last few years for a championship, and when it came down to the semifinals at the end of last year, it was going to be either me or him winning the championship. He definitely doesn’t need any pointers from me. He’s an excellent wheelman in there and does a great job keeping it in the groove, cutting good lights. There’s nothing I could have said or done, he’s a natural driver.

Not trying to get ahead of ourselves, but if you were to repeat and capture another championship this year, would you consider this to be a ‘co-championship’ with Tommy?

MH: Absolutely it would be a co-championship, especially since it was a Countdown race. Tommy put points on the board for us. I hope no one else has to go through this situation, but the team does the work and the crew chief makes the tuning calls, and they shouldn’t be short-changed because the driver gets sick and isn’t able to race. Plus, we have sponsorship obligations to fulfill. If we can pull this off, I’ll be the first one to buy Tommy a (championship) ring.

I’m curious to know your thoughts on NHRA’s new Driver Swap/COVID rule before you got COVID, to now.

MH: Every situation is different, and it doesn’t look like COVID is going away anytime in the near future, so it might be something we see more of. I think certain people might feel a certain type of way about it, not really into it or anything, until it happens to them. And then, they might be like, ‘man, I’m glad NHRA instated this new rule.’ Up until this point, it was always ‘the points go with the driver.’ So, I’m glad NHRA made that rule because I didn’t have that pressure on me like ‘I have to go racing, and if I don’t, my team could potentially lose out on a championship because of it.’ I think having that pressure just puts you in a bad situation. It comes down to safety. For me, it was a really good thing because I wanted to drive, but I wasn’t ready to drive, and this new COVID rule allowed me to take the time that I needed to get healthy and wait until I was 100% to come back.

Now that you’re healthy, what have you been doing to prepare to return to the driver’s seat?

MH: As big of a setback as this was for me, I feel 100% confident and I’m 100% ready to go racing this weekend in Charlotte. I’ve been doing cardio, lifting weights. I’m a little weaker on the weights than I’m used to, but my lung capacity has bounced right back. That was the biggest concern for me – putting on 30 pounds worth of gear, and the nitro, and the g-forces, and strapping in and not being able to breathe, and thankfully, that’s not even a concern of mine anymore. I truly feel like I’m ready to go.

You’ve been out of the seat since Brainerd, which was almost a month ago now. Do you feel behind at all knowing that all of the other championship-contending drivers enter Charlotte with two solid weeks of back-to-back racing?

MH: I don’t feel at a disadvantage at all. We’ve taken months off before. Last year we had about four months off due to COVID, and we came back and won that first race back. I feel very confident in my abilities to drive the race car and be a good leaver on the starting line. I feel excited because I know I get to crawl back into a great race car. I’ve been doing this for so many years, so the g-forces and acclimating to the speed isn’t really that big of a deal to me. I know what I’ve got to do. My guys will put a great race car underneath me and I’m confident I can get back in there and not miss a beat.