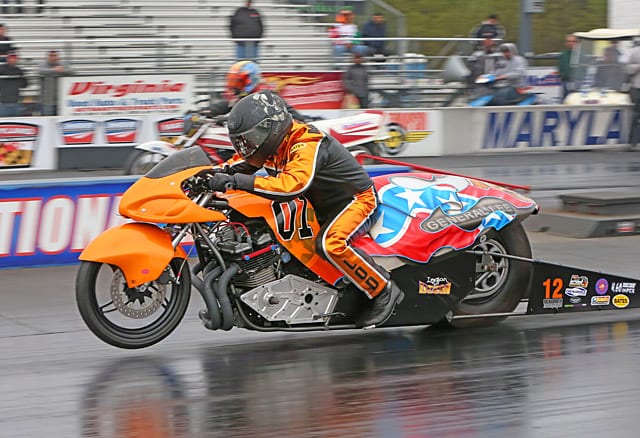 No one blazed MDIR like two-time Orient Express Pro Street champion Joey Gladstone and the DME Racing team did in April, with Gladstone recording a mind-blowing best of 6.720 at 221 mph on the Vance & Hines turbocharged Suzuki Hayabusa before breaking and ceding the win to teammate Terence Angela.

But DME will have the whole field conspiring against them this time around, including the three-bike HTP Performance stable, the Ronnie Mitchell racing team out of Detroit, YouTube sensation “Mothug” Doug Gall, and maybe even recent NHDRO winner Bud Yoder and his teammate Mark Paquette. Richard Gadson will be back on Brad Mummert’s old school, air-cooled Suzuki GS that electrified the world in April with the bike’s first ever 6 second pass, a 6.98 at 190 mph. Pro Street will be full of hungry racers looking for a piece of DME.

Multi-time DME Racing Real Street champ Jeremy Teasley didn’t have a ride for the class in April until bike owner Roger Starrette showed up Sunday morning. With one win under the team’s belt, will Starrette show up this time with bikes for himself, Tealsey and David Merks? Or will Teasley be out in the cold?

The rest of the field probably hopes that Starrette continues with his South Carolina sabbatical. Fast guys like “Super Dave” Stewart, Anibal Merced, Eddie “Who” Chapman, and even Rickey Gadson could frankly use a break from slender clutchmeister Teasley.

Long-tailed grudge beasts of all configurations crawl out of their trailers for Saturday night’s Eastside Performance Grudge session. Icons of the sports such as Bud Light Lime, Eddie Kane, Mandingo and Kingpin will take on anyone with a fat wallet and the guts to open it up.

As usual, MDIR will welcome you with the best track, the best facilities, the best concession stand, and the most hustlin’ and efficient crew. There is no better place in the world to test your bike and your skills than with the world’s largest motorcycle drag racing series at MDIR.

Find out more about Maryland International Raceway at http://www.RaceMDIR.com