The three-day event proved to be one of the most unpredictable and exciting Nitro Jam events of the season. Fans and teams overcame weather and produced the best professional and sportsman racing action in the country. Two world records were set, two drivers claimed back-to-back championships and the return of the Crower Pro Mod class gave way to a brand new IHRA champion. 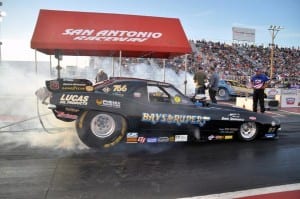 Jason Rupert and Mike McIntire Jr. topped the leader board all season long in the AMSOIL Nitro Funny Car presented by Aeromotive class. The duo won nine races between them during the 12-race season and were predominant in the point standings. Rupert and McIntire advanced to the semifinal round at the World Finals but McIntire failed to advance into the final round when number one qualifier Shawn Bowen took the win. California native, Rupert clinched the championship in his “Bays and Rupert Black Plague” Camaro and went on to win the final race of the season while setting a new ET world record. Rupert tallied five wins and three runner-up finishes in 2015.

The Pro Stock class was one of the tightest battles heading into the World Finals over the weekend. Cary Goforth and John Montecalvo were both seeking the title of IHRA World Champion heading into Memphis. Goforth and Montecalvo went up against each other in the semifinals and it was Montecalvo that secured the win. The championship came down to the final round when Montecalvo and JR Carr lined-up on the starting line. With a .027 second ET difference between them, Carr secured his first IHRA win and Goforth secured the World Championship. Goforth ended the season with two wins and two runner-up finishes.
Dina Parise locked up the IHRA Crower Pro Modified World Championship in the first round of eliminations. Bill Lutz sat second in the points and was unable to advance to the semifinals as he lost to Rueben Tetsoshvili in the first elimination round. Lutz ran a 6.856 at 183.69 mph against Tetsoshvili’s 6.433 second run at 191.24 mph. Parise and “Stella” advanced to the semifinals but lost to Billy Harper. This season marked the return of the Crower Pro Mod class to the IHRA after a lengthy absence from the series. The championship is the first for Parise in her IHRA season debut. She finished the season with two runner-up finishes in seven Pro Mod races.
Jay Turner returned to championship status and is now a four-time IHRA Nitro Harley World Champion. Turner and Tracy Kile battled it out heading into Memphis for the top spot. Kile did not advance to the semifinals allowing Turner to secure the championship in the first round of eliminations. Turner went on to win the World Finals and claim his fifth win of the 2015 season. In addition, the 2015 World Champion broke the Nitro Harley ET world record on his final pass.
The IHRA Jet Dragster World Championship was decided at the San Antonio Nationals two weeks ago. 2014 IHRA Champion Elaine Larsen added championship number two to her portfolio by winning four races and posting five runner-up finishes in 2015.