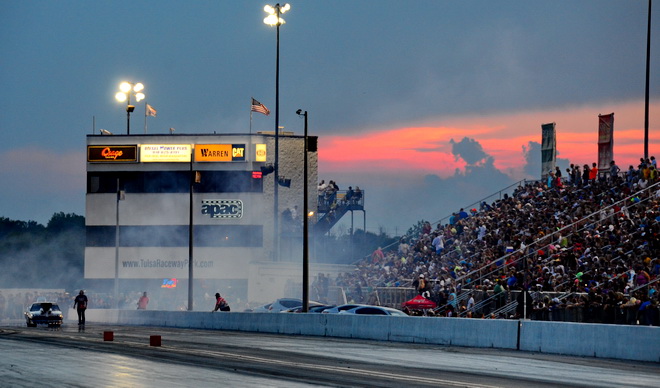 In front of its biggest crowd of the year, the Professional Drag Racers Association (PDRA) held its inaugural Under the Lights event at Osage Casino Tulsa Raceway Park (TRP). 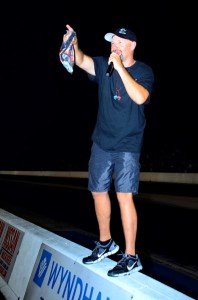 “We couldn’t be happier with the PDRA’s debut here,” said track co-owner Todd Martin, who estimated two-day attendance at more than 25,000 fans. Though the race began at 6 p.m. Saturday evening to beat the heat of a typical Oklahoma summertime, five hours later there remained lines of cars stretching a mile in either direction waiting to enter the TRP property. At 2:40 a.m., the final pair of cars went down the TRP eighth mile to close out the landmark event.

“We had a great crowd, full of families and people just wanting to have a good time and I think we delivered on that,” Martin said. “And the staff and racers of the PDRA put on an excellent show. I think they (PDRA) were a little concerned about how many cars would make the trip out here, but we had about 160 total entries, which is very much in line with what’s been showing up at the previous races. Really, I don’t think it could’ve gone much better, to be honest.” 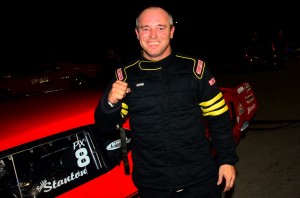 After qualifying his supercharged 1969 Camaro second behind teammate Jason Scruggs, who set a new track record with a 3.570-seconds qualifying blast at 214.79 mph, Bubba Stanton beat Tommy D’Aprile, Frankie Taylor and Kuwaiti racer Turky Alhumidi to reach Badir Ahli of Dubai in the final round.

Ahli, meanwhile, started from the 13th position in the 16-car field and raced through Terry Leggett, Mike Recchia and Scruggs, whose ’63 Corvette faltered and shut off in the semis while Ahli’s ’69 Camaro also sustained engine damage with a burned piston. His NAS Racing team, led by veteran crew chiefs Al Billes and Bob Newberry made quick repairs, though, allowing Ahli to keep his final-round appointment.

“This is awesome, our third win this year. We worked our butts off this weekend, but the car was flawless all weekend,” he added about his Jerry Bickel-built ride. However, a damaged engine during the second qualifying session in the wee hours of Saturday morning forced a last-minute swap that saw Stanton and his crew members buttoning up the new powerplant near 6 a.m. on race day.

“I can’t thank (team owner) Roger Henson and Jason and Mitchell (Scruggs) and all my guys enough. I couldn’t have a better group of guys to help me,” the Potts Camp, MS-based driver said. “I’ve struggled some the last couple of years, but this has been my best year of racing ever and I owe it all to those guys. I couldn’t ask for no better.” 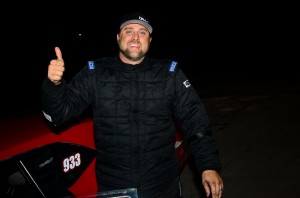 Visibly shaken upon exiting his ’68 Firebird after defeating Tommy Franklin in the Pro Nitrous final with a 3.867-seconds pass at 172.45 mph, Jason Harris admitted he overdrove his car when it got a little out of shape near the top end of his run.

“I had my hands full. I about wrecked it, but you get in race mode and it makes you do dumb things sometimes,” he flatly stated. “It got over on the centerline there and I threw the chutes out and it saved it, but I shouldn’t have done that. I’ve been in a couple of wrecks before and I sure don’t want to do that again. That was probably one of the dumber things I’ve done this year, but God was with me and fortunately it worked out alright.”

The Pittsboro, NC, native started from the third qualifying position and beat Jeff Naiser, Ron Muenks and Lizzy Musi in the semis with a run that was spitting out red-hot parts and pieces from his engine’s right-side headers.

“We tuned it up for that run,” Harris said of the 3.804 at 195.22 that set low ET in the class for the weekend. “Lizzy’s got a fast hot rod and she’s a tough driver–she treed me–but yeah, we hurt one piston on that run but fixed it up and the car was as good as it’s ever been for the final; it just got a little out of shape is all.” 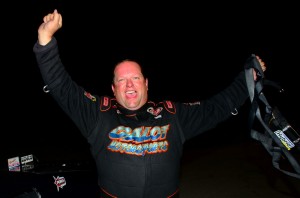 Todd Tutterow seemed destined to prevail at Tulsa in the PDRA’s new Pro Boost class after qualifying number one with a 3.853 at 191.19 mph in his supercharged ’69 Camaro, then running low ET in each round of eliminations, including a new official class record 3.823 at 191.95 in the semis.

But in the end it was Tutterow’s GALOT Motorsports teammate Kevin Rivenbark hoisting the trophy for the second-straight time after also winning at Richmond, VA, a month earlier.

“I’m super happy to get the win, but this also really helps me in the points,” said Rivenbark, who’s chasing Tutterow for the inaugural Pro Boost championship. “I’m just happy it was an all-GALOT final, though, and hopefully these next two races (at Rockingham, NC, and Richmond again) will be the same.”

Rivenbark started right behind Tutterow on the qualifying list at Tulsa, then drove his blown ’67 Mustang past Randy Bryan, Jeremy Ray and NHRA Pro Mod regular Mike Knowles in his PDRA debut. “Todd was definitely my toughest opponent, but that semi-final against Knowles was a pretty good race, too. He ran a .88 and I had a .86, but he treed me so it was pretty close,” Rivenbark pointed out about the eighth-thousandths-of-a-second margin of victory that sent him to the final.

Tutterow, meanwhile, got quicker with each successive pass on race day, going 3.869 in a first-round solo pass, then 3.831 to beat Joe Baker and the 3.82 against Tylor Miller in the semis.

“My car rolled in and lit both (staging) bulbs against Todd and I thought, ‘Oh no, he’s gonna’ make me wait now,’” Rivenbark said. “But he didn’t and we just left. I think he shook and I ran the fastest I’ve been all weekend, but like I said, I’m just glad both of our cars were in the final.” 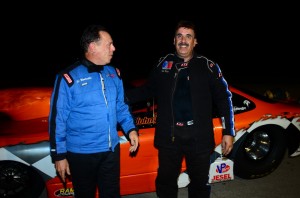 If not for his final-round opponent, Commack, NY’s John Pluchino would not even have been in Tulsa to pick up his second Extreme Pro Stock win of the year.

“I’m having trouble with my truck and trailer so we weren’t even going to come here, but John Montecalvo, he offered to bring my car down here in his trailer and we worked out of a tent in the pits and we ended up running him in the final,” Pluchino explained. “But that’s the best scenario that could be–especially since I won!”

Montecalvo, from Center Moriches, NY, started from the number-one slot after a 4.103 qualifying run, with Cary Goforth second and Pluchino third in the eight-car field. In the opening round of eliminations, Pluchino beat Goforth’s father, Dean, then took out the son in the semis while Montecalvo went through Lester Cooper and Cale Aronson to reach the final.

“This is great, but I wouldn’t even be here if it wasn’t for John; he’s an awesome guy,” Pluchino stressed as Montecalvo arrived to congratulate him after both exited their cars. “We’ve been doing this together and racing each other for more than 20 years now, but for him to help me get down here is just awesome.”

“I just don’t know how you’re going to get home now,” Montecalvo answered. 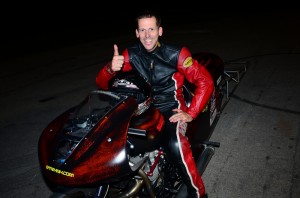 It had been quite some time since Pro Extreme Motorcycle rider and former class champion Ashley Owens last visited victory lane with his 2010 Suzuki, but the Decatur, AL-based rider found his way there in Tulsa after a final-round win over teammate Eric McKinney.

“I’m kind of disappointed with the .10 because I thought it would’ve repeated the .06 it ran the run before, but I’ll take it any way I can get it, I guess,” Owens said upon arriving alone at the TRP turnoff following a 4.107-seconds ride at 173.94 mph.

McKinney, who won four of the five previous PDRA race crowns, qualified number one and beat Jeff House and Travis Davis in the preliminaries, but his 2012 Suzuki broke upon launching for the final round. Owens started from the number-two slot and took down Mark Rendeluk and Terry Schweigert to reach the final.

“I’m not real happy with my bike’s performance here, but I am glad we got both bikes in the final, something we hadn’t been able to do before,” Owens said. “Hopefully that’s going to change.”

Top Sportsman driver Aaron Glaser made a career-first three-second pass at the previous PDRA race a month earlier in Richmond, VA, but stepped it up at Tulsa with a new elapsed time record of 3.981 seconds in qualifying first for the PDRA Under the Lights event. Glaser made it official with an impressive 3.99-seconds back-up pass in the heat of the day during the third and final round of qualifying Aug. 16, before elimination rounds began that evening.

Glaser lost to a near-perfect run by Bob Gulitti in round two, however, while Dylan Stott of Columbus, NC, survived from the 13th and last place on the qualifying list to win his second PDRA trophy of the year. 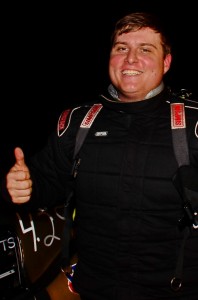 Stott caught a break in round one when Barry Daniluk went red by -.007 after Stott dialed in at 4.32, but broke out with a 4.29 in his ’67 Mustang. He stuck with that 4.29 as his dial in for the next three rounds, however, and beat Bruce Thrift and Darrell Reid before taking on number-six starter Billy Albert and his ’69 Camaro in the final.

In Top Dragster, local racer Cody Moore from Collinsville, OK, also lasted from the final qualifying spot to beat Laramie Reid of Iowa Park, TX, for the Under the Lights trophy. Moore and Reid left with identical .016 lights in the final, but Moore’s 4.287 at 163.08-mph combo on a 4.27 dial in got the job done while Reid broke out with a 4.115 against a 4.15 dial in.

With its inaugural eight-race schedule winding down, the PDRA returns to action Sept. 4-7, when it visits North Carolina’s historic Rockingham Dragway for the second time this year, then makes a return visit to Virginia Motorsports Park Oct. 10-11, for its season ender.