It’s been just two races behind the wheel for Todd Hoerner as he substitutes for Dean Goforth in his mountain-motored Pro Stock entry, but the Lynchburg, Virginia-based driver has already felt the highs and lows of drag racing this year.

With Goforth continuing to recover from a nagging foot injury, Hoerner got the call to fill in for the IHRA season opener in mid-March at Southwestern International Raceway in Tucson, Arizona, where he promptly qualified number one and made it all the way to the final round against his new teammate and Goforth’s son, Cary. So far, so good—great even—but unfortunately for Hoerner the low would soon follow.

Hoerner actually got away first in the final with a sizable holeshot, but it was Goforth, a two-time ADRL Extreme Pro Stock world champion, who streaked to the win with his Jerry Haas-built, Sonny’s Racing Engines-equipped 2013 Camaro, as Hoerner’s near-identical machine (above) got out of shape not long after launching from the left lane. 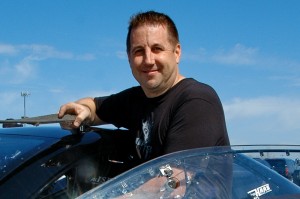 “The car started drifting towards the wall and then when I made the three-four gear change, it kind of spun the tire just a little bit so I clutched it and let off the gas and I just turned the wheel a little bit and then the car just took off. And then it was just like I was on a skating rink,” Hoerner describes.

Unfortunately the car did end up against the right guardwall, marking Hoerner’s first crash in more than 30 years of racing. Fortunately, however, he was uninjured and the car sustained mostly cosmetic damage along its right-side fenders and door. Still, Hoerner was left mystified about what went wrong.

It wasn’t until poring over electronic data from the doomed pass later that night that he noticed a strange reading from the right, front suspension. Just four-tenths into the run the graph line for the travel sensor that shows how far the A-arm drops went “clean off the top of the page,” Hoerner says. 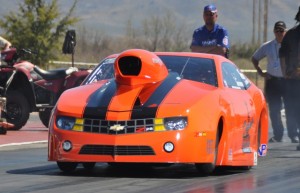 “What that tells you is the nut on the bottom of the A-arm broke or came off, so basically the second I dumped the clutch on that run, I had no more control on my right side. When I let off the gas at about three seconds into the run the right front wheel had nothing holding it on other than just the strut,” he explains. “So when I put weight on it, that’s what made the car dart because it just bowed out the right tire and got it started swerving back and forth.

“Then at the end there, from not having an A-arm, it popped the right tire, knocked it off the rim, and when I cranked it to the left there to try to miss the wall at the very end, it just smacked the wall a little bit and that was the end of the day.”

Upon seeing the data, Hoerner and new Goforth Racing crew chief Jeff Dobbins carefully reviewed video of the run and actually could see the A-arm bouncing along beneath the car. “I don’t care if you were driving or John Force was driving, that car was crashing,” Hoerner recalls Dobbins saying to him. “So that made me feel a little better to know it wasn’t really the driver’s fault.”

With just one week between the Tucson event and the IHRA’s next race at San Antonio, Texas, Hoerner again got the call to sub for Dean Goforth. But with the Camaro sent for repairs to the Haas shop in Fenton, Missouri, he instead drove the 2009 Pontiac GXP campaigned by Cary Goforth until late last year. 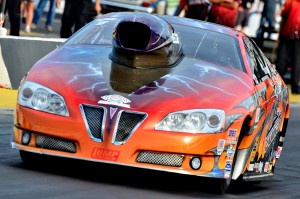 This time Hoerner qualified fourth behind Goforth’s number-one start and made it to the semis while Goforth finished runner-up to John DeFlorian in the final.

“The GXP is a good car, too. The Goforths have the best equipment, as good as anybody out here, and with Jeff (Dobbins) making the calls I couldn’t ask for a better situation while the Camaro gets fixed,” Hoerner says. “I just want to thank the whole team for all their hard work and the Goforths for giving me the opportunity to race with them until Dean makes it back.”

After selling his own Extreme Pro Stock car last year, Hoerner will return in the Goforth Racing GXP this weekend (Apr. 4-6), making the transition from the IHRA’s quarter-mile distance to eighth-mile competition as the Professional Drag Racers Association (PDRA) holds its inaugural event at Rockingham Dragway in North Carolina.