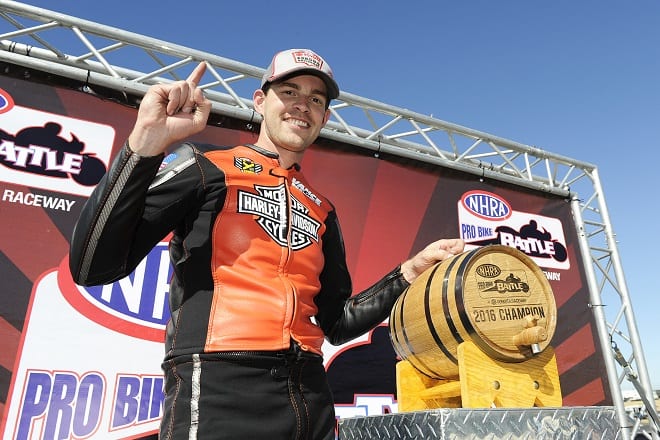 Hines on his Screamin’ Eagle Vance & Hines Harley-Davidson defeated Hector Arana, Jr., Matt Smith and his teammate Krawiec for the win. This was a rematch of the final in 2015 when Hines was defeated by his teammate. This year, Hines was victorious with a winning run of 6.755 seconds at 197.31 mph to the trailing run by Krawiec of 6.811 at 195.73.

“The guys did a great job giving me a V-Rod strong enough to go out there and give me a chance to win that final round,” Hines said. “I popped that clutch and saw Eddie’s bulb go off first and I thought I was done because we can see a hundredths of a second on the tree but big congrats for everybody doing a great job out here.”

In Top Fuel, no one was able to best the national record E.T. that Torrence ran on Friday. He earned his eighth No. 1 qualifying position of the season with the run of 3.671 at 325.69. Torrence, behind the wheel of his Capco Contractors/Torrence Racing dragster has been the quickest Top Fuel car in the last eight qualifying sessions and 11 of the last 12. He will race Steve Haddock on Sunday.

“Hats off to my team and that is what has put me there,” said Torrence. “Those guys are the Mack truck and I’m just the 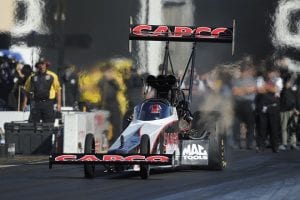 little bulldog on the hood is how I feel. I’m sitting in that thing and riding it down through there and you see 67 or you see 331 and it is unbelievable. I may be dreaming, but don’t pinch me, don’t touch me, I don’t want to wake up.”

Top Fuel points leader Antron Brown, who has three wins on the season in his Matco dragster, rocketed to the second qualifying position in the final session with a run of 3.710 at 323.27 and will be matched up with Terry McMillen on Sunday. Tony Schumacher who won the first race of the Western Swing qualified eighth and will face Leah Pritchett when racing begins.

“Today was warmer than last night and yesterday so Q3 we didn’t get down the track and adjusted for it,” said Worsham. “Q4 we adjusted and ran a pretty good run so I feel good about tomorrow.”

Worsham, the defending Funny Car world champion, has raced to two final round appearances this season but has yet to win. His team surged at the end of last season in his title run and is seeking the same results this season.

“Around March or April we started making adjustments on the car working with Toyota and their aerodynamics people and all their engineers,” Worsham continued. 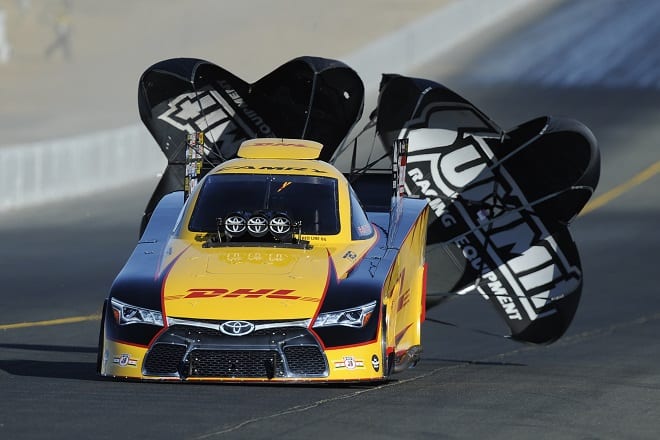 “Also our people at Kalitta and we definitely have a faster car than we had a couple of months ago.”

Funny Car points leader Ron Capps, who is racing at his home track qualified fifth and will face Cruz Pedregon in a first round matchup. Courtney Force qualified second with a run of 3.871 at 323.97 and will race Gary Densham. John Force, the most recent national event winner, will face Alexis DeJoria on Sunday.

Butner in his Summit Racing Equipment Chevy Camaro earned the No. 1 qualifying position with his run of 6.553 at 210.28 he posted on Friday. This is his second top qualifying spot of the season and he will face Joey Grose in the first round of eliminations. 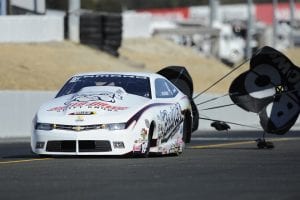 “I’ve had a fast car all year and that hasn’t been a surprise,” said Butner. “We put four good runs together and everybody was closer today than I thought they would be. It was pretty close but we made four good runs which is hard for me to do. The team is great and they powered us right to the top.”

Pro Stock points leader and his teammate at KB Racing Jason Line qualified a season low 8th with his pass of 6.594 at 209.62. He will race Drew Skillman in the first round on Sunday.

“I’ve always loved coming to Sonoma, great fans, great support and not to mention great racing,” Krawiec stated. “This track being close to sea level makes good runs. What it comes down to is, I just feel very comfortable and relaxed.” 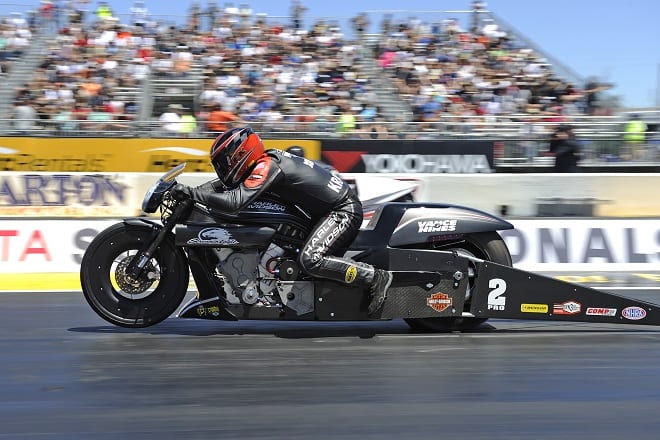 Krawiec and his teammate Hines became the first two Pro Stock Motorcycle racers to clinch their position in the NHRA Mello Yello Drag Racing Series Countdown to the Championship on Friday during qualifying.

Eliminations begin on Sunday at 11 a.m. at Sonoma Raceway.