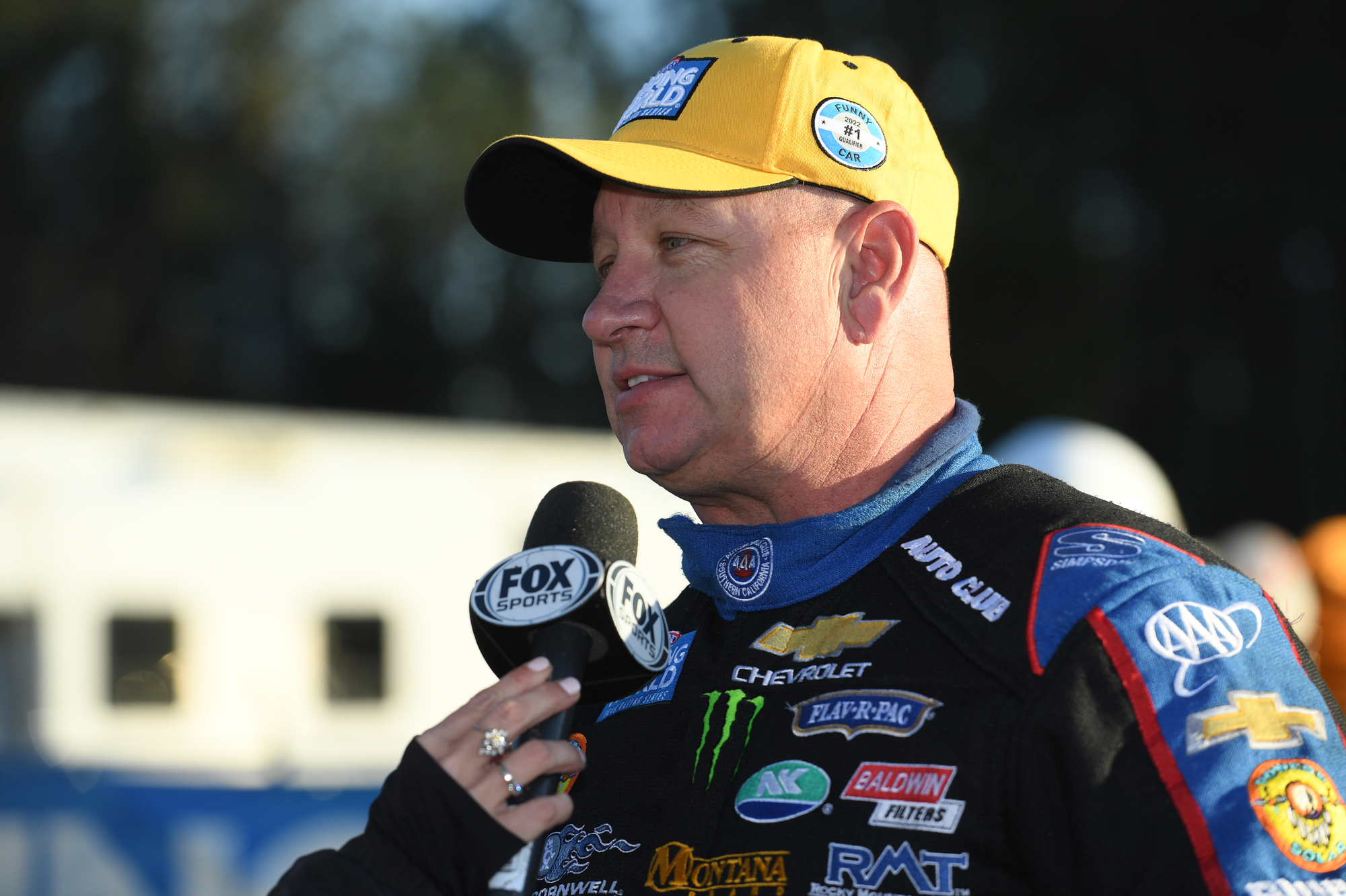 In the lone qualifying session of the weekend, Hight impressed once again with a run of 3.831-seconds at 333.41 mph in his 11,000-horsepower Auto Club Chevrolet Camaro SS, picking up his first No. 1 qualifier of the season and the 72nd in his career. After picking up wins at the first two races of the year, Hight will try to remain perfect on Sunday in Gainesville, opening the first round of eliminations against John Smith.

“Honestly, I wasn’t expecting to be No. 1,” Hight said. “We just needed to make a good run, so we have a solid baseline for tomorrow. Tomorrow, we’ll have to pick it up a little bit but when we do that, it’s going to run even better. This thing is amazing – 14 out of 15 runs it’s gone in the 3.80s. Good job to the Auto Club team but really who deserves an ‘atta boy’ is NHRA. What they did after all the rain that has fallen on this thing after all these days and the rubber coming off, and to get the track where you could run a Funny Car 3.83 is pretty amazing.” 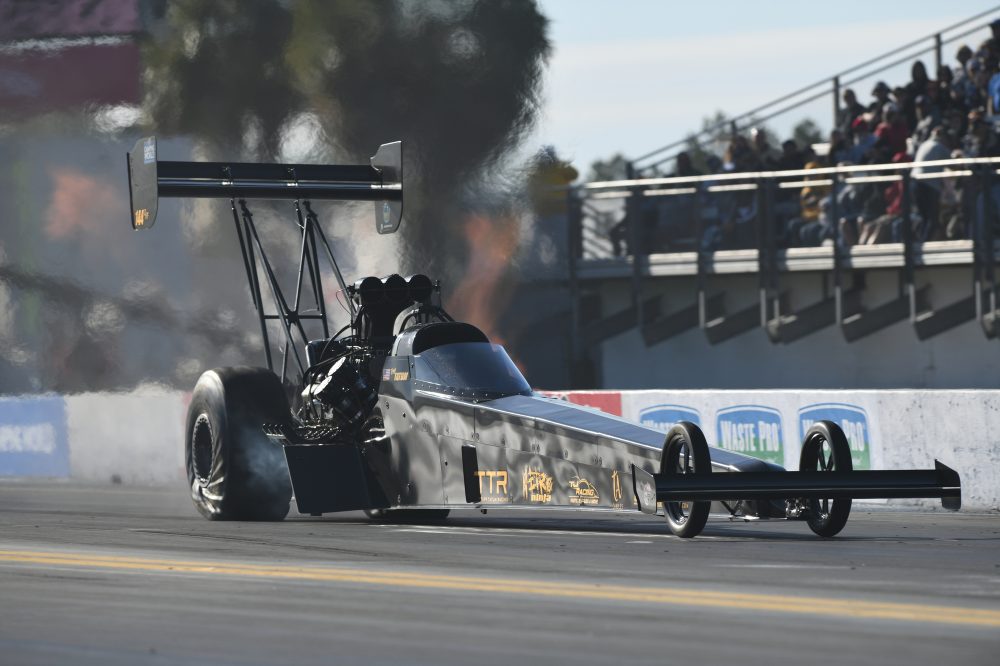 In Top Fuel, Tatum earned his first career No. 1 qualifier in his 11,000-horsepower Tripp Tatum Racing dragster, making the quickest run in track history with a stellar run of 3.674 at 331.53. It was an incredible display for Tatum, who earned the No. 1 spot in just his 12th career start. He opens eliminations against Lex Joon with the opportunity to pick up his first victory after setting a track record at a historic facility.

“It definitely hasn’t set in yet,” Tatum said. “For me it’s just a whirlwind. Me and the guys were talking about slowing it down and just getting down the track with conditions being as they are and not really knowing the track. Safety Safari doing what they did is just amazing, and the racetrack ended up being far better than we thought it would be. In my mind, I thought we were just going to slide the car down there and try for an upper .70 and when I left the starting line I thought, ‘This thing’s kind of running good.’ It went down there pretty good.”

Force broke the track speed record during her first-round win in the Pep Boys NHRA Top Fuel All-Star Callout, knocking off Antron Brown with a run of 3.684 at 337.75 to also qualify second. By making the quickest run in the opening round, Force will have her choice of opponent in the semifinals in the specialty race. Torrence, who was the top seed Pep Boys NHRA Top Fuel All-Star Callout, went 3.697 at 329.50 to knock off Leah Pruett. The run also gave him the third spot in qualifying. Justin Ashley’s 3.722 at 330.96 gave him the win over Doug Kalitta to round out the first-round winners. 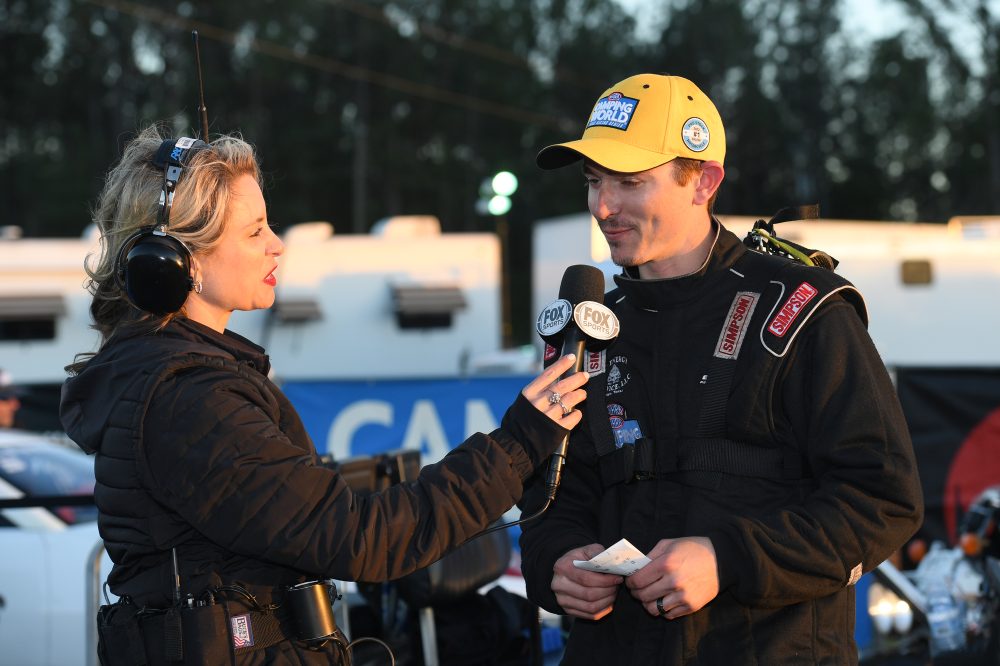 In Pro Stock, Stanfield finished off the record-breaking day by making the quickest run in the history of electronic fuel injection in the class, going a remarkable 6.468 at 211.66 in his Janac Brothers Chevrolet Camaro, also setting the track record. It gave Stanfield, the points leader, his second career No. 1 qualifier and another standout run in a year that has already included a win and a pair of final rounds. He’ll open eliminations against Stefan Ernryd looking for a second straight victory.

“It was awesome,” said Stanfield. “I’m sure the crew chiefs were a little nervous up there. We had some really good weather conditions, and I had all the conference in the world in my team.”

Pro Stock Motorcycle, which is making its 2022 season debut in Gainesville, could not complete qualifying due to weather on Saturday. Eliminations will be based on points from last season and Smith, who is the defending world champ and won in Gainesville in 2021, will start raceday from the No. 1 position.

Eliminations for the Amalie Motor Oil NHRA Gatornationals are scheduled for 11 a.m. ET on Sunday at Gainesville Raceway.