In a marquee matchup of two three-time world champions in the final round, Hight went 3.837-seconds at 330.39 mph in his 11,000-horsepower Auto Club Chevrolet Camaro SS, outrunning No. 1 qualifier Matt Hagan and denying Tony Stewart his first win as a NHRA team owner. After qualifying second for a second straight week, Hight was in the 3.80s in all four elimination rounds, powering past Paul Lee, Bob Tasca III and teammate John Force to reach the final round. He made the quickest run of eliminations in the final round to extend his points lead and pick up his 55th career victory after winning in impressive fashion in Pomona last week as well.

“We’ve got a lot of great guys on this team, and it was such a team effort,” said Hight, who picked up his third Phoenix win with his triumph on Sunday. “(Crew chief) Jimmy Prock, Chris Cunningham and all these guys worked hard all winter and it’s all coming together. It’s so hard to win one of these, much less two in a row. In this day and age, that’s amazing and it’s a big win for this team. We made seven runs in the 3.80s this weekend (including qualifying), so that’s pretty impressive. I’m very fortunate to get to drive this car. This is what you dream about, but it’s not going to get any easier with so many great drivers in this class.”

Hagan wrapped up a solid weekend with his new team, setting the track record in qualifying, and advancing to the final round for the first time this season and the 72nd time in his career with round wins against Terry Haddock, Alexis DeJoria and Tim Wilkerson. 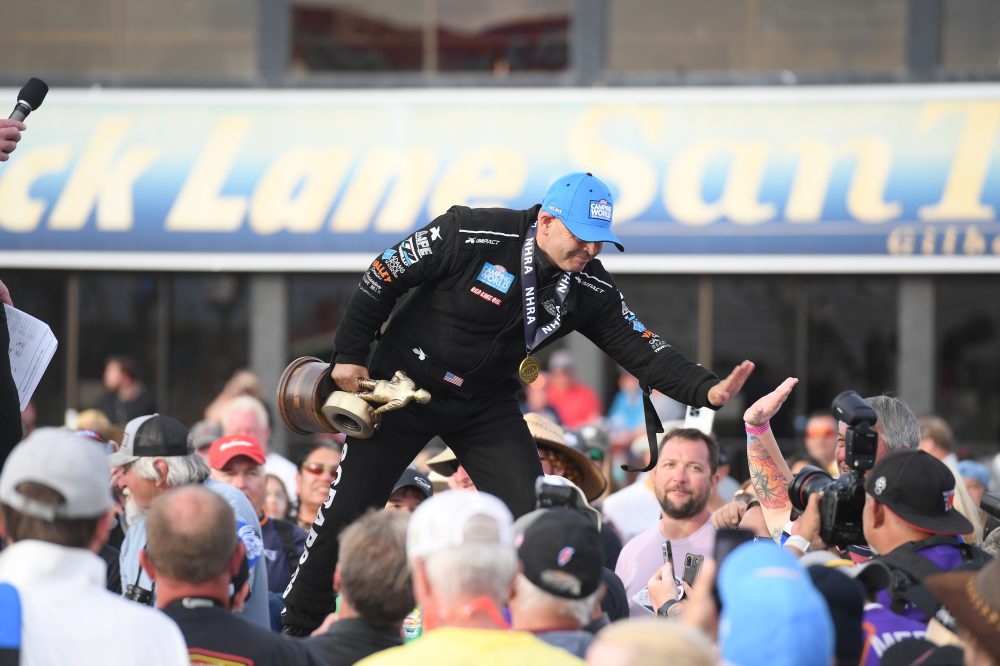 In just the second race with a new crew chief, Salinas grabbed an impressive Top Fuel victory, going 3.751 at 318.24 in his 11,000-horsepower Scrappers Racing dragster to knock off Clay Millican in the final round. It gives Salinas his fourth career victory, but also the second in his last five races dating back to last season, when he finished a career-best third in points. With crew chief Rob Flynn calling the shots, Salinas picked right back up in 2022 after his hot finish last year, knocking off Jim Maroney, Shawn Langdon and four-time defending world champ Steve Torrence to reach the final round. Salinas put together three runs in the 3.60s before the finals and he took over the points lead in the loaded Top Fuel class in the process.

“We went through quite a bit to get the right synergy,” Salinas said. “This NHRA racing, it’s a tough game. If you don’t have all the parts and pieces to keep it in place, you’re not going to do very well. Rob is a brilliant man, very calm and relaxed, and calculated. He told me he’ll see me in the finals. If you look at our runs, I was blown away. There’s a lot of good stuff going with this team. I’m very confident in where we’re going and what we’re doing, and these guys on this team are something special. I know we can run with these guys in this (Top Fuel) class, and I know we can beat them.”

Millican enjoyed a strong weekend in Phoenix as well, advancing to his 19th career final round thanks to round wins against Tripp Tatum, eight-time world champ Tony Schumacher and Josh Hart.

A week after advancing to the final round to open the season, Stanfield stayed red-hot and finished the job on Sunday in an all-Elite Motorsports final round, going 6.526 at 210.50 in his Janac Brothers Camaro to beat teammate Troy Coughlin Jr.’s 6.539 at 210.24. It gives Stanfield his fifth career win and first in Phoenix, and also the first since he became a father for the first time just last week. After qualifying second for the second straight week, he knocked off Alan Prusiensky, reigning world champ Greg Anderson and Mason McGaha to reach the finals. He went 6.503 against Anderson, posting the quickest run in the class in two years, en route to capping off what’s been a memorable couple weeks for the young standout.

“All weekend we had a good hot rod, and I did just good enough every round as a driver to win,” said Stanfield, who also took over the points lead. “I can’t thank the guys at Elite enough. I don’t think you could write (the last two weeks) any better than this. There’s been a lot of emotions and a lot of great memories, and I’m just really thankful for all of it. If I can perform well on the starting line, we’ve got a car and a team that’s tough to beat. It’s a long season, but we’ve got a lot of big goals and we’ll see what we can do.”